The video game franchise known as Call Of Duty (COD) has spanned well over a decade with nearly 30 games released on various platforms. The success of each release has helped it garner an ever growing following of hardcore fans and helped turn it into a household name. The attainment of becoming an international phenomenon has naturally led it to accumulating its own very substantial amount of detractors. Hardcore gamers look at COD as a video game solely for “casual gamers” who are by definition gamers who have inferior skills and only play the most popular releases of the year on console so therefore cannot be considered “true gamers”, at least in their opinion anyway.

Call Of Duty’s secret to success and survival is its ability to reinvent itself year after year with each new addition bringing something different to the table. Not only this but the developers know who their fans are and because of this the games have evolved over the years, this can be seen with the massive emphasis placed on multiplayer. In fact, its accomplishments have led other video game developers to create multiplayer only games in an attempt to get a small piece of the COD multiplayer community pie.

The series began with WWII and has since made its way through to Modern Warfare, back to WWII, on to the cold war, into the future in Black Ops 2 and stayed in the future with the recently released Advanced Warfare. Even though I wouldn’t call myself a fan of the series, I have played a COD game on every console since the GameCube. In fact, the very first game I played on the Xbox 360 was Call Of Duty 2. I’ve always enjoyed their single player campaigns and have some good memories of some fun sessions in the games various multiplayer modes. Strangely, unlike most people I do not buy the games for their multiplayer, shock horror. This was the case with Advanced Warfare which I bought to solely experience the single player after recently enjoying Black Ops 2 and Ghosts campaigns even if they had flaws. The great thing about COD campaigns is that they’re usually short but not stupidly short and they’re made with huge budgets so you’re almost guaranteed to get high quality, innovative content.

Call of Duty: Advanced Warfare is a military science fiction first-person shooter video game published by Activision. Sledgehammer Games developed the Microsoft Windows, PlayStation 4 and Xbox One versions of the game, while High Moon Studios developed the versions released on PlayStation 3 and Xbox 360, and Raven Software developed the game’s multiplayer and the Exo-Zombies mode. Advanced Warfare is Sledgehammer’s first Call of Duty title where they are the primary developer; following the supporting work they did on Call of Duty: Modern Warfare 3 alongside Infinity Ward in 2011. The game was released on November 4, 2014, but a special edition titled the Day Zero Edition, which came with bonus in-game content, was released on November 3 for people who pre-ordered the game. The game was not released on the Wii U, making it the first title in the series since Call of Duty: Modern Warfare 2 to not be released on either the Wii or Wii U.

Advanced Warfare, like the other Call of Duty titles, is presented in a first-person shooter perspective. The game features several significant changes; unlike other installments, Advanced Warfare does not use a traditional heads-up display (HUD); instead, all information is relayed to the player via holographic projections from the weapon equipped. The general gun play remains unchanged, apart from new mechanics, such as ‘Exo’ movements. These Exo movements are performed from the Exoskeleton, which can boost, dash, and sky jump. The game is the first in the Call of Duty series that allows the player to choose differing types of conventional weaponry; for example, the game features regular conventional firearms, but the player can choose to use laser or directed energy weaponry, both of which have differing attributes. In addition to Exo movements, the game features different Exo abilities, such as Exo Cloak, which allows players to turn transparent for stealth for a period of time.

The single-player campaign features one sole playable character, Jack Mitchell, as opposed to multiple characters in previous Call of Duty games. It makes use of pre-rendered cinematic cut scenes, similar to Call of Duty: Black Ops II, assisting in the story telling aspect of the campaign. After each mission, the player is given a certain amount of upgrade points that can be used to upgrade the Exo suit or weapons.

In 2054, Private Jack Mitchell (Troy Baker) of the United States Marine Corps, along with Private Will Irons (Paul Telfer) and group leader Sergeant Cormack (Russell Richardson), participates in a battle against North Koreans in Seoul. During the counterattack, Will is killed in action, while Mitchell’s left arm is severed, forcing him to be discharged from military service. After attending Will’s funeral service, Mitchell is offered a position with the Atlas Corporation, the world’s most powerful private military contractor, by CEO Jonathan Irons (Kevin Spacey), Will’s father, and is also given an advanced prosthetic arm to replace his lost one.

Meanwhile, a terrorist group named the KVA, led by a technophobic man named Joseph “Hades” Chkheidze (Sharif Ibrahim), begins staging numerous terrorist attacks, with the world turning to Atlas to stop them. Mitchell, along with Gideon (Gideon Emery), Joker (Jeremy Kent Jackson) and other Atlas soldiers rescue the Nigerian prime minister and capture a KVA technologist in Lagos, Nigeria during a technology summit. However, by 2055, the KVA’s attacks have become more sophisticated and Mitchell and his team fail to prevent the KVA from forcing a nuclear reactor meltdown on Bainbridge Island, Washington. 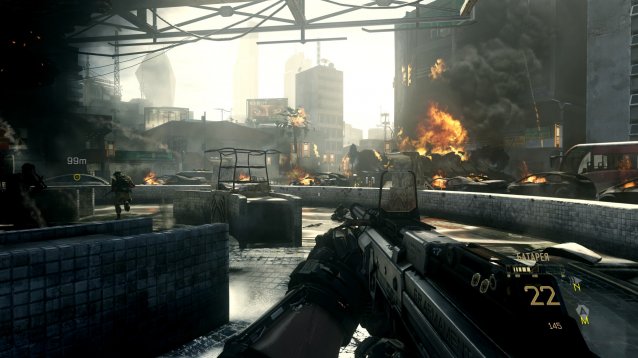 The KVA launch simultaneous attacks against nuclear power plants worldwide, irradiating numerous cities, killing thousands of people and putting national governments and militaries in turmoil. Atlas emerges as the dominant military force in the world by aiding civilians affected by the attacks and holding back the KVA’s rampage.

As a whole, I enjoyed the campaign even if the story is fairly predictable and quite cliché at times. The gunplay is solid and really responsive and as you can imagine the game is visually stunning, the motion capture is impressive and very lifelike. The acting is well choreographed and believable to the point that you can invest in the story and the plight of the protagonist/team mates.

Talking of Mitchell, he’s quite one dimensional and other than being Will Irons best friend I couldn’t really understand what it was that Jonathan Irons saw in him. Don’t get me wrong, he’s fine but nothing special and he doesn’t stand out much in comparison to previous protagonists.

On the other hand, I enjoyed the character of Gideon and thought he helped bring some much needed relief to the serious tones. Kevin Spacey does a fine job as Jonathan Irons and although his methods are extreme you can at least see what he’s thinking even if the execution is a little insane.

Each level involves some kind of different activity; whether that’s driving hover bikes, using mech suits, climbing buildings with magnetic gloves, using remote drones, boost jumping and so forth. It’s futuristic technology but no so over the top that it’s unbelievable it could be reality in years to come. There are a number of impressive set-pieces throughout the game including a high speed car/boat chase and a huge gunfight on a bridge. The issue I had was that there are a little too many scripted moments in the game where you basically just press buttons and watch events unfold without any real control.

The game and level design is extremely linear which is the game’s biggest fault, the landscapes are impressive but all they mount up to be are nicely rendered backgrounds with no freedom to explore in any way. Too many times I found myself just sitting there as the game basically took over on auto-pilot mode. The Exo suit adds some fun ability’s to play around with but they’re not particularly useful most of time, there is definitely some inspiration from Titanfall on display.

I didn’t spend much time with the multiplayer but it felt very similar to previous iterations minus the Exo abilities of course.

Call Of Duty: Advanced Warfare is yet again another solid entry into the yearly franchise. Although it does bring a lot of new and interesting ideas to the table, it’s in quite predictable fashion that it does so. Gamers looking for a new slightly upgraded COD to play online with friends will likely be pleased but that’s not why I play these games. The single player is short and linear but a blast to play through, especially if you haven’t the time to invest into the latest RPG. A lot of money was spent to create Sledgehammers vision of a military future with interesting new technologies at play and it’s easy to see the effort put in. The gameplay is as fluid as a FPS can be and it’s not too hard even on veteran.

(I struggled to find good images of this game, most are very low resolution for whatever reason).