Recent mobile versions of the classic Sonic games have served to remind fans just how good 2D Sonic games can be. Sega appeared to have paid attention to this & released Sonic Runners, a 2D classic looking platformer/endless runner. Sega have also paid attention to the popularity of in-app purchases as Sonic Runners is a free to play game with plenty of in-app purchases, most of which are pointless & not worth any amount of money.

The aim of the game is to get as far as they can within a level while collecting rings & gems to earn a high score. Running is done automatically with the controls catered around jumping to dodge obstacles such as spikes & pits while defeating enemies. Every so often Eggman (I still remember when he was Dr.Robotnik) pops up following a certain pattern for you to attack him & get extra rings.

These battles last a short amount of time before the rotund fella drops a bomb effectively starting the level again but at a faster speed & increased obstacles. As long as you have rings you can take damage once but once the top speed has been reached (by playing through a level several times) all rings are removed making it incredibly difficult.

The game controls well & feels fluid especially the faster it gets. While level designs do get tougher you rarely feel as though it was the games fault you died but rather you mis-timing a jump or your concentration slipping. 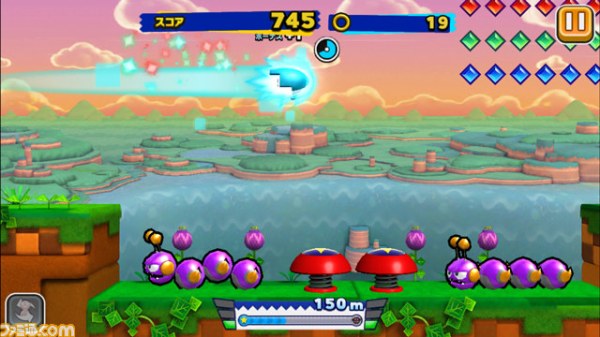 The level ends when you die & your score is then totalled up. You can carry on by spending red rings…the premium currency of Sonic Runners. There are two types of currency in Sonic Runners…normal golden rings & the larger red rings. The golden rings are used to buy single use items for levels, increasing the effectiveness of items & levelling up individual characters. These are in abundance & easy to earn but are spent just as fast.

Naturally red rings are much harder to gain & are used not only to continue a level but to use the roulette wheel, the most controversial thing in the game. 2 wheels…a premium wheel & an item wheel. A spin on the premium wheel will cost you a whopping 50 red rings with a range of prizes on offer such as new characters & & buddies. A spin on the item wheel will cost you a roulette ticket, earned in daily awards (normally for logging on or completing special tasks). 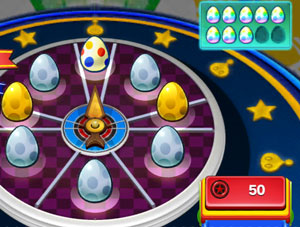 This section of the game is pointless & clearly designed to separate a fool from their money. It even has the audacity to tell you the odds of winning each prize…encouraging you to just have one more spin. So let’s break this down…the premium wheel costs 50 red rings. In the in-app purchase section you can buy 46 red rings for £2.99. How greedy is that? Why wouldn’t you round that up to 50? You can see exactly what they are trying to do & it is shameful behaviour. Worse yet all of these are currently marked up as ‘on sale’ (as of 13/01/16). 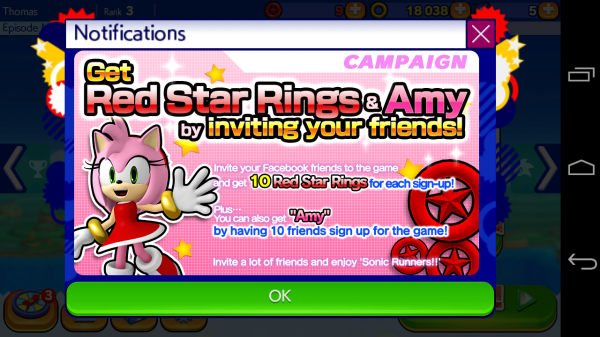 So if you had no red rings & wanted a spin on the premium wheel you would either have to buy the £2.99 package & the £0.79 package to get a total of 58 red rings or the £5.99 package that gives you 91. If you’re feeling really adventurous or stupid you can spend a massive £29.99 to get 456 red rings. Think about that for a moment…£29.99 for 9 spins on a premium wheel where all you might get are a handful of characters, buddies & extra one-time only use items. All of which offer so little to the overall game…and people wonder why all I see is greed in the free to play market.

…but no-one is forcing you to buy these, right? That’s always the argument in favour of in-app purchases which is totally fine, you don’t have to buy these. You can avoid them & crack on with the game with mostly no restrictions (run out of lives & you’ll either have to wait out a timer or *sigh* pay for more) however Sonic Runners is so light in content that it seems as though more time was put into working out the in-app purchases & pointless levelling up system then there was in creating levels!

Sonic Runners has bare-bones Sonic story…rescue cute animals, beat up Eggman…rinse & repeat. I didn’t see a different level until chapter 10. The same level over & over again, the same boss battles over & over again. The levels that I have played (I’ve played for about 10 hours & reached level 19 – more than enough I think) are average to look at with none of the style & personality from other 2D Sonic games.

There is a time attack mode where you play until the timer reaches zero. It offers a little variation but not within the levels themselves. You’ll be sick of seeing the same backgrounds very quickly. 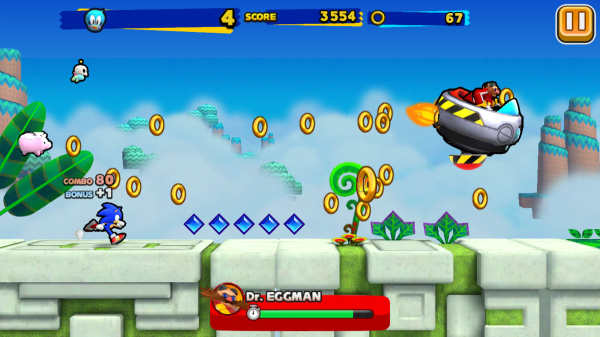 The game crashed several times during my hours…mostly when progressing between levels & normally after a sustained amount of play.

This just feels like a missed opportunity…had more effort been put in, a price set at the start to aid development costs than I could probably ignore the premium side of the game. There would be enough content to make this an enjoyable experience rather than the chore it is. Sonic’s legacy deserves better than this…

Another free to play, another bad game obsessed with getting as much money as possible before the masses wake up & realise just how bad it actually is.