The ninth in the long running Puppet Master series begins a fresh trilogy having finished & tied up the Andre Toulon story in the last movie.

Opening back at the Bodega Bay Inn in 1939 we see the events of the very first movie involving Toulon’s suicide as the Nazi’s arrive to capture him & take his puppets. Danny has been working at the Inn for his uncle, who owns the place & has become friends with Toulon.

Danny is bitter that his limp stops him being able to go to war so decides to help Toulon. Arriving at his room he hears the gunshot & is knocked to the floor as two Nazi’s push past him, giving him a chance to see their faces.

Danny finds Toulon dead in his room & discovers his puppets hidden behind a secret panel. Returning home to his mother with the puppets in tow he discovers that his older brother is to be shipped off to war next week. If that wasn’t bad enough his girlfriend is being wooed by a new employee at the factory where she works. 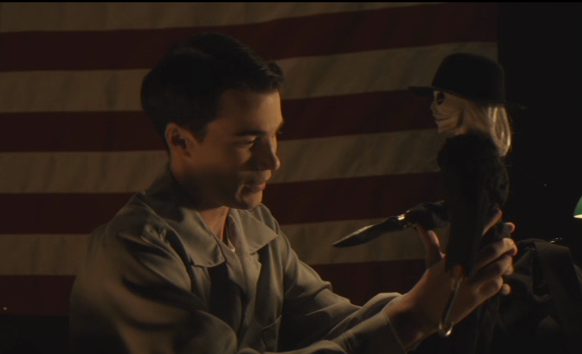 Unknown to Danny the two Nazi assassins are in his home town planning to destroy an American bomb factory with the help of a Japanese woman who is secretly under the service of The Emperor of Japan. When Danny sees that the new employee at the factory is actually one of Toulon’s assassins he realises that he has to stop whatever they are planning.

With the re-awoken puppets at his side, Danny goes to war with Nazi Germany! 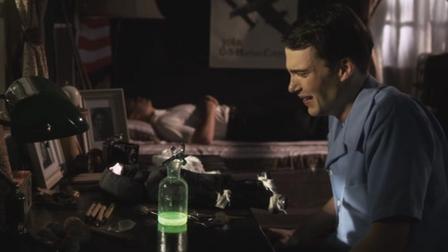 Axis of Evil is a mess of a movie filled with bad acting, terrible accents & a nonsensical story. In the lead role, Danny isn’t actually too bad although his desperation to go off to war begins to wear thin after a while. We get it, you want to go kill some Nazi’s but you can’t because of your bad leg.

His feelings of letting down his country never come across sincere & his instance that he can be useful lack impact although a particular scene involving his girlfriend’s boss leaves you feeling a bit sorry for him.

He is the standout actor & character of a movie that relies completely on out of date stereotypes. Now I’m not going to bash this side of the movie too much as it is set during World War 2 but the Japanese woman staying in a full Geisha outfit throughout the entire movie & the German’s saluting at every chance they could get is a pretty stupid way to stay incognito.

All 3 are terrible in their roles, lacking believability with the two German soldiers sounding more American than most Americans. It’s not a matter of them putting on accents to fit in, they are Americans playing Germans & doing an awful job if it. The woman who plays the Japanese Geisha has a real hard time saying a lot of her lines yet somehow ends up with most of them.

She fills in the gaps of the plot so many times that I only started paying attention when she was on screen as I knew she was going to say something important. Her stupid bickering with the Germans becomes so tiresome quickly & lacks any real depth. They claim to not like each other & are only working together as they have a common enemy in the Americans but it’s not convincing at all.

As you can tell once again the puppets are not at the forefront of the movie & only really come into play during the movies finale. The ending introduces a new puppet, Ninja who is infused with the soul of Danny’s brother who is killed by the German infiltrator.

The frantic finale sees the puppets finally in action killing German guards & taking some damage in their defence of their master. A cliff-hanger ending sees the Geisha escape having captured Tunneler, Leech Woman & Jester! 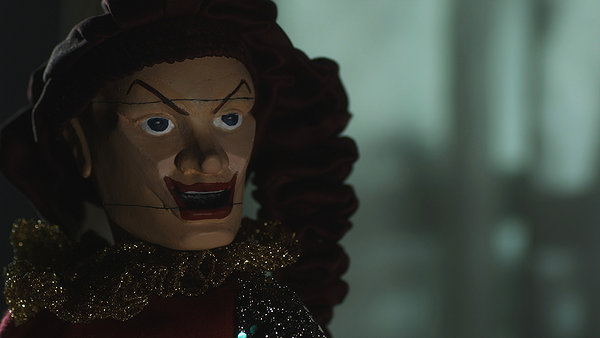 The first in the new trilogy is an average entry in a pretty lacklustre series overall but with even more new puppets to be introduced in the next movie it can only get better.