The popularity of the Walking Dead TV show has seen a few attempts to replicate its success within the gaming market with mixed results. On the positive end of the scale we had the Telltale interactive story series of The Walking Dead & on the negative end we had The Walking Dead: Survival Instinct.

Zombie games aren’t anything new so The Walking Dead doesn’t have any fresh ground to tread. Go for an all-out action game & you lose what makes the show so compelling, it’s characters. Like many popular shows or movies before it, some things just don’t work in game form.

The Walking Dead: No Man’s Land attempts to prove that this isn’t the case mixing turn based combat with resource gathering & city building (well more like camp building).

You control a group of survivors escaping from Terminus & it’s your job to keep them alive. They run into the character Daryl Dixon who agrees to help them survive within the zombie-ruined world.

The story is built around 10 episodes & the search for a place known only as Eden. The missions within episodes are launched via the world map which is accessed from your camp. Initially a modest hovel with decent protection from the zombies clawing at your walls as the game progresses you can upgrade buildings & add more to help speed production up.

While not the bulk of the game it is vitally important that you concentrate a lot of time upgrading buildings such as the training facilities & medic tent. These two in particular are probably the most important as upgrading your survivors & healing them quickly is the only way you’re going to be able to progress the story.

The bulk of the game involves completing story missions or scavenging for supplies. Once you’ve chosen your mission you’re transported to a small area with simple tasks such as gathering supplies, rescuing someone or just escaping from the zombie hordes.

Your survivor’s capabilities will make the difference with different types & skills available. Close combat isn’t usually advisable against zombies but silently dispatching them as you move across an area is often the best tactic. For risk takers there are plenty of gun-wielding characters, powerful & very useful for taking out multiple zombies but the noise they make attracts more potentially putting your escape route at risk. 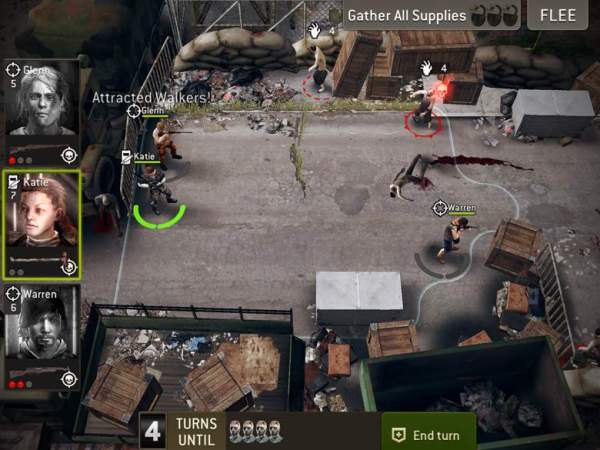 I really enjoyed the strategic style of No Man’s Land gameplay, getting the balance right depending on the mission takes thought & getting it wrong will see you punished. Get used to your survivors taking damage; this game gets difficult very fast.

Frustratingly your progress will be halted quite quickly as the game has some mean difficulty spikes. The problem lies within the upgrading system for your survivors & ties directly into the in-app purchase side of the game.

No Man’s Land’s currency comes in 3 forms; first we have supplies generated from your farms & found in missions. Supplies are used to upgrade buildings making them the most important of the three. Upgrading your storage facilities & farms early on is a must but be warned they are very expensive to upgrade & all come with an in-game timer. For example a Level 5 farm would cost 56,000 supplies & 6 hours to build, after 3 days of on/off play I have 22,000 supplies.

The second currency is experience points earned through survivor tents & found in missions. These are mainly used with the levelling up of survivors & weapons which makes it seem more important than supplies except you’re limited to how high of a level you can actually get them too depending upon the upgrades of your training facility. A level 6 training facility will limit you to a max survivor level of 7; cost 59,000 XP & 9 hours to build.

All of the upgrading & levelling up can be incredibly boring & time-consuming & playing supply run missions over & over again just isn’t an option as you need fuel to play missions, run out & you’ll have to wait on another timer. Get used to timers in this game…

The final currency is the premium one, gold. Used to instantly upgrade or level up buildings & survivors as well as a host of other ‘uses’ it is in short supply & rarely gifted out (although compared to many other games that run a similar system it’s way more generous).

You’ll be tempted to spend the gold you have early on…don’t save & it will be much more useful later on.

The most outrageous thing regarding No Man’s Land’s in-app purchases comes from the outfits. You can dress your survivors in outfits from the show but the prices are insane. Want to make one of them look like Rick Grimes from Season 1? 2000 gold please.

For £14.99 you could buy Rick’s Season 1 outfit & Carol’s Season 4 outfit. Is there anyone out there dumb enough to buy these? There is no value in the slightest.

So what else? You can randomly find cell phones in the game that allow you to call more survivors to your camp but you have limited space so balancing your team is very important…although you can buy extra slots for gold, of course.

You can join online guilds & undertake weekly challenges earning stars for your group to see who tops the leaderboards as well as earn bonuses for yourself & the rest of your guild. It’s a clever little extra that helps give the game much needed longevity.

The Walking Dead: No Man’s Land does look pretty good with a nice amount of detail within the game world. A lot was made of the character Daryl (his face is the apps tile) but he is barely in it & voiceovers aren’t used (text communication only). There is satisfaction to be had with the game, its strategic gameplay is addictive & for a while good progress can be made. When the pay-walls & timers come down, they come down hard & it is these that will either drive to pay real money or abandon the game all together. There is no fun to be had logging on every few hours & collecting what resources have generated but it’s a popular way to play for a lot mobile gamers.

The Walking Dead: No Man’s Land is worth a few quid, it really is. However developer greed ensures that the couple of quid you spend will be gone within 5 minutes of pressing the upgrade buttons on your buildings but what will you actually have to show for it?

The Walking Dead - No Man's Land