Livid is a French horror film that tries way too hard to be an atmospheric, moody horror film but instead ends up being a boring, way too dark horror film.

It’s a huge let down as it has a lot of promise in the opening 20 minutes.

Lucy is in training to be a home-visit nurse for the elderly & sick. Her trainer is an old, bitter lady called Mrs Wilson. Her attitude towards the patients they visit is poor & it is an eye-opener to see just how little time they’re able to spend with the elderly.

The final patient they visit is a reclusive rich woman who lives in a remote mansion. Lucy is told to wait outside by Mrs Wilson but decides to follow her anyway. Inside she finds Mrs Wilson at the bedside of an elderly woman who appears to be on some sort of life-support system. Lucy is told that the woman, Jessel, was once a ballet teacher but is now in a coma.

Mrs Wilson decides to tell Lucy that legend says Jessel has a secret treasure hidden somewhere in the house.

Later that night Lucy repeats this information to her fisherman boyfriend, Will who decides he wants to rob her house. Lucy puts up a fight for all of 2 minutes before agreeing to it. The duo drag Will’s brother, Ben along for the ride & off they go…to rob an old lady who is in a coma hours after Lucy was going through training to help people like her.

So under the cover of darkness they break in through the basement & begin exploring the house. In darkness the house is a much more eerie place but the trio’s constant bickering is an annoying distraction. Lucy continues to moan about being there but is more than happy to wander off alone. As she explores she finds a child’s room with creepy stuffed animals. 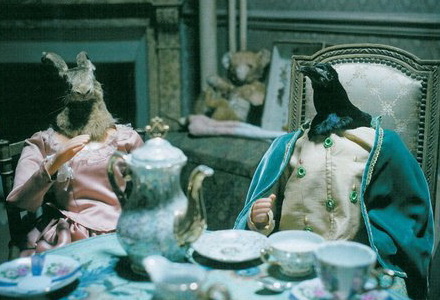 A horrible jump scare, one of the worst character reactions ever & the movie is beginning to flounder. You see one of the stuffed animals spins around in its chair suddenly & Lucy acts like it is a normal thing to happen. No confusion, no investigation to see if there is some sort of wire that activated…nope, she jumps then cracks on wandering around alone.

After finding a locked door Lucy remembers seeing a key around Jessel’s neck. Not content to just rob the house, now they are happy to start robbing her comatose body as well.

The key leads them to a room with what looks like a stuffed girls body dressed in a ballerina outfit but with a scared face. Lucy having heard about Jessel’s mute daughter believes this to be her & uses the key to activate the ballerina. It’s effective & creepy as she stutters & turns like a robotic music box.

Noise above them, in Jessel’s room, suggests that the ballerina being activated might have woken up more than they expected. Deciding to leave they find their way out now barred & Jessel is missing from her bed.

The trio of robbers are now being hunted by whatever Jessel is but just why does she have her dead daughter trussed up as a musical ballerina?

The answer is simple yet told in an incredibly complicated way that will leave you scratching your head.

It’s a terrible distraction from the more brutal moments that follow Jessel’s awakening. The blood flows freely & looks very authentic but it’s impossible to care about the trio’s plight as they have proven to be such unlikeable people up to this point.

A late twist lacks any impact as an earlier scene pretty much gave the game away. It’s another plot point that lacks any real impact & doesn’t really make a whole load of sense either.

The film stutters to a near stand-still by the end & some cool looking effects do little appease the frustration felt over such a lacklustre ending.

Livid thinks it is something way smarter than it actually is & manages to tie itself up in a convoluted story that lacks bite. Good gore out of context means nothing & it’s scares are dulled by character reactions.