The basic premise of this colourful zombie game is to infect a set amount of human characters within a small area. Chose one of several zombie characters (all with their own benefits & drawbacks) & make your way through 50 stages of varying difficulty.

The idea is to cause a chain reaction infecting people who will become zombies themselves & infect others. By the end you shouldn’t have to any of the work yourself as all created zombies will running amok. 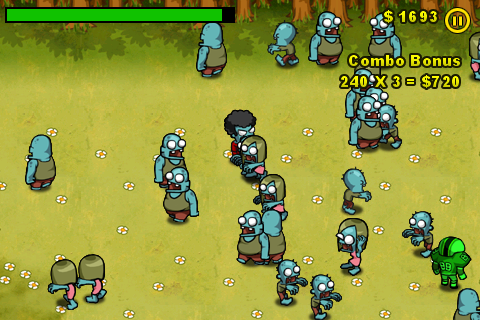 The games difficulty is balanced by constantly decreasing health & humans that fight back in numerous ways. Later levels will see you need to infect baseball wielding thugs, soldiers with guns & even ninjas!

Health can be replenished by biting humans but you need to be careful as too much biting will result in them being eaten completely. This does grant you a large health boost but means you have 1 less zombie to help infect the rest. The tougher the human to bite, the more health you’ll regain.

The controls are simple & easy…a small on-screen control stick is well placed in the bottom left hand corner which moves your zombie in different directions. Walk into an uninfected human (infected have a green tint about them before they turn) to start biting them. To stop biting them just tap the button that appears on the bottom right hand corner of the screen. 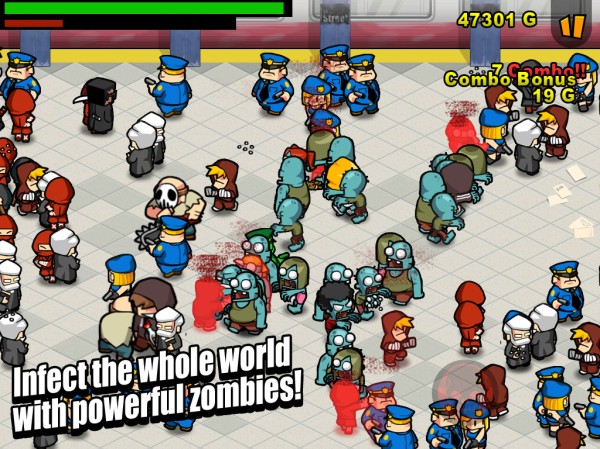 The main game has 50 levels to infect your way through but you can level up your characters to make it that much easier. Money earned in a level (even if you fail it) can be put towards more health, speed, damage, armour, eating, recovery & endurance. You will notice the improvement in your character so it is more than just padding.

In addition to the 50 campaign levels there is also an infinity mode (unlocked when you’ve first finished the campaign), survival mode that sees you trying to earn large scores for as long as possible & blitz mode that turns a timer on. 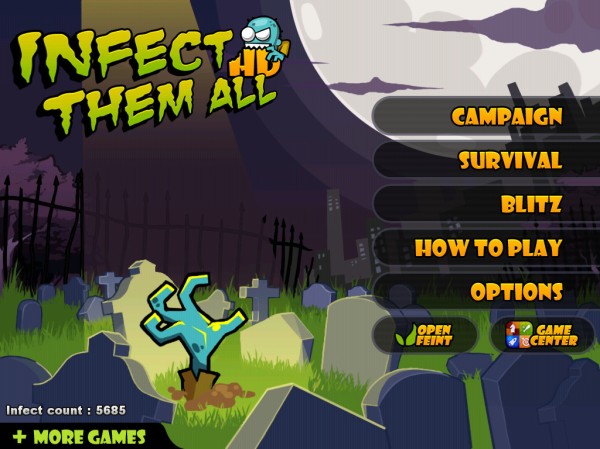 It’s a fun little game that looks nice enough & has a fair amount of replay-ability. They probably shouldn’t be trying to plug the sequel when you first load it up though…