Hellfest 2014 marked my first foray to a metal festival outside of the UK, something I had never really considered. However the killer line-up, well-known quality & decently priced packages tempted me, my wife & some friends this year.

It was a unique experience, extremely enjoyable but not one I feel I would want to do yearly. One of the earliest biggest surprises was just how much the festival felt like it belonged…the set-up made it feel like it was always meant to be here rather than it just turning up once a year. This was no more obvious when it got dark & every building was wreathed in flames….it looked like Hell.

During the day the super-hot French sun made sure we all felt like we were burning in the pits of hell. That was something we were un-prepared for & a few of us got a bit burnt ‘cause of it.

We also weren’t prepared for certain aspects of the festival & we suffered because of it, frustratingly so. The biggest problem & the biggest negative I can throw at Hellfest is the drinks situation. There just aren’t enough places to buy them. In the campsite there isn’t a single drinks vendor…you have to leave the campsite & go to the bar near the metal village area. Even then it’s only 1 bar (albeit fairly big) but if you want a soft drink you have to join the queues of beer drinkers. Horrible idea…

You couldn’t even buy a soft drink from a food vendor!

A lack of toilets in the campsite is always a problem at most festivals & Hellfest did little to improve that. The arena though has loads & you rarely waited more than a few minutes.

Everything that was wrong in the campsite was right inside the arena. There were loads of bars perfectly placed around the stages & if you were smart it became clear early on which ones always the least queue. The food stalls were kept away from the stages & in a confined area which I thought was a great idea. As well as less mess around the stages it also meant better food stalls although the language barrier meant we struggled ordering some of the better looking food.

It was clear early on that the 2 languages you would hear were French & English & it made the whole experience much more enjoyable.

The main beer of choice was my favourite, Kronenberg & it came in 3 sizes….half, a pint & a pitcher. The beer was always cold & came in unique cups that you could keep & reuse saving money on your next beer. A pint would set you back 5 Euro or 5 tokens (you have to exchange Euro for tokens to get drinks).

One of the things that impressed me more than any were the stages. The 2 main were next to each other with one being set up for a band while the other played. When one ended the other started 5 minutes later meaning very little waiting time.

The same applied to the Temple & Altar stages inside the big tent (my favourite stages). Then there was the smaller & more confined stage, The Valley & the small outside stage hidden away around the back, The Warzone. Everything was in decent walking distance which meant we were able to get around & see plenty of bands. 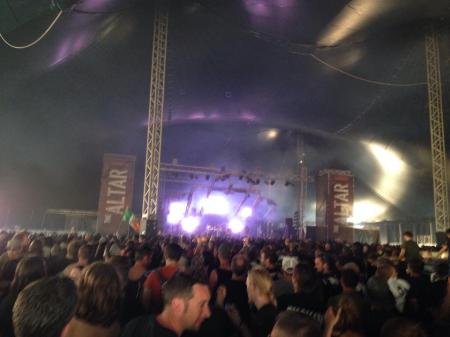 …and plenty of bands we saw.

Our first band we checked out on the Friday was Brutality Will Prevail (6/10) who tore up the Warzone stage. As an entry band they got me in the right mood for Satan (7/10) on Main stage 1. I expected a darker edge to the band but still enjoyed them. I caught the final song of Trivium before Rob Zombie (8/10) let loose, I loved it & thought House of 1000 Corpses sounded killer live. The unfortunate thing was that we had to leave early to catch another band. What band would make me leave Rob Zombie early?

Turisas (10/10) on the Temple stage of course. I can’t put into words just how good they were; being part of a crowd that loved them as much as we did made it one of the talking points of the weekend. We Ride Together at Hellfest will be one of my long-time memories.

Enslaved (5/10) were ok but just couldn’t follow what came before & were facing the might of Watain (10/10) afterwards. As headliners of the Temple stage they absolute blew everyone away, unbelievably tight with a stage show to match. Black metal done right!

The final 2 bands of the night for us were Slayer (9/10) who were on excellent form but we left just before the end to catch the start of Electric Wizard (5/10) who were just too slow for exhausted minds & feet.

An early start for us saw us arriving in time to catch Miss May I (6/10) who seemed to drag a bit (for a 30 minute slot that is not good). Skid Row (8/10) followed & while initially sceptical being big Seb Bach fans we were won over & really enjoyed it.

A bit of Gorguts (6/10) entertained before we attempted to see Clutch. Now I’m not adding a score to the band because the Valley was so rammed getting in was out of the question. We stood around outside for a bit but decided we weren’t enjoying not seeing shit so went to see Hatebreed (8/10) & we were so glad we did. They rocked!

Straight after came the always solid, Soulfly (9/10) who blew me away. So many good songs mixed with classic Sepultura stuff. We watched 2 songs of Deep Purple (2/10) & promptly buggered off before we fell asleep. Next up was Philip H Anselmo & The Illegals (8/10) who were great albeit a wee bit disappointing. You see with all Phil’s fucking around on stage we probably could have gotten a few more songs. It was great to hear Superjoint Ritual stuff alongside some Pantera classics but the only time the crowd came to life was during those!

The final band we saw was a punt knowing nothing by them, Monster Magnet (9/10) who turned out to be absolutely awesome. A real surprise & one we’ve talked about ever since.

We were up at stupid o’clock to make sure we were there to see Scorpion Child (9/10) who were so impressive on the stage. Crowbar (8/10) kicked ass as they always seem too & Zodiac (6/10) impressed us knowing nothing about them before The Black Dahlia Murder (7/10) helped destroy our ears.

Dark Angel (7/10) were fun but we were just waiting around for the next band. The band of the entire weekend, Behemoth (10/10). It was unbelievable with songs that just sounded impossibly heavy mixed with an amazing stage show & dripping with anti-religious zeal. Behemoth were out of this world. We watched around 20 minutes of Misfits (4/10) but found the sound off so rushed off to catch most of Soundgarden (7/10).

Emperor (10/10) were unbelievably good & an album that is 20 years old sounds as fresh as ever. Black Sabbath (6/10) were an interesting band in the end. Vocally Ozzy sounded off & a lot of his banter got tiresome after a short-while (how many times can we show our hands?). They have the songs to boot but sometimes they are given a free ride because their Sabbath. After an hour we decided to go & check out 1349 (5/10) who were just turned up to 11.

Hellfest 2014….a weekend to remember with some of the best performances I’ve seen by some bands. There really weren’t many let-downs & we discovered a few new bands as well.