There is so much to love about They Live. Aliens that live among us manipulating people with subliminal messages, Rowdy Roddy Piper in the lead role, a fight scene that just keeps giving, awesome dialogue and much more.

They Live, while not initially successful now has a cult following for a reason, it’s a classic of the 80’s horror/action era.

John Nada (played by Piper) has come to LA looking for work. He finds something at a construction yard and meets Frank (Keith David) who takes him to a kind of shanty-town where he lives. John is a quiet man trying to live the ‘American dream’, keep his nose clean and an opportunity will come his way. One night while watching TV with a group the feed is interrupted by a man shouting about ‘being kept asleep’ and how the people need to ‘wake up’.

He then notices odd behaviour at the nearby church but before he can find out anymore the police arrive, start arresting people and destroy the shantytown. John escapes & the next day comes back to find out just what was going on in the church.

The only thing he finds is a box of sunglasses. Confused he tries a pair on & discovers that these sunglasses are special. He can now see the truth; he has ‘woken up’. 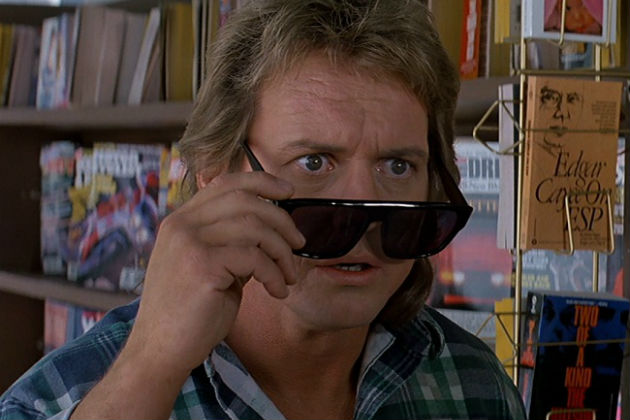 Around him media and advertising hide subliminal messages demanding that people obey, consume, reproduce and conform. That magazine advert showing a bottle of perfume? Consume! The billboard showing a bikini model enjoying the beach? Reproduce! The TV presenters explaining the rights and wrong of a particular situation? Obey!

…but just who is to blame for this? Well the sunglasses reveal that to John as well. Around him, living among humans are aliens whose heads resemble skinless skulls. John is naturally freaked out which draws the attention of the aliens and some local police. John fights back & takes there gun before going on a bit of alien killing spree.

This sequence has one of the most immortal lines ever spoken in film happen in a bank.

“I have come here to chew bubble gum and kick ass, and I’m all out of bubble gum”

John Nada is a total badass but now on the run. After facing off against his one-time friend Frank in an alley (the fight scene is utterly fabulous and goes on for ages) the pair hooks up with a resistance cell that has a plan to reveal the aliens identity to the whole world.

What happens after? Who knows but at least the truth will be revealed.

They Live really is a great movie that only stutters in a few places. It’s a pity that the totalitarian oppression kind of gets put on the back-burner in the latter half as the movie has a more action vibe. The message the film was trying to say at the start is lost in a hail of bullets and wonderful reveals.

The acting is great, even Piper does well in his role being convincingly badass yet soft when needed. At times he is a little too blasé about the situation but he gets so many great lines it really isn’t that big of a deal.

The effects are great too. The switch between what John’s eyes see and what the sunglasses show him looks so cool & the aliens are creepy as well as appearing vulnerable. 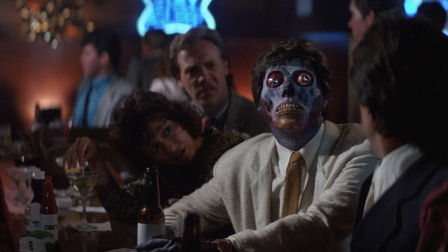 I really liked that, these weren’t tough, mean aliens. The only way they can get what they want is by staying hidden among the people, dealing with the rich and famous only and forcing subliminal messages through media & adverts. It’s threatening because it’s so real but not so much that it seems as though there is no way out for John and the resistance.

If you’ve never seen this movie, now is the time! 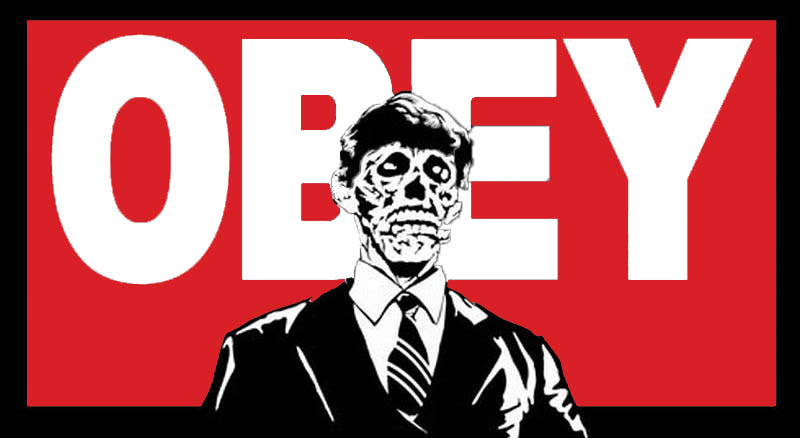