So here we are, the final official Halloween movie to be released outside of any remakes. Up to this point it’s been a fun ride with mostly good movies, some great moments, plenty of bad moments & confusing continuity.

The end to Halloween: H20 should have meant this movie was never made but here we are…how bad could it be? Well…I hate it, I really do.

Halloween: Resurrection is a terrible Halloween movie; it is a terrible horror movie trying to gain a new audience with tired slasher movie tropes that already feel incredibly out-dated. Watching it back now I just can’t understand what they were thinking… and don’t get me started on Busta Rhymes

So Laurie decapitated Michael at the end of H20 huh?

That ends it right? Nope, ‘cause they found a way to resurrect him in the dumbest way possible. In H20 Laurie stabbed him with the flagpole & knocked him off the balcony supposedly killing him. He was wheeled out on a gurney & put in the back of an ambulance & that is the ambulance that Laurie jumped in intending to make sure Michael stayed dead.

Rewind a bit & in Resurrection we see that a paramedic checking on Michael as he lay amongst the tables. He was grabbed & his vocal chords crushed leaving him unable to speak. Michael dressed the unconscious paramedic in his outfit (thank goodness he was the same build & weight) & it was this dude Laurie killed with the axe at the end of H20.

I know, I know…what the fuck kind of crap is that? You only have to go back & watch H20 to see how stupid that is. How many plot holes exist if this paramedic is the one in the ambulance & not Michael? It cheapens the end of H20 as well.

I think I would have preferred it had they just pretended the ending to H20 hadn’t happened!

So all this detail is revealed by workers in the sanatorium that now houses Laurie Strode who is heavily medicated, or so we think. She has been pretending to take her pills but has been hiding them in anticipation of Michaels return. She is prepared for him when he does arrive & they end up on the roof where she traps him hanging him upside down over the building.

Sadly the memory of what she did in H20 haunts her & she 2nd guesses herself reaching to take his mask off. Michael grabs her & they both go over the edge where he jams the knife in her back & throws her to her death.

So he finally got her, huh? Well that ends the Halloween story…no Laurie Strode, no need for Michael to be around…wait, it’s only been on for 15 minutes!?

Ugh…this is where things get even worse. 6 empty-headed, cardboard cut-out stereotype college kids are all selected to take part in a live internet broadcast by Dangertainment headed by Busta Rhymes (Freddie). They are going to have cameras strapped to their heads, go into the ‘old Myers place’ & uncover any clues as to why Michael might have murdered so many people.

The night they choose to go into the house (that is not only still standing but appears to be a free-for-all) is the same night Michael returns home for reasons we are left to guess at. He isn’t best pleased by this intrusion & sets about doing what he always does. 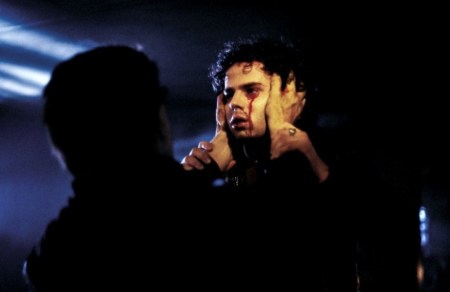 The 6 chosen students are just awful & this is the first Halloween movie where I’ve wanted Michael Myers to murder the shit out of everyone & he does mostly. Of course there has to be a heroine, someone for us to root for. I was disappointed she didn’t get killed as well.

As they explore capturing footage on their head cameras (yes, it is one of those films) it becomes clear that Freddie has set up props & stunts to freak them out & increase his online viewership. Conveniently when the actual deaths start happening everyone watching thinks its part of the show.

Everyone expect the heroine’s online beau who sees it for what it is & starts to help her survive using the power of the internet.

Poor Michael, he’s just not set up for the modern age.

As much as I dislike the college kids all my disdain is aimed at Busta Rhymes who is just the worst thing I’ve seen in a Halloween movie, ever. His lines are delivered in such a clichéd way that I couldn’t wait to see Myers jam a knife in his face.

A clever development that saw Freddie dressing up as Myers attempting to freak out the college kids but runs into Michael is ruined by terrible dialogue & the insistence that Rhymes shouldn’t die in the movie. I may never get over him fist-fighting with Michael Myers…he even freakin’ wins knocking Michael into cables & electrocuting him. 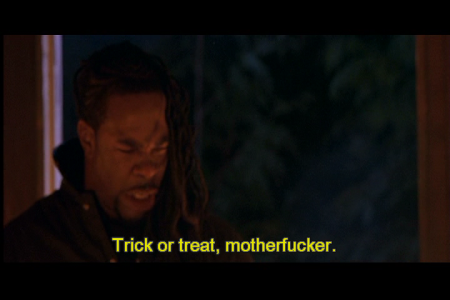 Not killing him though…of course not, this time we get a sequel bait ending of Michael opening his eyes.

I’m struggling to find positives in this movie but it is near enough impossible. I just can’t get over how poorly it is put together & how it has lost sight of what made Halloween a tense &, at times, scary movie. I can’t praise the death scenes as we’ve seen them all before & there isn’t anything that particularly stands out.

They shouldn’t have killed off Laurie Strode…

I can’t say I’m disappointed as I didn’t expect much coming in but they still managed to go lower then my already low expectations. Jamie Lee Curtis is briefly in it & that helps lift the opening 15 minutes but the film is still a plot-hole mess that helps destroy any semblance of threat from Michael Myers & shows you just how bad some actors can be. Oh & Busta Rhymes fucking sucks…