As the end credits rolled the only thought that was going through my head was this… how in the hell can you make a Doom movie & not set even part of it in Hell!?

Ok, so good video game movie adaptions are very hard to come by. There are so few & what most remember are the bad ones (Super Mario Bros, Alone in the Dark, Max Payne, House of the Dead). Doom could have been something, it really could have. A decent cast with a story that screamed bloody, over the top action. It’s frustrating just how much of a let down this adaptation is.

The year is 2046 & a research facility on Mars is under attack by something unseen. A distress call is sent out & a group of heavily armed marines are sent to investigate the facility. The marines are a group of one-dimensional characters that we’ve seen in every action movie ever.

We have Reaper (Karl Urban – which was a nice surprise), whose sister works at the facility. They are estranged having fallen out after the death of their parents (also on Mars). Reaper is our hero of the movie, something that isn’t instantly obvious because of Sarge.

Sarge is played by Dwayne Johnson (back when he was still being called The Rock in the credits) & is instantly likeable even if his dedication to the mission raises the odd eyebrow. That dedication is a major plot point later in the movie making for a seriously laughable final battle. 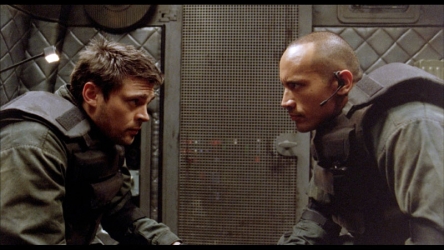 Then we have Duke, a cheeky & flirtatious character, Portman who is the sleazy troublemaker, Destroyer is the silent veteran who prefers to let his gun do the talking, Goat is the highly religious member of the team, Mac barely gets a line & The Kid has ‘dead man walking’ written all over his face.

That’s the team & it’s clear from the start that only Reaper & Sarge are likely to survive this.

Arriving on Mars they find the facility deserted but with signs that something bad has happened. It’s reminded me so much of Aliens but lacking the same level of tension & intrigue. 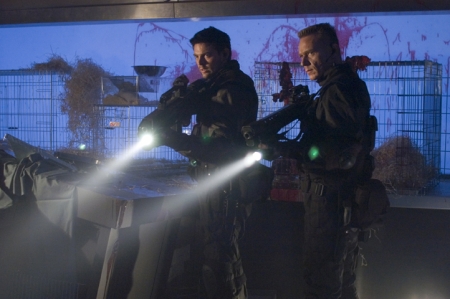 One of the few survivors they discover is Dr Samantha Grimm, the sister of Reaper. How she survived is never really explained nor is her complete lack of understanding of just what happened to the facility. Sarge gets more & more frustrated with her lack of answers, something that I can completely relate too!

It turns out that an archaeological dig on the surface of the planet discovered skeletons of an ancient race that were enhanced. They had an extra chromosome that gave some of super human powers while others it transformed into monsters. It’s these creatures that are running amok in the facility infecting the staff & killing everything else in their path.

Such a disappointment, such an absolute disappointment as the movie was doing a fair amount right at first. It felt like Doom with the soundtrack, dark corridors & general feel of death but once the monsters are revealed it just descends into a boorish & mindless mess that drags on for far too long.

Doom is a game that’s all about the action & gore but the movie needed to have more plot to sustain its running time.

The acting is standard with only Dwayne Johnson really showing off what would make him such hot property in the years to come. Karl Urban really lets himself down with a frustrating performance that only improves when you don’t have to see his face.

I am talking about the famous ‘first-person’ sequence that comes near the end of the movie. For a couple of minutes the viewer steps into the shoes of Reaper & we see things from his point of view. He makes his way through a part of the facility killing everything in sight in classic Doom style gameplay. It’s damn cool!

The end result is a movie that missed out on what makes the games so compelling, a movie that is overly long & light on action for quite some time. Add that to characters we’ve seen time & time again & a final battle that is downright silly. Doom is one big let down.