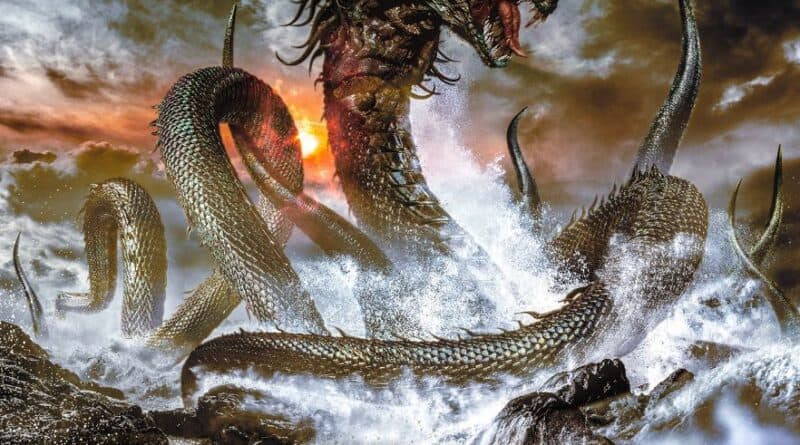 The Swedish symphonic metal band, Therion, will release their 17th studio album, Leviathan, on the 22nd of January via Nuclear Blast.

Therion have been almost an ever present in the metal world. Since their formation as a death metal band, under the name Blitzkrieg, in 1987 to the name change to MegaTherion and then Therion, to the the switch in style that came more as evolution than a change of direction. They have just been a constant, releasing an album every couple years for the majority of my life. Led by founder Christofer Johnsson ( guitars, keyboards, programming, orchestral arrangement) the band have changed a lot over the decades, as you would expect. Christofer is the only remaining original member but is surrounded by exceptional talent.

Leviathan is 11 tracks and around 45 minutes of symphonic metal goodness. As a band with such a lengthy career, you may wonder what is left for them to do? Well frontman Christofer Johnsson explains exactly that.

“We have done the only thing that was left of all the different angles to explore. We have decided to give the people what they kept asking for. ‘Leviathan’ is the first album that we have deliberately packed with Therion hit songs.”

The album opens with The Leaf on the Oak of Far. A catchy number if ever there was one, especially with the opening riffs and beats. It’s an interesting and layered track with a wide range of instrumentation on offer and an even wider selection of vocals. Female led verses play off with backing choirs before the male lead vocals jump in towards the chorus. The chorus itself jumps back into a wonderfully harmonious choir all over power chords and orchestral flourishes. There is a lot happening but it works well.

Marko Hietala (Nightwish) adds vocals to the following track, Tuonela. It has nice dark groove to the guitars and drums with fiery vocals. The underlying orchestral score enhances at all the right places and the female vocals are to die for. I really like the chorus again, which has loads of backing vocals and a tidy little lead guitar line. The title track, Leviathan, comes next and is a slow building song. Again, the choirs and use of them is faultless and gives a nice folk tinge to the track. In fact the whole song, as it continues has a heavy folk vibe in the mix of vocals and the melody with which they are delivered. I like it.

Die Wellen der Zeit has a gentle orchestral intro that leads into glorious female vocals. It’s a really soft start but insanely listenable. Made even better as the choir joins for the chorus. Ai Dahka brings a bit of heavy back with a nice rumbling riff and a fiery drum beat. Orchestral flourishes join in to add a bit more power before the range of vocals takers over with high pitched female operatic notes and deeper male choir vocals. The two working perfectly off of each other while the lead guitar blazes away.

Eye of Algol is a solid track bringing in a thumping drum beat and deep bassy riff. The vocals give us clean female vocals backed by dark, growled vocals before they all come together with a choir and opera singer to create a wall of harmonious vocals. There is a really neat solo in this one too where we see the orchestra fade back to allow the more traditional metal instruments time to shine. The longest song on the album comes next with Nocturnal Light. It’s not massively long, just over 5 and a half minutes but it gives Therion plenty of time to add in a bit of everything. A layered build up, catchy drum beat and slow riff. The track evolves as it goes with a huge orchestral score, lots of differing vocal harmony and plenty of impressive drum fills and folkish leads.

Great Marquis of Hell comes next and is a much shorter affair at just 2 and a half minutes long. It works well though and makes for a faster, more energetic track led by a quick drum beat. The vocals are fantastic and you get a real power metal vibe. It’s more simple, due to length, but they still have enough time for chorus enhancing orchestral moments and a fiery solo. I think it may be my favourite track so far. So with three tracks, left, we move into the closing section of the album starting with Psalm of Retribution. This is another banger. I love the slowed down thump of the drums and the darker, satanic chanting. The same makes up the chorus alongside a huge chug of guitars. The vocals are, of course, magical from all angles and there are plenty of intriguing orchestral elements blended in.

The penultimate track is El Primer Sol and the hits keep coming. There is a nice mid tempo rhythm and the vocal directions are interesting. The chugging guitars join in when the choir starts to create an epic soundscape. It’s a quirky track, but fun to listen to. It has some odd, in a good way, melodies and vocal styles. It freshens the palette a bit as we head into Leviathan’s closer, Ten Courts of Diyu.

It’s an interesting closer. It does sound similar to a lot of what has been heard before but still captures the imagination. It is a bit of a slow burner, eventually growing to gargantuan size. Female vocals lead the song, with choirs backing up throughout. The orchestra is front and centre, with even drums sounding a little further back in the mix. It’s layered and articulate, if not just a little flatter in comparison to some of what came before.

Overall, my main thoughts coming out of Leviathan are that I am seriously impressed, the music is gorgeous, the vocals are mind blowing but, simultaneously, how I would have loved just a little more from the guitars. It often feels more like symphonic music with a touch of metal rather than metal with a touch of symphonic. Nothing wrong with that of course. I guess personal preference sees me always waiting for a guitar solo or a punchy riff and most often I got a flute or a violin. But, I don’t mean to detract from the album with my petty complaints though. I think it is a superb album. The talent on show is jaw dropping. The song structures are mostly exciting, creative and show real composers in the traditional sense in Therion.

Love or hate (surely no one?) Therion, or just symphonic metal, you cannot deny the talent and quality on show. For me, I like it a lot and I think it will get plenty of playtime this year. If nothing else, I have just another reason to herald Therion as up there with the most talented of us.

Grab your pre order of Leviathan now from Nuclear Blast by following the link.

6.14/10 (11 votes)
Liked it? Take a second to support Brendan 'Unholydarklotus' Fisher on Patreon!