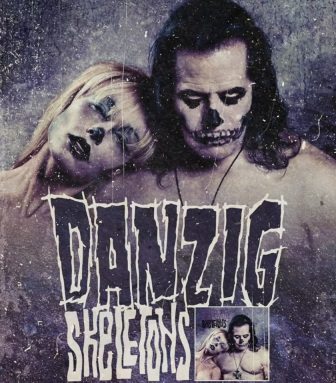 Skeletons is a covers album of songs that helped influence Glenn Danzig into being the unique performer & singer that he is today. Love him or hate him, he has one of the more unique voices in punk rock. His time in The Misfits is arguably some of their best work & while his Danzig stuff has been hit & miss over last few albums; his earlier work is incredibly enjoyable to listen too.

The opening song, Devil’s Angels (originally by Davie Allan & The Arrows) sets the bar for the album as a whole. Raw & moody, it sounds like early Misfits with elements of Samhain thrown in. If that’s your jam then this album might be what you’ve been waiting for.

There is a home-recording feel to the album that works mostly but some of the slower tracks, Satan (From Satan’s Sadist) & Crying in the Rain rely heavily on vocals that become quite drawn out. It’s difficult to pick out instruments during these songs too.

Some of these covers are really good such as Black Sabbath’s N.I.B. & ZZ Top’s Rough Boy. Easily the standout tracks on the entire album. Others don’t work quite as well. Danzig tries to summon his inner Elvis for a cover of Let Yourself Go & I found it irritating to my ears. A brief fast-paced guitar solo midway seems so out of place too.

I do like what Danzig did to Aerosmith’s Lord of the Thighs, the chuggy riff that accompanies the occasional squeal of a guitar sounds great & Danzig’s vocals don’t dominate quite as much.

It’s a decent album of covers, not exactly setting the world on fire but clearly a labour of love for the man & I’d much rather see him enjoying himself then releasing phoned in album after album.