Poison, Drowning, Claw, Or Knife. So Many Ways To Take A Life.

Trick ‘r Treat is undoubtedly one of the most Halloween themed movies ever made. It’s story is split into different smaller tales, which are impossible to write spoiler free so bare that in mind before reading this 🙂

Emma (Leslie Bibb) and her holiday-obsessed husband, Henry (Tahmoh Penikett) have set up numerous ghost-scarecrows for Halloween in their yard. After returning home from a Halloween party, Emma tries to blow out a jack-o’-lantern, but Henry tells her not to because it is against tradition to extinguish a jack-o’-lantern on Halloween; she blows it out anyway. While Henry is inside waiting for Emma to take down the decorations, she is murdered by an unknown assailant with a large blade-shaped pumpkin lollipop. Later, Henry goes outside and finds Emma’s severed head, with the giant lollipop in its mouth, hung up on one of the ghost-scarecrows, her limbs chopped off and hung like decorations. 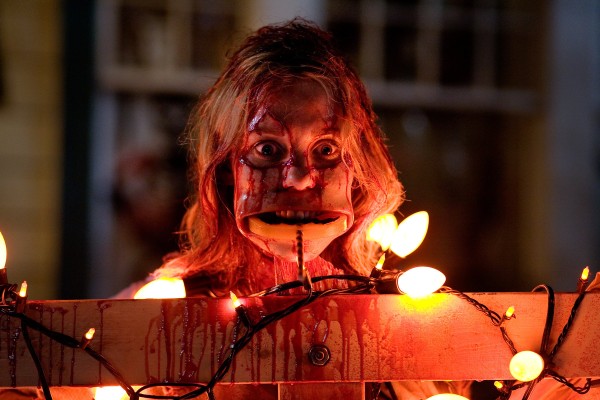 Steven Wilkins (Dylan Baker), the town principal, spots his young neighbor Charlie (Brett Kelly) stealing candy from his yard. Smiling, he places him down at his front door and talks to him about candy and stealing, carving out a jack-o-lantern, and he gives him a candy. Charlie eats the candy, which turns out to be poisoned with cyanide, and throws up large amounts of chocolate and blood before he dies. Wilkins buries Charlie in his backyard, along with another unknown body, and has a run-in with his neighbor, Mr. Kreeg (Brian Cox), and his dog. After finishing the burial, Wilkins sees Kreeg screaming from his window, begging for help; Wilkins disregards this and Kreeg is knocked down by an unknown assailant. Later, Wilkins arrives in his basement, where he helps his son Billy carve a “jack-o’-lantern” in their basement, which is revealed to be Charlie’s severed head. The sequence ends with Billy saying, “But don’t forget to help me with the eyes.”

Five kids, Macy (Britt McKillip), Schrader, Sara, Chip, and Rhonda, a savant, journey to the local rock quarry where Macy tells them the local urban legend of “The Halloween School Bus Massacre”. Thirty years ago in 1977, a school bus containing eight children, all mentally ill to the point of being chained to their seats, crashed into the lake at the bottom of the quarry; the bus driver was the only one who survived. Macy reveals that the children’s parents paid the bus driver to kill them to end the embarrassment of their “burden”. As for the bus, some people say it sank so deep in the lake, it could not be found. Others say the town did not want the bus to be found.

The group plays a prank on Rhonda in which they pretend to be the undead children and chase Rhonda until she trips and knocks herself out. Macy kicks a jack-o-lantern into the lake, whereafter the school bus children suddenly rise from the water. The undead children chase the group, and manage to grab hold of the chains which Sara is wearing as part of her costume, dragging her away to be killed. Meanwhile, Rhonda has locked herself in the elevator leading out of the quarry. Despite the others begging her to open it, she ignores them and rides it up herself as the School Bus children corner them. As Rhonda steps out of the elevator, the other kids are heard being dismembered and eaten alive.

Laurie (Anna Paquin), a self-conscious 22-year-old virgin, is getting ready for a party with her older sister Danielle (Lauren Lee Smith) and their two friends Maria (Rochelle Aytes) and Janet (Moneca Delain). Annoyed by their talk about boys, she stays behind and plans to join them later. The other girls find local men to bring along with them. Later, alone on her way to the party, Laurie is attacked by a vampire dressed in black. Meanwhile, Danielle, Maria, and Janet party at a bonfire with the men they brought, with Danielle worried about Laurie. The vampire’s body suddenly drops from a tree onto the party and Laurie appears. The “vampire” is revealed to be Principal Wilkins in disguise wearing fake fangs. The girls at the party, along with Laurie, suddenly transform into werewolves, removing their skin. It is revealed that Laurie’s “virginity” actually signifies that she has never killed anyone before. The girls then proceed to devour their dates along with Wilkins.

Kreeg, a Halloween-hating man, lives alone with his dog, Spite, as his only companion. Kreeg shows his disgust for Halloween by scaring away trick-or-treaters. While at his house, Kreeg is attacked by Sam (Quinn Lord). During the struggle, Kreeg rips off the sack over Sam’s head to reveal his head to be a cross between a jack-o-lantern and a human skull. Kreeg runs to his window calling for Mr. Wilkins to help him, but is tackled by Sam. Kreeg gains the upper hand when he manages to fire his shotgun at Sam, seemingly killing it, in the process shooting off one of Sam’s hands. As Kreeg dials 9-1-1, Sam re-attaches his hand and rises. Sam then attacks him again, stabbing at him with a large pumpkin sucker out of which he has taken a bite, rendering it sharp. Sam finds that the sucker has lodged itself into a piece of chocolate from which Kreeg had earlier taken a bite. Sam takes the sucker wedged into the chocolate and, having been given a treat, walks away. Meanwhile, pictures burning slowly in a nearby fireplace show a class photo of the masked children from the “School Bus Massacre” and the bus driver, who is revealed to be Kreeg. 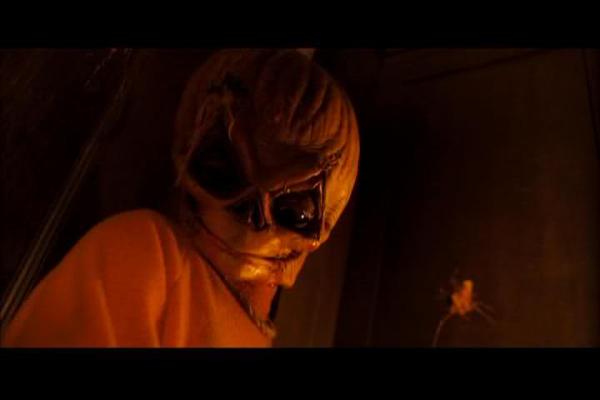 Bandaged and bruised from his encounter with Sam, Kreeg answers his door to give candy to trick-or-treaters. While on his porch, he spots Sam walk over to Emma and Henry’s house just after she blows out the jack-o’-lantern. Rhonda walks across the street in a trance and is almost hit by the laughing, human-form werewolf girls in their vehicle, on their way back from the surprise party. Young Billy Wilkins is sitting on his porch handing out candy and wearing a “Principal Wilkins” costume. Kreeg then walks back inside when there is another knock at the door. He opens the door to find the kids from the School Bus Massacre standing there with their bags outstretched, saying, “Trick ‘r Treat”. The ending is rendered as comic book pages showing the bus driver’s fate at the hands of the undead children.

If you’re looking for a movie to watch on Halloween then look no further. Not only is this film the most Halloween themed film, it neatly apportions scary and campy elements while cleverly interlacing four storylines. Trick ‘r Treat deserves more recognition because it creates a new movie villain that sticks in your head, one that – if it was more watched – has the potential to be a classic. It has great acting, and interesting twists that you don’t anticipate. I’m sure everyone is divided when it comes to which story is their favourite, and honestly is really difficult to choose. Each smaller story has it’s own favourable sections, but for me my personal favourite (because of everyone’s expectations and my judgement on the characters when I was watching it) is the Surprise Party with Laurie (Anna Paquin or Rogue from X-men) and her “friends”. It has a pretty obvious conclusion when you think about it, but when you watch it you can’t help but see Laurie as the victim and think her friends are just typical mean, irresponsible girls. I really enjoyed the outcome and it surprised me. I haven’t rated it higher since although all the stories may be great, the characters are lacking and there’s not really any backstory to each of them. Of course that’s unrealistic because a backstory probably wouldn’t fit into the layout of the movie, but it’s hard to care too much about each character when you know very little about them.