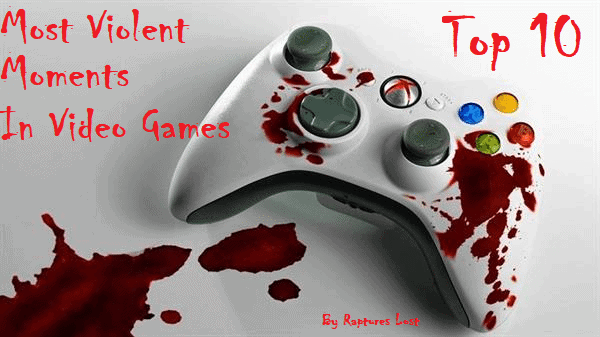 Violence in video games, I love it and so do you. Where would the medium be today if it wasn’t for hardcore, unapologetic, blood-soaked, chainsaw wielding, up close and personal savagery? I don’t know the answer and I don’t want to know. Sure, mindless brutality can get old when you’re more than a little desensitized. However, every now and then there are certain moments that still get you. The kind of ferocity that makes you sit back and say “damn, that had to hurt!” Then there are certain scenes that are so realistic, it makes you wonder how it came to be in the first place. Here are my 10 most violent moments in video games.

Instant, violent death attacks are a common occurrence throughout the Resident Evil series. However, none are more memorable than or arguably as violent as one involving a chainsaw wielding maniac.

Chainsaw Ganado behave like any other Ganado, attempting to directly confront the player and strike with their weapon. What makes them so much more dangerous than their lesser brethren is that they have much more health than regular enemies and do not flinch from single Handgun bullets. They walk slightly faster than regular enemies, and their only attack instantly kills the player. If you’re sloppy enough to allow this enemy to get close enough then enjoy witnessing a graphic decapitation.

There are few things more satisfying than nailing an enemy with a headshot from long distance. There are fewer still than seeing that bullet accelerate in slow motion as it penetrates their skull. This is a feature and a major selling point for the Sniper Elite franchise. The reason these are so violent is because the developers have gone to great length to depict human anatomy realistically. You’ll see exploding eyeballs, shattered skulls, smashed teeth, even testicles are not safe from your sniping skills.

This has to be up there as one of the most anxiety inducing moments in video game history. During the sequence, Isaac will panic and move his eye around VERY erratically should his heart rate become too high. His expression likely reflects your own as you edge the needle slowly towards his pupil.

If the player did not successfully line up the laser to Isaac’s pupil or allowed his heart rate to become too high, the machine will suddenly malfunction. The entire needle apparatus is suddenly thrusted downward and impales Isaac through his eye as he screams in pain. The needle attempts to retract, but ends up drilling in further, eventually piercing into Isaac’s brain and causing his death.

The Dead Space franchise is packed full of gruesome, gory death sequences. However, none are more memorable than this one.

I say myth as it has never really been confirmed one way or another just what Pyramid Head is doing to those poor mannequins. Some believe that it is implied and others think some other form of violence is taking place. However, sex is a major theme of Silent Hill 2. This alone has led many to believe that Pyramid Head is indeed sexually assaulting the mannequins in a very violent way. Whether it is true or not this is something that is generally accepted amongst gamers. Therefore, if it is almost universally accepted that it is rape then it should probably be treated as such. It’s a controversial topic but one that is shocking to witness and worthy of a place on this list.

These are both great games, this is something critics and fans alike agree upon. However, it wasn’t the beautiful visuals, story or gameplay that got everyone talking. It was that throughout the game Lara could die in a variety of creative yet gruesome deaths. Apparently, this was added to game so players could feel the weight of their and Lara’s failure. Whatever the reason, it doesn’t change the fact that this was quite shocking to see. It was the icing on the cake for what was a much grittier reboot of the franchise.

Anyone that has played and experienced the breathlessness of the combat in The Last of Us will understand why it has made the list. On the whole, the game is right up there as one of the most violent video games ever. Nothing else comes close on this list in terms of pure realism. Joel isn’t a superhero and the way in which he fights to survive reflects this. Every single combat encounter will leave you with the feeling like it could have gone either way. It never shy’s away from the constant brutality that this amazing game serves up at every turn.

The worst thing about John Marston’s death was that as a player, you knew it was coming. John was living on the edge and it was only a matter of time. However, nobody could have prepared anyone for the cruelty or the intensity of his murder.

He is mowed down by bullet after bullet, as his clothes become drenched with his blood. He falls onto his knees, spitting out blood, taking several winded gasps of breath, staring at the remaining Army members and bureau men. John falls onto his back and takes his last breath.

In the game’s fourth mission, “No Russian”, the player controls an undercover CIA operative, who participates in a mass shooting at a Moscow airport to gain the trust of a Russian terrorist group. It begins with the player exiting from an elevator with four other gunmen, who proceed to open fire on a large group of civilians at a security checkpoint. The player then accompanies the gunmen as they assault the airport, killing any civilians. The level is very graphic, as screams can be heard throughout, and the injured crawl away leaving blood trails. However, the player is never forced to partake in the massacre, and may instead let their comrades kill the civilians.

Trust what is known as one of the most violent franchises in the history of gaming to deliver a moment like this one. You can’t talk about GTA without mentioning the word controversial, it completely embraces that label.

In a mission called “By the Book” Trevor Phillips, one of GTA 5’s three playable characters, tortures a man suspected by government agencies of harbouring secrets about terrorists. Players must choose between various instruments of torture and press buttons and rotate sticks when prompted in order to use them on the suspect. If the suspect’s heart stops, it can be restarted so the questioning can continue.

While this is obviously graphic, it was for other reasons that people were so upset about the mission. The reason was that ultimately it was basically pointless and never mentioned again. It was simply seen as a torture simulator in which you could water board, electrocute and extract the teeth of someone. Was this necessary? That’s up for you to decide.

Spec Ops is an extremely underrated game. Not only is it really well written but it contains one of the most controversial, hard-hitting moments in video game history.

In the mission, you’re at the top of a building looking down into an enclosed location where an army of enemies is about to be ambushed by one of the worst weapons on this planet. However, Innocent civilians, the very people you were trying to save, are caught in the attack. The cutscene that follows shows the full extent of the carnage: charred corpses everywhere and the distressing image of a dead mother hugging her child, both burnt alive. It’s an important moment in the narrative and one that is very powerful to witness. It is an example of the real life violence that human beings are capable of.

What other moments come to mind when you think of the most violent moments in Video Game history?