Considered a high point of the found footage sub-genre, Paranormal Activity is the epitome of how horror goes now. Take a good idea then run it into the ground with yearly sequels that get worse and worse. I mean have you seen The Marked Ones or Ghost Dimension? Compared to those two the first one is Oscar winning stuff.

On it’s own though…damn, is it boring.

So the movie is played out as a set of recovered tapes following a serious incident at a couples home…that the police & the families then handed over to a movie studio. Ok, this stuff really annoys me. You can’t have it both ways…you can’t ask the audience to believe the movie is real then do something extremely unrealistic in the first few seconds.

It’s the whole argument in found footage about why person X continues to film person Y when all manner of crazy shit is going on. Sure it’s just a movie except that the film constantly tries to tell you that it’s not.

Anyway, we have Micah & Katie. A happy couple who have been experiencing some strange things going on in their home. Micah has gone out & bought a snazzy new camera in hope to capture any potential paranormal activity. Katie is less enthusiastic about it but goes along with his plan.

Get used to Micah nattering away at Katie as he films her constantly even when she asks him not too. I’d say he was a bit of a dick but he is such an average actor it just comes across annoying more than anything else. 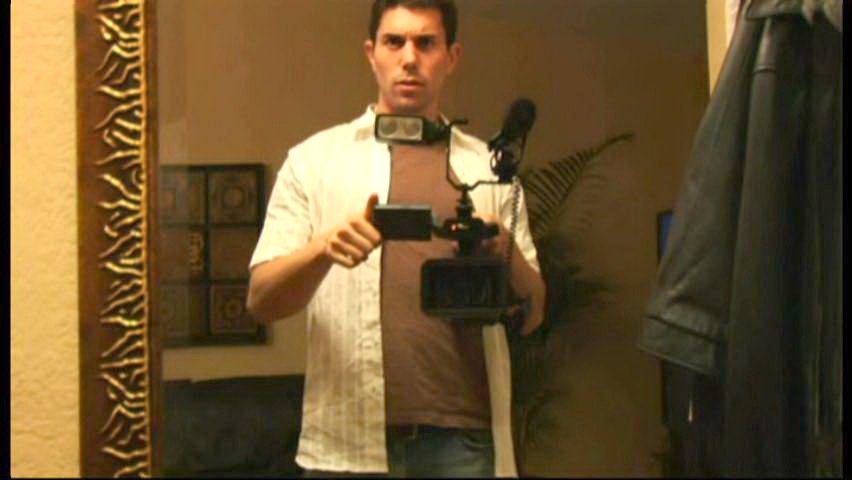 Katie is an improvement but not by much & I found their cute couple stuff to be awkward and unconvincing but that doesn’t really matter as we’re all here for the same thing! Ghosts!

Well, kind of…Paranormal Activity is a slow-burn movie that builds towards a frantic final 5 minutes. Starting out with subtle things like a door moving ever so slightly before people are being dragged out of beds & down hallways. The movie does create an atmosphere during the fixed camera moments in the bedroom & at times it can be quite chilling. 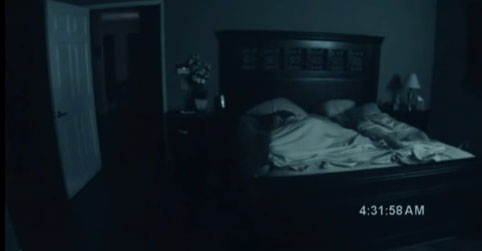 One particular well done scene sees Katie getting out of bed, seemingly sleep-walking. She stands over the bed looking at Micah as the timer in the corner speeds up. She stays in the same spot for a couple of hours…it’s an effective scare.

Unfortunately the problems with Paranormal Activity become evident every time one of these scenes end. Micah & Katie have little chemistry & it’s boring a lot of the time. It’s not character building as neither has anything of interest to say!

Later in the movie things begin to take a semi-interesting route as Katie begins to reveal that this stuff had happened to her as a child but it’s never built upon. A burnt picture in the attic of Katie as a child is dismissed far too easily as details are glossed over. Why? For the freakin’ sequels!

It makes the film feel incomplete and the lacklustre sequels really harm some of the originality shown here.

Still there are positives here. It’s not a jump scare-laden mess (except for the final few minutes) and the ones that do occur have reason and context. The early motivation for capturing everything on film makes sense & Micah treats it like a new toy. The brooding rumbling sound that plays as we build towards a ghostly bit of behaviour is very effective too.

As found-footage movies go it’s not too hard to watch either, sure there are plenty of dark, shaky & awful angle moments but this far from the worst.

I mean, shit, if that isn’t a compliment I don’t know what is. Paranormal Activity…not the worst found footage horror out there. They should quote me on the box art.

It hasn’t aged well & the sub-genre has been run into the ground but Paranormal Activity still has things that are enjoyable. The subtle creep factor & bigger moments work well while the oppressive sound effect that builds towards a moment is chilling. Some pretty bad acting, many boring moments and lack of a decent resolution ensures this will not go down in history as a high point of horror…no matter how many times you play night vision clips of screaming audience members.