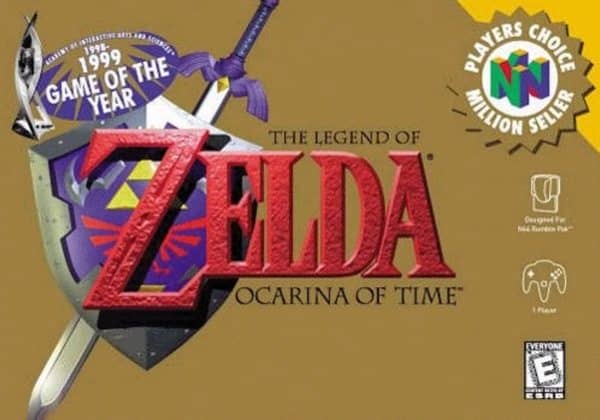 Like Shenmue this was a review I was both really looking forward too & dreading. Like Shenmue I hold this game in high regard & the thought of writing a review that might not do it justice felt wrong. Like Shenmue here I am writing it…

I consider Ocarina of Time the greatest game ever made. Over the years I have had games that are brilliant & that blow my mind. They fit into my top 10 often knocking out another great game but not OOT; it remains constantly at the top. It is a timeless classic & I hope generations of gamers will all get to experience it once in their lives. If you have not played it, get it & play it.

The important thing to remember about OOT is that it is not a sequel in the traditional sense but more of a restart. There have been many Zelda games before OOT but this was the first time the series moved into 3-D. The result was quite impressive & (other then Super Mario 64) it was the reason to own a N64. 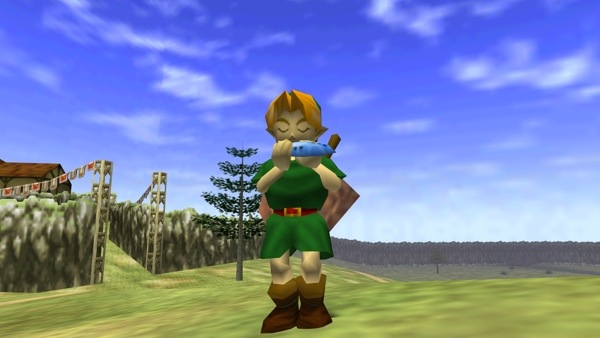 Set in the land of Hyrule, Link, a young boy, is having a bad dream; he is woken by it & greeted by the fairy Navi. Navi has been tasked with bringing Link to the leader of the forest Link lives in, the great Deku tree. The great Deku tree is dying & sends Link on a quest to save the princess Zelda from a great evil. This evil threatens to engulf all of Hyrule & will see Link exploring mountains, lakes, dungeons & even travelling through time in his quest to save the land & the princess. 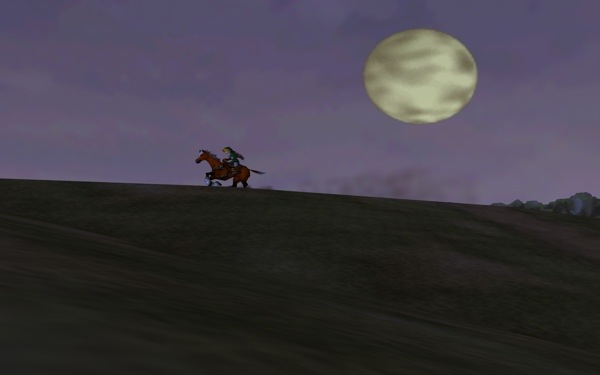 Ocarina of Time is a adventure game with dungeon crawling elements which means to progress the game, gain new weapons & upgrades to health you have to inevitable play through a dungeon finding keys & the like to open more doors ending in a boss battle. Items found in dungeons will allow progression to the other areas of the game, for example finding the slingshot allows to access rooms that have a switch high above. Later on different outfits will have different effects, the blue ones allowing Link to dive deeper in water. 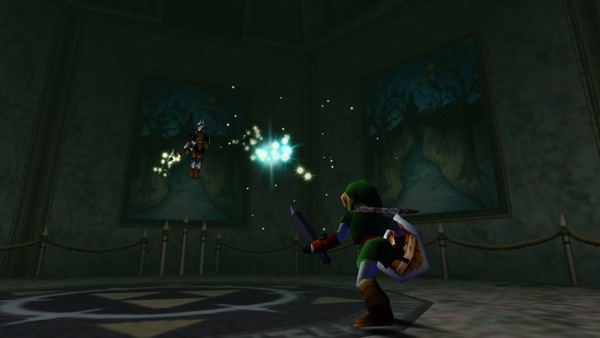 At first OOT is not that impressive, the opening area looking a bit drab & the first dungeon (inside the Deku tree) a bit basic. This was the point, once you are free to leave the Kokiri forest the games scale becomes evident. The first time I walked out into Hyrule field my mouth dropped open. It seems huge; in the distance I could see a large castle, to the right a mountain & an enormous lake to the south. All of these areas looked like backgrounds but all of them can be explored eventually. 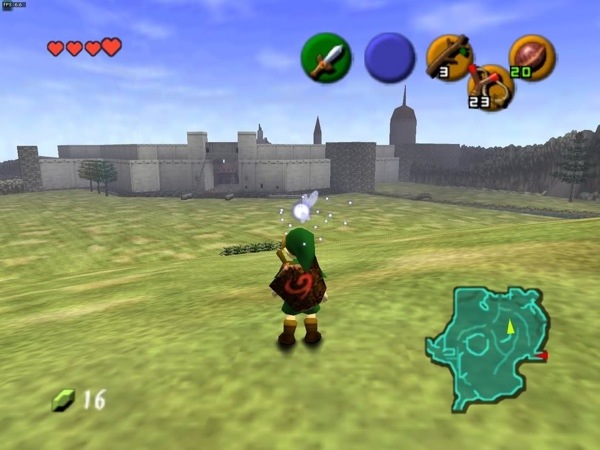 The game is huge even before you travel through time. Let me explain…later in the game you will have the need to travel years into the future turning Link from a boy into a young adult. In his time away Hyrule fell to the evil (Gannondorf) & these effects can be felt across the land. Check out the castle to see one example of what happened while you were gone!

The characters you meet throughout the game all have their unique charms, the Kokiri being children, the Gorons being wise & the Zoras being mysterious. Links interactions with them offer unique & often heart-warming stories. The princess Zelda has an air of authority that makes being around her very different to all others & Ganondorf is one of the best enemies in gaming. He is nasty & he doesn’t care who knows it… 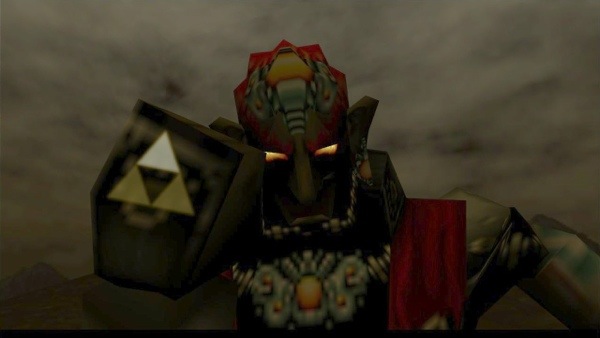 Only a game of this calibre could make interaction with a horse feel so personal. 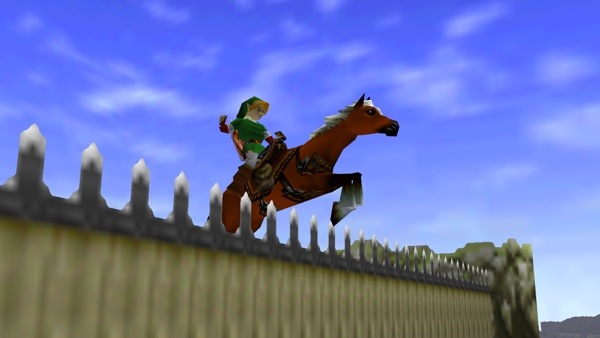 As well as the main quest there a number of things to do throughout the land most of which is collecting extra things to help you with your quest. Heart pieces are the most common (collect 4 for 1 extra heart) but you can also get extra bottles to carry stuff in as well as much more. Most of these extra things don’t have to be done but the benefit will be felt later on in the game.

The one major collectible that most will leave are the golden skulltulas. These are spider like creatures that are found hidden away & at night. As you kill them & collect their tokens you will be able to turn them in for rewards. Collecting all 100 is a big ask but it extends the life of the game hugely. 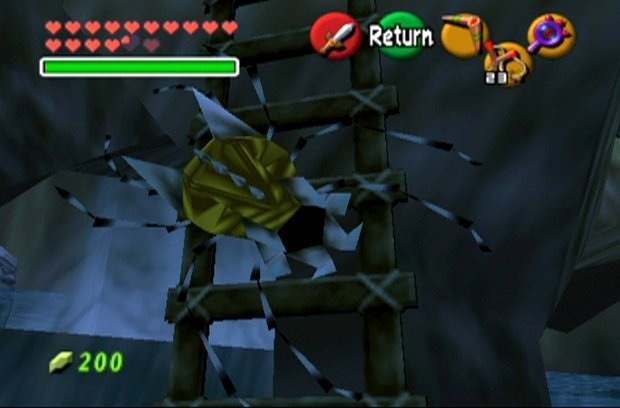 The N64 controller was not exactly the best controller anyway & OOT suffers from the same issues most games do. However the game seems to be designed around it particularly when it comes to selecting weapons & items. They can be mapped to certain buttons meaning one press will equip what you need. Sometimes the camera can swing wildly about when too close to walls but on the whole it’s smart & controllable.

One of the standout things about Ocarina of Time is the stunning music, possible some of the most memorable stuff you may ever hear in gaming. The main themes are one thing but the different area music is something else. It’s all so unique & will stick with you for a long time.

There are few games in the world that will offer so much satisfaction come the end. There are few negatives about it, let me think….

Ok the world can at times feel a bit empty, for such a large area there often is a lack of NPC’s.

To be honest its highly unlikely if you’re reading this that you have never played Ocarina of Time. I mean any self-respecting gamer will have so I can’t imagine my review here will have told you anything you didn’t already know. 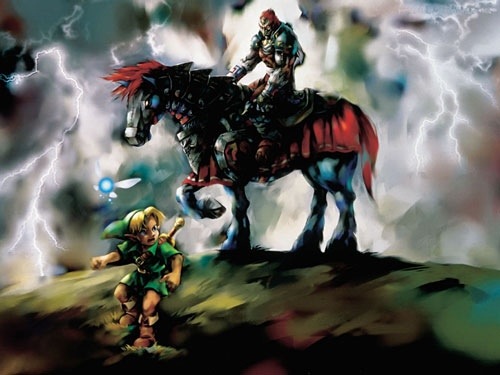 The Legend of Zelda: Ocarina of Time

0 thoughts on “Game Review: The Legend of Zelda: Ocarina of Time (N64)”