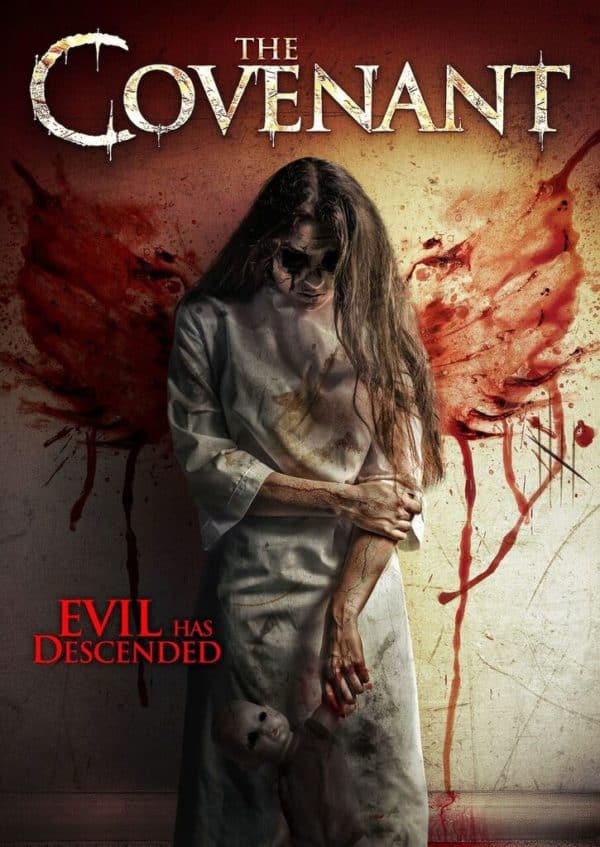 After the tragic deaths of her husband and daughter, Sarah Doyle moves back to her childhood home with her estranged brother, Richard. It’s not long before Sarah begins to experience supernatural phenomena of a violent and hostile nature. Bewildered and desperate, Richard enlists the aid of a paranormal investigator and a priest who confirms that Sarah has become possessed by a powerful demon. Together, the three men will go to battle to save Sarah’s soul.

Directed by Robert Conway (Krampus Unleashed), and starring Monica Engesser (Krampus the Reckoning), Clint James (The Encounter), Owen Conway (Exit to Hell), Sanford Gibbons (Tombstone), and Maria Olson (I Spit On Your Grave : Deja-Vu), The Covenant will be released on demand on February 7th and is brought to you by Uncork’d Entertainment.

Having just finished watching The Exorcist television series (read our review here) I may be a little over saturated with possession but let’s see. I am actually quite happy to see a possession movie with, presumably, a lower budget though. I am hoping for a little less CGI and a little more old school make up for a start.

To the story, which starts off with 5 minutes of misery, just to make sure you sit up and take notice. So we start at the funeral of a little child, a young girl. We learn later that this poor girl, Elizabeth (Amelia Haberman), was terminally ill, suffering from Leukaemia. She died when she fell asleep  in the bath tub and drowned, though there is a little bit more to why she was so sleepy in that scenario in the first place. Elizabeth’s father, Adam (Chris Mascarelli) takes it very badly to the point of taking his own life. Just before he blows his face off, he finds the time to point the finger of blame at his wife and Elizabeth’s mother, Sarah (Monica Engesser).

With that suspicion now firmly planted in my mind, the film jumps forward in time by a couple years. Sarah, who has obviously struggled to adapt to life after the passing of her daughter and her husband in such terrible circumstances, is with her brother, Richard (Owen Conway) who has brought Sarah back to their childhood family home. Richard, who is a recovering alcoholic, believes that a move away from the location of the horrors of the past years back to the family home, may give Sarah that bit of normalcy she needs to start putting her life back together. The house is dilapidated, has no phone signal and no internet and despite hints of the brother and sister being quite estranged for the last 10 years, things do start to mend, at least with their relationship. As you would expect their short moment of peace soon breaks. Sarah starts having day dreams and visions of here daughter as well as hearing her speaking though initially it appears to be mainly grief driven and not necessarily driven by anything supernatural. Richard, who has gone to the nearest town starts running in to all manner of questionable people who all throw warnings at him. Those warnings, which I expected to be “get out of the house” were actually “get as far away from your sister as possible”. He hears it from Molly who is quickly dismissed as the town weirdo and he also hears it from a well dressed man in the grocery store. That man appears regularly, acting almost like a harbinger of doom, and seems to know the brother and sister and the story of the girls death and pretty much accuses Sarah of being the reason for her child’s death.

There is a nice little feeling of building tension happening in the film about now as you try to piece things together, and things keep adding to that at a nice steady pace. A few minor events happen in the house such as strange smells, power and water supply issues and the like. Sarah hears a voice in the cellar, a lightbulb explodes and the door slams shut and locks her in but all these things are dismissed as the quirks of living in such a run down house, in need of vast repairs. The weirdness and horror move away from subtle for a moment though and things starts stepping up when a couple neighbors drop round to see Sarah and while they sit around talking, her crucifix heats up and burns neatly into her flesh. As you would imagine, they exit rapidly. We also start to notice, as does Sarah, strange cuts and scars appearing on her torso.

Sarah continues to worsen, seeing her daughter more and more vividly and having more wounds and scars appear and as Richard teeters on the edge of his own tether, he finds Sarah carving her arm up with a huge knife to send him hurtling over that very same edge. He forces Sarah to go the hospital and while Richard is freaking out, he runs into a priest they knew from when they were kids, who offers to pop round to the house to see them, he eagerly accepts the offer, much to Sarah’s annoyance. That priest, Father Burk (Sanford Gibbons) makes little headway talking to Sarah so offers to pray over her at which point a demonic face appears on the wall and he runs for the hills too. These townsfolk are not the sticking around type so far. Father Burk does offer one final bit of advice as he scarpers – contact Father Francis, he says, he will help with the exorcism. A statement that throws Richard completely as he still sees Sarah as suffering from some form of PTSD and not in need of an exorcism. The final act of this tense film sees everything reach boiling point. Richard resorts to drink, Sarah is full on demonically possessed and with the arrival of Father Francis (Clint James) arrives Richard’s last hope but is it already too late?

One thing is for certain, the ending is unexpected and clever and most definitely not a happy one.

The Covenant is an cracking horror movie. There are great acting performances, from Owen Conway and Monica Engesser in particular, that make their relationship feel believable in its flaws. The film excels though in its use of good story telling, great pacing and subtle horror to build up tension before the big finale. The make up effects look brilliant and while it may not have the sheen and shine of a big Hollywood blockbuster, it is better for it. The writers, Richard and Own Conway, have done a great job of keeping the viewer guessing and the ending will come as a surprise to most which is very refreshing in how unpredictable it is.

A very good, creepy horror that is paced perfectly. Jump scares and volume jumps are completely absent here and instead solid story telling and the clever use of subtlety is employed to keep the viewer guessing as to what is really going on. That coupled with some very good acting performances and great make up and effects makes for a really enjoyable watch.