Raw is a French horror film written and directed by Julia Ducournau, it released in 2016. It garnered a huge amount of recognition that year with almost all critics universally praising it across the board. Also, it’s worth noting that some viewers found it’s imagery so disturbing that they allegedly fainted and or vomited. That’s more than enough to peak my interest and raise my expectations. Does Raw live up to the hype?

Lifelong vegetarian Justine begins her first semester at veterinary school, the same one her older sister is currently attending and where her parents met. Her first night, she meets her gay roommate Adrien and is forced to partake in a hazing ritual, welcoming the new students. They are brought to a party, where Justine feels uncomfortable until she runs into her older sister Alexia. Alexia shows Justine old class photos of students bathed in blood, including one with their parents.

The next morning, the new class is splattered with blood during their class photo and then are lined up and forced to eat raw rabbit’s kidneys. Justine refuses, saying she is a vegetarian and even asking Alexia to back her up. However, Alexia denies she’s a vegetarian and after Justine watches Alexia eat a kidney, she reluctantly eats one as well.

Later that night, Justine discovers a strong, itchy rash all over her body. She goes to the doctor the next day, who diagnoses her with food poisoning and gives her a cream for the rash.

The next day, Justine begins having cravings for meat. However, no matter what she tries nothing can satisfy her. She finds the same cream in Alexia’s cabinet that the doctor gave Justine.

Alexia gives her a bikini wax, during which some of the wax gets stuck on Justine’s skin and Alexia proceeds to try to cut the wax off with sharp scissors. Justine kicks her away and Alexia accidentally cuts her own finger off and faints. Justine immediately calls an ambulance. As she waits, she is overwhelmed with her craving for meat, and eats the finger which Alexia sees when she wakes up. At the hospital she tries to throw it up but fails. The missing finger is blamed on Quicky, Alexia’s dog, who is put down.

The next morning, Alexia takes Justine to a deserted road, where she jumps in front of a car, which crashes into a tree. Alexia starts eating one of the passengers, as Justine tries to stop her. She walks back to school alone. Despite this, Justine’s craving for human meat grows…..

Will Justine be able to find help for relentless hunger? Or will she give in to her urges for human flesh, check out Raw to find out. While I did enjoy aspects of Raw, I must admit I struggle to see what all the fuss was about. The concept is undeniably strong, but I feel it was executed poorly. Raw is a weird movie but it’s that convoluted, contrived kind of weird. It seemed to me as if it was attempting to make some grand statement, but I just didn’t get it quite honestly. I’m being told that it’s this artistic masterpiece and I’m just not seeing it. 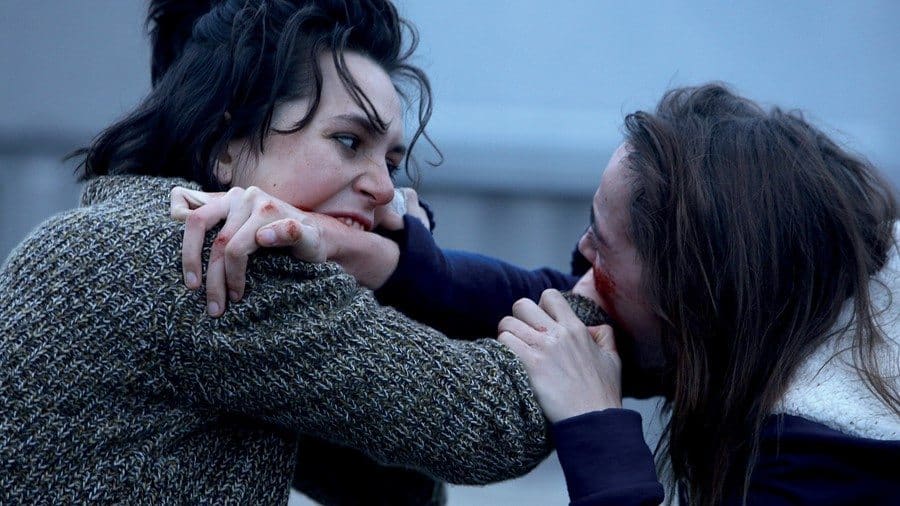 I have many reasons for feeling this way which I will delve deeper into now. Firstly, it’s very slow paced and packed full of boring, pointless scenes. If you enjoy watching university studies partying and being generally unlikeable and annoying, then you’ll like Raw. If you find someone staring blankly for long periods of time exciting, then check out Raw. I can think of several scenes that could be removed and it would do nothing to change the plot.

Secondly, it really annoyed me that Justine’s sister Alexia clearly understands fully what is happening, but she does nothing to help in any way. At no point does she explain a thing to Justine or try and guide her. I know she has her own issues and what not, but it just didn’t make any sense. Also, considering their parents are fully aware of what is happening they do nothing either. They just send their daughter off to university and what? Hope everything will be okay? It’s quite silly.

Another thing, why is it that eating the Rabbit liver is what “activated” Justine’s condition? Also, why did the parents allow Quicky to be put down when they knew the truth? I imagine they were protecting Justine but why not step in at that point?

Finally, I just didn’t understand Justine and her motivations. At times, Garance Marillier is fantastic but at others her reactions to certain events are laughable. Raw attempts to portray realism but it does a poor job.
Visually, I cannot deny that Raw succeeds. I will say that the gore and effects used look great. However, I was underwhelmed by the overall lack of gore throughout. I certainly have no idea why anyone would faint watching this. I was hoping for a blood-soaked finale, but it couldn’t even give me that.

Overall, Raw was a huge disappointment. I may have had my expectations a little too high, but I can’t be blamed for that. In all fairness, that isn’t necessarily Raw’s fault either. Still,  It isn’t a bad film but it’s no where near the masterpiece that many will have you believe.