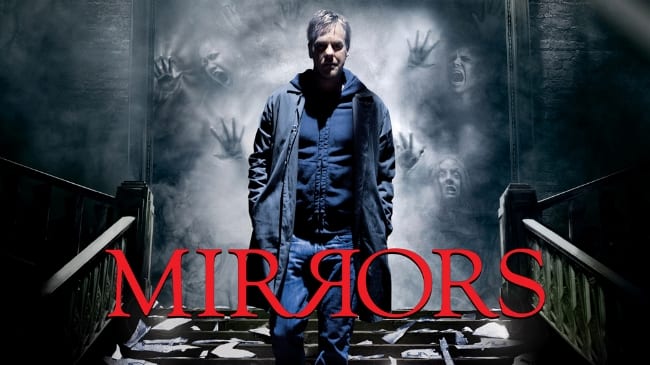 Mirrors is a 2008 remake/re-imagining of the classic K-horror, Into the Mirror directed by Alexandre Aja and starring Kiefer Sutherland.

He plays an alcoholic detective named Ben who is currently serving a suspension for his role in a shooting gone wrong. Estranged from this wife and kids, in an attempt to right his life and kick the drink he has taken on a temporary job as a night security guard. The location is the Mayflower department store that was pretty much destroyed by fire years before.

Before all of this though, Mirrors plays its supernatural hand really early. By actually opening with the previous night security guard dying at his mirrored version’s hands.

Back in the Mayflower with Ben, the fire absolutely gutted the building but left a lot of the mirrors intact it seems. Of course, on his first night there he begins to see strange things in the mirrors which of course he dismisses as hallucinations.

Ultimately these visions get more and more detailed to the point where it reveals pretty much everything supernatural to Ben within the first third of the movie. Seemingly desperate to get any ‘questions’ about what is real or not real out of the way, we’re then left with a mystery. As Ben sets about trying to find out just what the presence in the mirror wants.

Excuse the dismissive tone but Mirrors is a frustrating watch. On the one hand it is commendable that it doesn’t just rehash the movie it is based on. Instead taking some of its ideas and sticking them in amongst an original story. On the other hand, that original story is boring and overly familiar. Alcoholic cop discovers supernatural events connected a serious event in the past, begins to dig around and discovers not all is what it seems. We’ve seen this story done time and time before and in a shorter, more interesting way.

It’s just so boring and with a wealth of early supernatural scares, later ones have little or no impact even if the concept is sound. One in particular involving water and the reflection that comes from that is original but the slog to get to that point is not worth it.

It’s not the fault of the cast…mostly. Sutherland is a good actor; he’s been in many big movies and shows but here he fails to spark.

He has moments, often the ones not involving supernatural stuff but it’s just not enough for a memorable turn. Most of the other cast, the likes of Paula Patton and Jason Flemyng do exactly what is required of them. Nothing of note but nothing offensive either.

The best thing about Mirrors? Some of the effects. In a surprising turn, the movie has some really nasty gore scenes. One in particular involving a mouth being ripped open is genuinely shocking!

See this scene but don’t worry too much about seeing the rest of the movie.