Less of a horror anthology, Minutes Past Midnight is more of a collection of horror shorts curated by filmmaker Justin McConnell in collaboration with Rue Morgue Magazine. There is no over-arching narrative and nothing to link each short together.

That and the massive tonal shift between each short make for a pretty disjointed affair. Something that could be over-looked if it was packed with quality but unfortunately, it’s not.

It begins strongly enough with the tongue in cheek silliness of Never Tear Us Apart. Here, two men on a trip to visit family stumble across cannibal’s shack in the woods. It’s silly but pretty entertaining especially with its final moments. 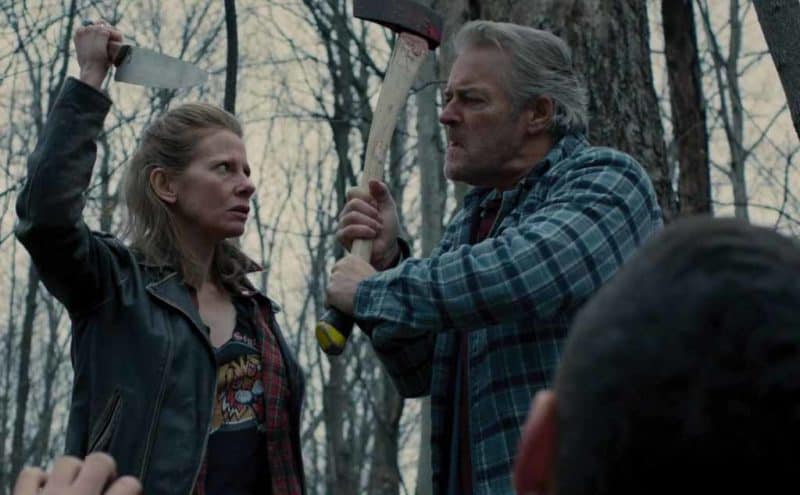 It’s followed by Awake, one of the worst shorts of the entire film. A young boy is suffering from some sort of illness that is affecting his mental health and his parents are really struggling to cope. The plot is solid enough and even initially intrigues but a lack of connection with the characters and the ‘is that it?’ finale leaves you feeling confused.

The tone shift between the first two is extreme but is nothing compared to what we get with Crazy for You. Arguably the best of the bunch. Here we meet a young serial killer who is driven to murder by polka dots. He hates what he does but he just can’t fight the compulsion until he meets the woman of his dreams.

Visually stunning, the excellent cinematography, the enthralling characters who are well-acted and a really clever storyline makes this a cut above every other short within Minutes Past Midnight.

The Mill at Calder’s End utilises doll animation to create an atmospheric Hammer Horror/Lovecraftian homage. A highly impressive effort that features the vocal talents of the legendary Barbara Steele.

After two great shorts in a row, things take a turn with Roid Rage. A lengthy mash up of pulp horror, 80’s action movies and gross out horror comedies like Basket Case. It is nowhere as good as it sounds thanks to bad CGI, poor acting and its overly long length.

Feeder fares better even though once again it is far too long. It sees a struggling musician move into a new apartment and discover some sort of shrine in a cupboard. While trying to work, the shape of a mouse is scratched out on the floor and he realises that it wants feeding. Doing so gives him inspiration to make music again so he continues to provide until its demands get bigger and bigger.

The gritty tone and dark plot lead to a payoff that is both satisfying and filled with despair.

The Spanish-language short, Timothy sees a young boy obsessed with a giant costumed rabbit from his favourite television show. Sent to bed by his mean baby sitter the boy is pleasantly surprised to see the arrival of the costumed rabbit arrive in the house.

Lacking originality, the best thing about Timothy is the contrast between horrifying scenes of brutality and colourful cartoonish-ness.

The final two shorts show off both the good and the bad things about Minutes Past Midnight. Ghost Train is a stylish horror with incredible production that builds tension before ending flatly.

While Horrific returns to the more comedic style showing the lengths a redneck will go to kill any critters that comes his way. It doesn’t take itself too seriously but it’s not the best way for the film to end.

Overall Minutes Past Midnight is an enjoyable collection of shorts that ranges from great to bad and everything in between.