I hate slamming a game. Even more so when it is the hard work of one individual. The person in question is developer Brian Wilson, of Wakefield Interactive, a one-man company. This is his first game and was successfully funded on Kickstarter. It’s as indie as you can possibly get.

I wanted to love Where the Bees Make Honey, I really did. It seemed like it would be the kind of game that was right up my street.

“A story about reflecting on different moments from a childhood, which is played and experienced from an adult perspective.”

Unfortunately, the end result is a confused mess of different gameplay styles, bugs, ugly visuals, lacklustre puzzles and bad controls. It’s also incredibly short – from beginning to end it can be completed in 45 minutes to an hour.

It begins promising enough as we’re put in the shoes of Sunny. She is a telemarketer working from a grey and lifeless office. She is doing overtime, so alone in the office and not getting anything but hang-ups when she tries to call customers. Through a monologue, it becomes clear that Sunny is very unhappy and it stems from her lifeless job.

When the phone rings, we get our first task. Her boss wants her to collect three items round the office, easily done played from the first-person perspective. After the items are collected, the power goes off and we have to lead Sunny down to the basement to turn the generator back on.

This is where the game really gets going on as once the lights are back on and Sunny heads back upstairs, she finds herself in a jungle. It’s colourful and vibrant, far removed from the cold office space. It’s unexpected and promising but short lived as a portal will transport Sunny to the next area. 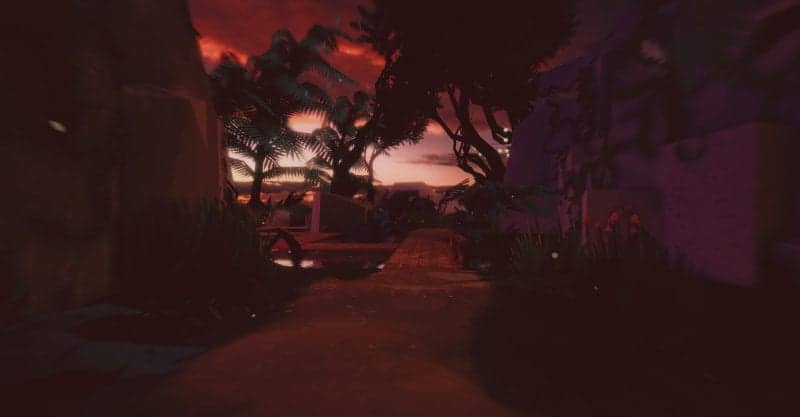 Here Sunny is now animated and the game is played from a 2.5 platformer perspective. Again, it’s a really short section that serves more as a tutorial then anything else. The first puzzle section comes next and has you navigate the animated Sunny past some obstacles by using the trigger buttons to rotate the screen and lower walls. It’s very basic stuff and while later sections are a little more complex, there is nothing that you would call ‘tricky’.

Levels are set around a certain event of Sunny’s childhood within the background of a certain season.

It’s all as random as it sounds. Short gameplay sections that tick plenty of boxes for variety but are all done poorly. Do one thing right, rather then several different things wrong.

So many of the issues with the gameplay relate to the controls. The rabbit section immediately comes to mind as the thing moves like a tank. It’s an absolute horror show to control, with an unresponsive camera and delayed jumping controls. It’s not such a problem until you hit the platforming section…be prepared for a serious amount of frustration here.

Then there is the RC part where the problem relates to tight turns and a vehicle that flips over all the time. There is no button to reset yourself so you’re left spinning your wheels until the game decides to teleport you out of your predicament. No problem there, right? Well, there is a pretty serious glitch here. One that will see the truck dropped from height on a respawn, only to flip over again and again…it’s downright infuriating.

You’ll be desperate to just get through the section just so you’re one step closer to the end of the game. It’s filled with issues like this, clipping in stages, falling through the floor, invisible walls everywhere…it’s painful.

Once we’ve made it through, we get one final moment with Sunny in the office as the phone rings as we’re given the option to answer the phone or ignore it. Make your choice and the game ends. Mercifully, it ends.

The lack of emotional impact is startling. Who is Sunny and why should we care about her? Her monologue as we play stages is background noise. You’ll be completely distracted by wrestling with bad controls most of the time. Even still there just isn’t enough depth to her memories. While there is a fantastical element to them, the ugly visuals and bad level design make them all feel so bland.

It’s just not a good game.

Where the Bees Make Honey