Avengers Academy is a free to play snore-fest that insults the licence it uses & brings its paywalls crashing down within a few hours of playing. Hell, within 10 minutes of playing the game was offering me a mission that involved buying one the premium packages available.

Nice…but more on that later. First the story, err…

In a clear rip off of the X-Men, Nick Fury has opened up an academy to welcome & train teenager versions of the marvel universe. You thought Tony Stark (Ironman) was obnoxious before? Well you’ve not seen anything yet!

Along the way you’ll unlock plenty more superheroes, take on the evil Hydra & do a whole lot of waiting because the latter is all you’ll mainly do in this ‘game’. The inverted commas are for a reason…I’ve played many a free to play game that seems to have forgotten to include any real gameplay but Avengers Academy might actually be the worst.

Timed missions, that you activate with a touch & then wait until the timer ends, collect your reward & then do the exact same thing again. In between you get some of the most obnoxious text box conversations to progress the paper-thin story. These are teen versions of Marvel’s superheroes so are obsessed with partying, taking selfies & dancing. You’ve not know pain until you’ve waited on a 2-hour timer for Loki to stop dancing or Iron Man to stop fiddling with tech.

Missions repeat constantly & the characters task list is limited until you reach higher levels. Completing mission’s gains gold & items that can be use to unlock new characters. It took me 3 days to unlock Falcon & what was my reward? More timed missions for him to enjoy.

If that wasn’t bad enough, if a character is occupying a building that only holds one & you want to send another character on a mission that involves that building, you’ll have to wait. 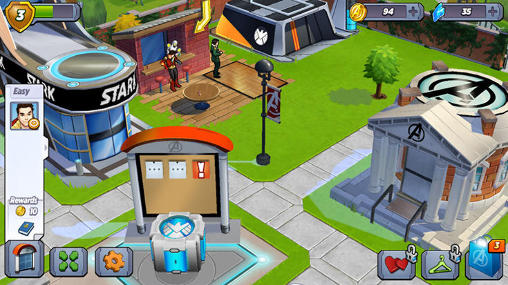 Most games that adopt this style allow you a certain amount of freedom for quite some time. They want you to progress quickly, hook you in & than slam the paywalls down on you…after you’ve come to believe you are progressing. Avengers Academy doesn’t give a damn about that & is practically begging for your cash after a short period.

Like I said above, within 10 minutes I was offered a mission (that still remains in my mission list at the top with no way to cancel it) to buy a box of credits & get $5 worth of shards additionally free. Shards are the premium currency & used to finish missions instantly or buy buildings/characters outright.

The standard prices are here… £1.49 will get you 100 shards while £79.99 will get you 7000 (the best deal according to the in-game text) with a range of insane pricing in between. So let’s do the usual & break this down. The Hulk is currently being offered to me as an early access character (lucky me!) & will cost 1,495 shards.

Oh yeah, make no mistake Avengers Academy is aimed at children so the constant pop-ups to ‘buy’ Vision or War Machine immediately with shards is disgraceful exploitative behaviour.

It’s a pity too because on the surface Avengers Academy is bright & colourful with a universe ripe for smart ideas relating to gaming. Sadly all we get though is one idea & it goes in the centre of the chart at every board meeting: a bit of money isn’t enough, we want all the money. 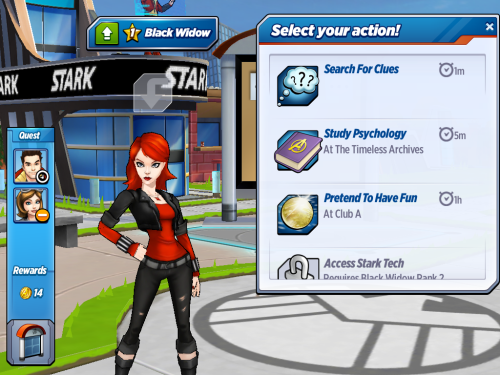 A travesty led by greed & disrespect towards the Marvel licence, they don’t care about gameplay so why should you care about downloading & playing their game? Avoid this trash & voice your disgust towards the companies involved as best you can.