It wasn’t too long ago that M. Night Shyamalan was considered to be one of the finest directors around but after a long string of poorly received movies it’s fair to say his stock has greatly fallen in recent times. This lack of success has led him to return to lower budget films in an attempt to regain creative control. The Visit (2015) is his most recent attempt and it comes in the form of found footage, a genre that is more often miss rather than hit. When Paranormal Activity released in 2007 found footage was all the rage but that was nearly 10 years ago, is Shyamalan too late to the party? Can he really bring anything fresh and new to this already exhausted, overdone genre?

Rebecca (Olivia DeJonge) and Tyler (Ed Oxenbould) prepare for a week-long stay with their grandparents, John and Doris, while their mother, Loretta Jamison (Kathryn Hahn), goes on a cruise with her new boyfriend. The two kids, who have never met their grandparents, intend to film a documentary about their visit. Loretta has not seen her parents in fifteen years due to having had a massive falling out with them. She tells Rebecca little about the disagreement she had with her parents, suggesting that Rebecca ask them for more details.

“Nana” and “Pop Pop” (Peter McRobbie and Deanna Dunagan) greet Rebecca and Tyler at the train station. Once they are settled in at the isolated farmhouse, Rebecca and Tyler are instructed to never go near the basement because it contains toxic mould. That night, John tells Rebecca and Tyler that as he and Doris are elderly; their bedtime is 9:30 p.m. An hour past curfew, Rebecca ventures downstairs for something to eat and discovers Doris projectile vomiting. Later, Rebecca mentions it to John, who dismisses it as Doris having the stomach flu. John then reminds her that she and Tyler must not leave their bedroom after 9:30 p.m.

Over the next few days, Rebecca and Tyler notice their grandparents exhibiting more strange behaviour. When Rebecca asks Doris about what happened the day Loretta left home, Doris begins shaking and screaming, until Rebecca calms her. John and Doris are later confronted by a woman who was helped by them in counselling; she goes into the house with them but is never seen leaving. Tyler, concerned about the occurrences, decides to secretly film what happens downstairs at night. Doris discovers the hidden camera, retrieves a large knife, and unsuccessfully tries to break into the children’s locked bedroom.

Are Rebecca and Tyler right to be suspicious of their grandparents? Or is everything that has happened something that can be explained rationally, watch The Visit to find out.

If I could describe The Visit in one word it would be smart, well at least the first two thirds of the film anyway. In a lot of ways the movie feels like a major parody of other found footage films, it feels as if it is aware of how overdone and cliché certain aspects of them are.

There is an excellent scene in which Rebecca and Tyler are fooling around in the claustrophobic crawlspace under the house. Suddenly Nana appears with her long hair draped over her face and races after Rebecca, it’s very unnerving. Rebecca escapes the crawlspace but Nana comes out laughing as if she was simply playing around with them and it makes you think as the viewer. Nana really could have simply been playing with them but it was shot in such a clever way that it seemed otherwise, it’s executed brilliantly.

In another instance, Rebecca catches Pop Pop cleaning his shotgun and for the briefest of seconds it looks like he had the thing in his mouth but did he? He claims he is merely cleaning the gun and it’s a perfectly rational explanation, you certainly feel the characters paranoia that something isn’t right.

Nana is extremely creepy, by day she is the sweetest of old lady’s but by night her hair gets lower and lower until she completely loses her mind. She runs around the house naked, slams doors, scratches at walls and screams but according to Pop Pop she’s just old and has some mental issues which could be the case. I’ve been afraid of old ladies in horror movies ever since I saw Henrietta in Evil Dead II at an inappropriate age but mentally ill or not, Nana is pretty scary at times.

One of the biggest issues with The Visit is the “big twist”. It seems obvious now that I know what it is although I won’t deny I didn’t see it coming, but I’m not sure why. It’s a well done, solid horror movie reveal but it changes the movie entirely into something I feel I’ve seen before many times. It completely loses what made it smart and throws it all away, I think it should have been done very differently but it is what it is. In my personal opinion, the big twist shouldn’t have come until the very end of the movie when the children had returned home.

The last act is enjoyable but as I said I feel it missed an opportunity to be something much more than it turned out to be. People will say that it’s a little unrealistic that a mother would send her two kids to spend a week with her parents when she hasn’t spoken with them in 15 years and they’d be right to say so.

This might be the type of movie that you can only enjoy the way it was meant to be enjoyed with the initial viewing. Once you know the reveal, well I’m not sure how well it would hold up the second time knowing what I know. 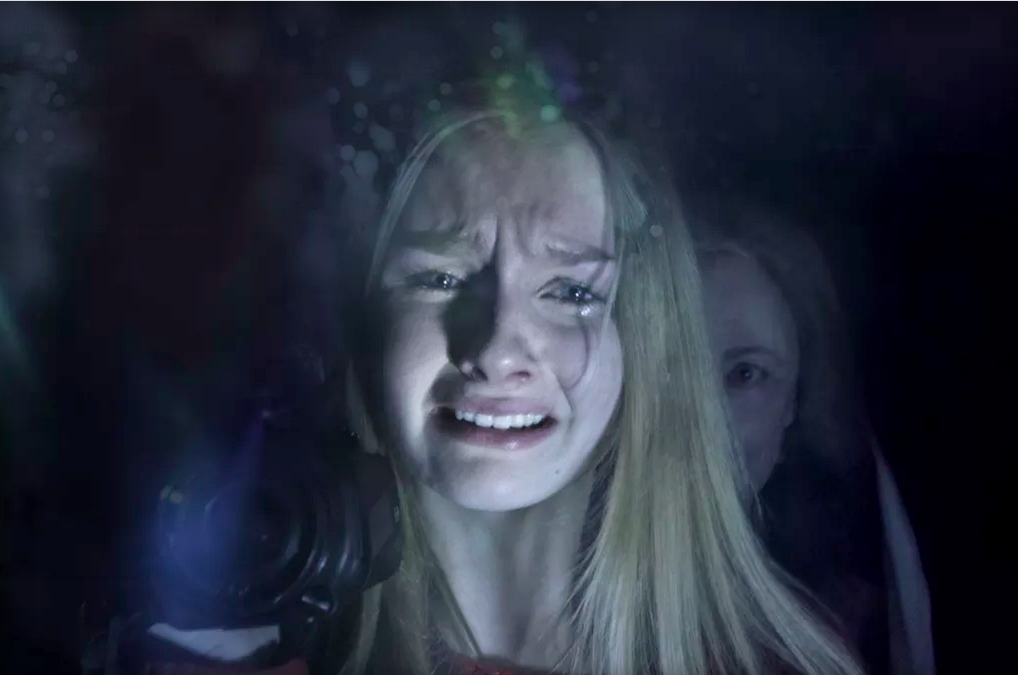 The Visit takes the found footage genre and breathes a smart, enjoyable breath of life into it.