Fallout Shelter is a free to play simulation game…something that normally sends shivers of dread down my spine. The rule with free to play sim games seems to be, offer little but ask for lots. In-app purchases are abundant & intrusive with gameplay eventually slowing to a crawl if you don’t spend some real money.

That in itself is often not the problem…I mean if a game is good it deserves a bit of cash however they rarely are. What tends to happen is the in-app purchases are so grossly over-priced that all you’ll feel is contempt for the game creators as they clearly try & trick children & dumb people in spending lots of money on speeding up timers or unlocking stuff that should already be in the game.

Firstly it is worth noting that Fallout Shelter will only run on most modern devices. Check what device you have before trying to play it as earlier devices will just see the game crash from the main menu.

You are the Overseer of your own vault starting from scratch. The aim is to build a working & safe vault whilst keeping your inhabitants happy. You start off with a small amount of dwellers that are rescued from the wasteland outside. You must assign them to rooms that generate several important resources…power, water & food. 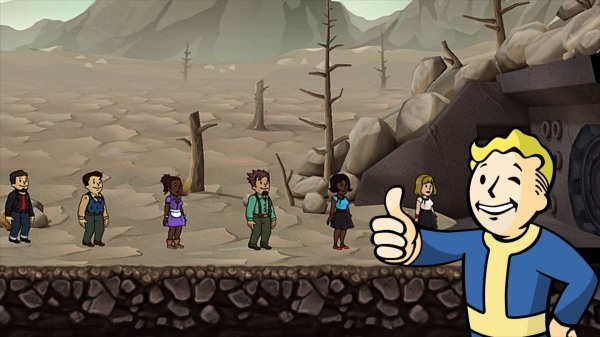 7 statistics determine which dweller will work better in which room. They are Strength, Perception, Endurance, Charisma, Intelligence, Agility, and Luck – SPECIAL. The higher the attribute, the higher chance for better results in each room. These stats can be increased by training as you build more rooms giving you more freedom to move dwellers around.

At first new dwellers will arrive from the Wasteland but eventually it will be up to you to pair dwellers together in the private quarters resulting in pregnancy & eventually a child. Once the child grows up (takes a little time) they are able to work & assist in the running of the vault. This process is very easy & the only limitation being how many people can be in the room at once…for example, I had one man stay in the quarters & make 5 different women pregnant in a row.

Rooms can be upgraded to increase productivity or in the case of the private quarters…make more room for more dwellers. More rooms are unlocked as more dwellers arrive with radio rooms (for trying to contact more survivors out in the wasteland) & labs for making health packs & rad-away packs.

These are necessary as you can send a dweller out into the wasteland to explore where they can find useful stuff for your vault such as new outfits, weapons & caps.

Building & upgrading rooms cost caps…the currency of Fallout & they are earned in several different ways. Exploration of the wasteland, completing objectives, levelling characters up, opening lunchboxes (more on that later), gathering resources which can also be rushed however that comes with risks that include fires & radroach attacks.

All your vault dwellers can be levelled up as well as being given state changing outfits & weapons. These are necessary to protect your dwellers & vault against raider attacks that occur periodically. 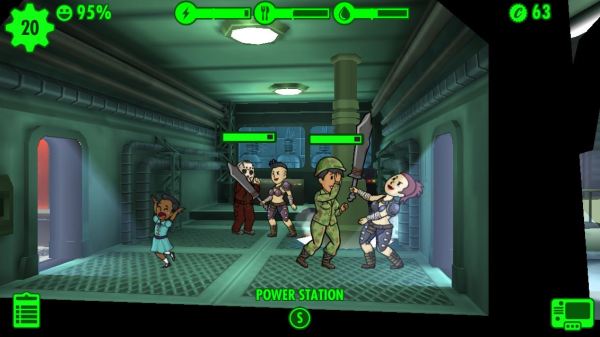 To add more depth to basic sim building gameplay there are 3 objectives that need to be completed at any one time. Finish one & it is replaced by another & they range from having to collect 500 batches of water to birthing 6 babies. Completing them tends to reward you with caps but on occasion a lunch box is gained instead.

These, when opened, release 4 random cards that include things like caps, outfits, weapons & special characters. The lunchboxes are where you’ll potentially spend any real money & is where the usual problem rears its ugly head. 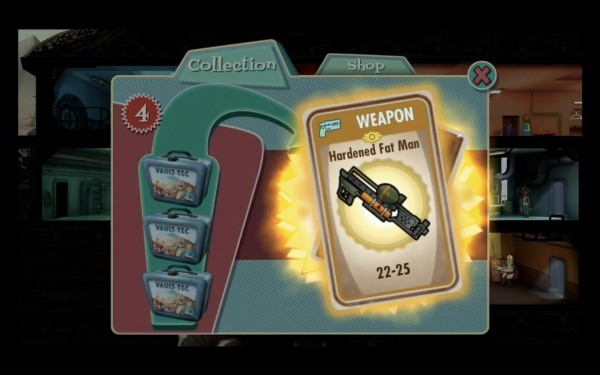 The usual prices that you get in free to play are here starting low (0.79p for 1) before reaching highs of £30 for 40. Now it’s arguable if you think these are worth it as they do offer high rewards but 200 caps really won’t get you much at all. It’s far too easy to buy a bundle of lunchboxes & coast your way to a well-built vault.

The game is fun & very pretty…it’s well detailed with easy to understand gameplay mechanics. The zoom function is excellent offering several ways to see your dwellers working away. 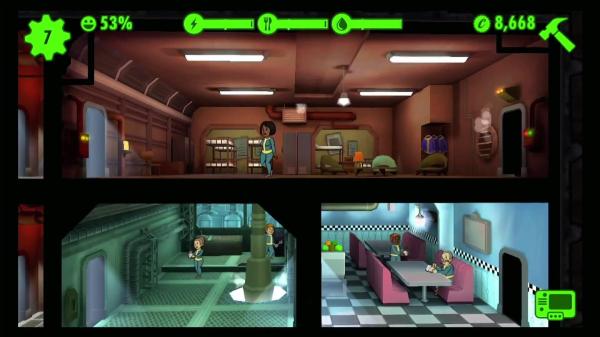 Ultimately though you’ll spend large swathes of time waiting for something to happen & the cycle quickly becomes repetitive. There is no variation with attacks & rooms either go on fire or get infested with radroaches. It’s easy to defend & even if a dweller is killed they can be revived for a small fee.

I can’t slam a free to play game that doesn’t try to swamp you with reasons to spend real money but I can’t see how spending it would actually improve it. The bigger the vault the less there seems to be to do…

Bethesda have managed a rarity in the free to play market…it’s far from perfect but is very playable.