Once a year all crime is legal…they call it The Purge. For 12 hours, 7pm to 7am anything is go & if you’re not purging you best lock the doors & hide away for the night. Crime & unemployment is at an all-time low & it’s thanks to the event, or so they say. The chance to let off steam seems to be doing America some good even if the poorer end of the scale seems to suffer the most.

The first Purge movie focused on one rich family & their fight to survive the annual purge. It was entertaining for the most part but filled with plot-holes & stupid developments. This sequel opens the film up to the streets & several different characters attempts to survive this year’s purge.

The opening of the film introduces these characters as the start of the purge draws near. We have Eva (a waitress), daughter Cali & her father Rico who is terminally ill. The family are poor & struggling to pay for his medication…he recognises that & secretly sells himself ($100,000) to a rich family so they can purge from the comfort of their home. It’s a sobering thought that ties in nicely to what Carmelo; the leader of a resistance group says… the purge is just the government’s way of dealing with the poorer side of society.

We then have Shane & Liz, a couple whose relationship is on the rocks. Stopping at a shop to pick up some supplies on their way home they have a run in with a group of masked gang members gearing up for the purge. Shortly afterwards the couples car breaks down & they are chased by the gang.

Lastly we have Leo, a man who is on his way out to purge…he has a specific target it would seem.

After witnessing Eva & Cali fight off attempts by a group of military style men to kill them, Leo rescues the pair. By chance…Shane & Liz still on the run from the gang end up in his car as well.

Leo’s car is damaged & they group end up on foot. Eva promises to get him a new car as long as he gets them safely to her friend. Leo agrees & the group set off across town as anarchy occurs all around them.

The film is far less exciting than it sounds…once a year all crime is legal. So what we end up with is shootouts…lots of shootouts. The brutal side of the purge is never shown; a few more scenes of uber-violence wouldn’t have gone amiss. That being said there are moments that are both tense & exciting. A showdown between family members & the rich hunting are both memorable scenes. 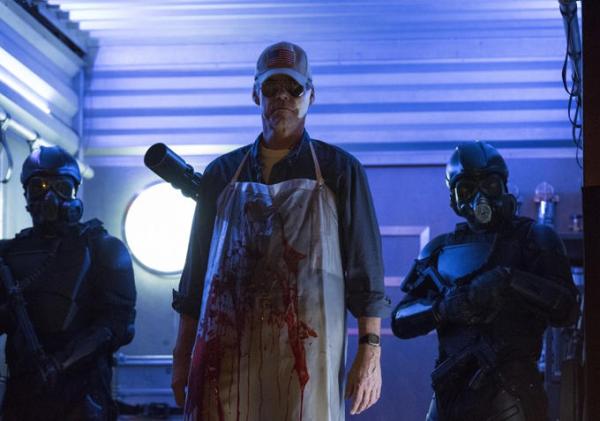 It’s a pity that these moments are few & far between. The Purge: Anarchy manages to do something a sequel should never do & that is bore. The cast are a mixed bunch…Leo is by far the most interesting character. A man pushed to take part in the purge but filled with doubt when faced with helping others in need.

The rest just don’t live long in the memory…the revolutionary group are a joke in reality & the brief screen time is filled with horrible lines & clichéd behaviour (we don’t like the way the poor are targeted so let’s all go out & kill the rich).

The movie signs off in the most lacklustre way possible offering little new within the purge lore. This should have been a chance to expand on the purge idea but the reality is this will never be possible as to many questions would remain unanswered…

For example…so all crime is legal for 1 night. Let’s say I rape my next door neighbour & leave her alive. No-one can touch me as I did on purge night. She can’t do a think legally.

Everyone just goes about their usual lives the next day as if it never happened. The rest of the world just sits back & watches America do this with no intervention or sanctions.

Neither better nor worse than the first…it should have been so much better though.