Swiss necrosadistic elite Eggs of Gomorrh was formulated a decade ago to inject the fuel of depravity, abhorrence and lechery into the human race. Their first bestial manifestation exploded in 2011 in the form of a self-released demo “Rot Prophet”. After lurking for 5 years in the subterranean darkness and occasionally appearing for live annihilations, the Swiss hellhounds finally discharged their debut album “Rot Prophet” in 2016 under the banner of Vault of Dried Bones. Despite having the same title, the full length contains three numbers from the demo, but with totally different and improved approaches. 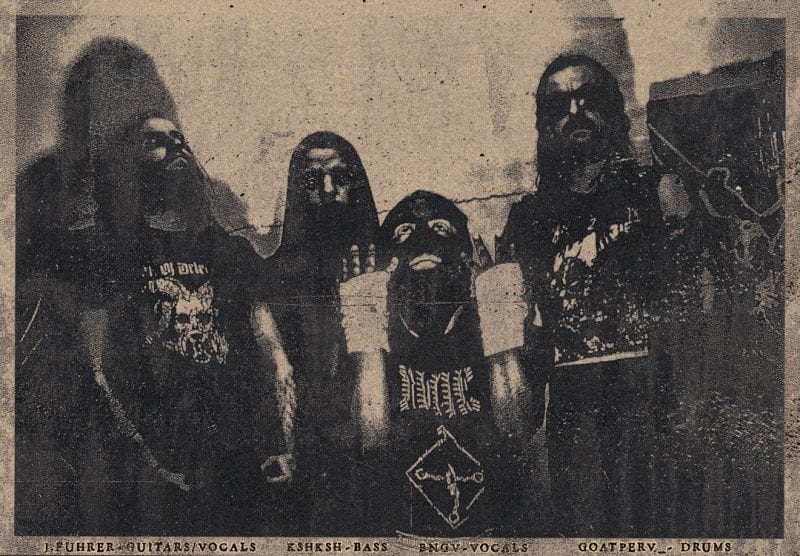 The swiss bestial black/death trio has now made a pact with Krucyator Productions for unchaining their new EP, Outpregnate. Hatching a visible transition of conceptual composition, Outpregnate represents a universe where medieval satanism arises and extinguishes the morality with carnage, apocalyptic hate, eternal sodomy and murder.

This is one of those releases that only you’ll know if you’ll enjoy or not. The extreme end of extreme metal, the 5 tracks and 1 cover song are brutal and scarring affairs. An EP filled with horrors that range from delightfully obscene to absolute carnage.

The ferocity on show from Eggs of Gomorrh is incredible as they pull back the curtain on their blackened death metal sound to reveal the freak show behind it.

They have no ‘off’ switch, no slow option and even when the rhythm begins to resemble something that makes sense they’re quick to smash it apart with sudden bursts of speed or a cacophony of instruments being hit at once.

Rightfully so, it’s over very quick. There is no sustaining this approach for both the band and the listener. It’s fascinating but isn’t going to change the extreme metal world. Instead it slots nicely alongside the many others that look to tear your face off.

The EP can be ordered via Bandcamp here and Krucyator Productions here. Find out more about of Gods of Gomorrh via Facebook.