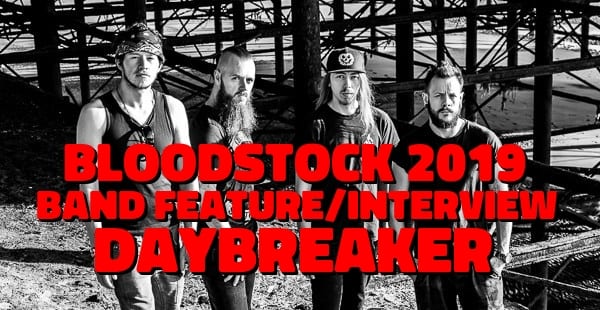 Bloodstock Open Air 2019 is nearly upon us and to say we’re excited is an understatement. We adore the festival and this year’s line-up is simply phenomenal. From the Ronnie James Dio Main Stage to the Sophie Lancaster Stage to the New Blood and Jägermeister Stages, there is something for everyone! Not got your tickets yet!? What are you waiting for!? Head over to the Bloodstock Festival website here and join thousands of like-minded head-bangers for a weekend of quality rock and metal.

Hailing from the Bleak north-west coastal town of Blackpool, Daybreaker formed in November 2015 and after trying out different members, the line up was finally complete after a couple of months. They started immediately working on material for live sets in their hometown and have played all around the north west ever since. In the three years since they formed, these miscreants have plagued bars, clubs, and all manner of venues throughout the UK with an unquenchable thirst for all things heavy.

They also released an EP, parted ways with lead guitarist and have secured themselves a slot on the Jägermeister stage at Bloodstock 2019. They have no intention of bringing the groove to a stop anytime soon.

They will be playing the Jägermeister Stage on Saturday the 10th August 2019.

1. Congratulations on being added to the Bloodstock 2019 bill. A big deal, right?

Thank you! Most definitely, it’s a huge deal for us all, it’s the biggest show we’ve played so far, we’re all really stoked to have the opportunity to play such a huge event!

2. Have you ever been to the festival before?

A couple of us have been before, I (Sam) last went in 2010, and had an amazing time, as I remember I did around 6 festivals that year and was a bit broken by the end of it, Bloodstock was definitely the best atmosphere for sure.

3. You’re on the Jagermeister Stage. What can Bloodstockers expect from your set?

We’ve got a lot of energy in our performances, so expect some heavy grooves and breakdowns galore; definitely something to swing your head to!

4. Does the idea of playing such an intimate stage excite you? Its position means almost everyone passes it as they move around!

Definitely, hopefully we’ll snare some folks who weren’t planning on seeing us too, but for sure, with it being an intimate stage the atmosphere is going to be electric, and the breakdowns will shake your soul.

5. Are you there all weekend? If so who are you most looking forward to checking out yourself?

A couple of us are there for the weekend, but some of us (Sam) will only be there for a couple of days, were all looking forward to seeing Soulfly, Thy Art Is Murder, Parkway Drive, Swallow the Sun, Aborted, and Dimmu etc, on the main stages, but the smaller stages are definitely going to be where it’s at.. with Rotting Christ, Footprints In The Custard, Barbarian Hermit, Harbinger, Grand Magus and Raging Speedhorn etc. on the Sophie Stage and our boys in Grand Elder on the Newblood stage, we’re going to be spending a lot of time around there.

6. What does the rest of 2019 look like for Daybreaker? Shows? Releases?

Lots more shows to come around the UK, we’re in the process of recording our follow up E.P which (if all goes well) should be released by the end of the year, just lots and lots more heavy!!!