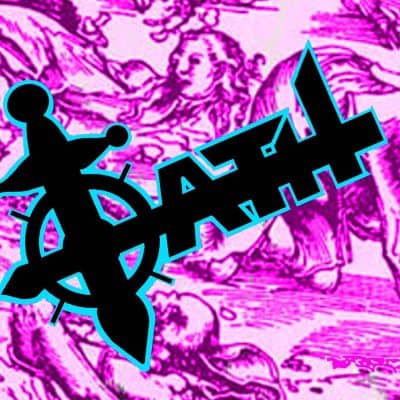 Conceived in 2018 by Steve Waddell as a solo project, Oath evoke the glory of an early 80s garage band. A reverb drenched haze of twisting riffs and serpentine solos. Lose yourself with Oath.

Games, Brrraaains & A Head-Banging Life are pleased to bring you an interview with Steve Waddell, the main behind the band!

Hey Carl! Yeah it’s been a year! I’m holding up well though, keeping super busy. I have 3 kids, a full time job and of course Oath so I haven’t had time to be bored!

2. Have you managed to stay positive and what advice would you have for those struggling?

I’m generally a pretty positive guy, I decided as soon as the UK lockdown was announced that i was going to use the down time to be creative . It’s helped me to have a constant focus. For anyone struggling I would suggest finding something creative to do, music, art, knitting pillow cases, whatever! Use the extra time and the lack of distraction to your advantage, there’s a lot going on that we can’t control so focus on the things you CAN control and make a difference in those areas.

3. So, what’s new with Oath? Your last release, Legacy was right at the start of this atrocious year!

I always forget it was released this year, feels like forever ago. Lots going on with Oath right now, as I said I decided to use lockdown to my advantage and committed to having at least a single out by the time we had to go back to work. The plan started as 2 songs for a split with some other bands but as that didn’t work out I eventually turned the two songs into an album, so between June and September the bulk of the record was written and recorded.

4. What inspirations did you use when it came to the writing of this new release?

Lyrically it’s sticking to real shit. The last record was very personal, each song was essentially a letter of instructions to my kids so they would always have some guidance from me whenever they need it. This time round it’s more about reflecting the world I see around me, it’s an angrier record this one, there’s frustration with the world in there. The theme of small town living and small town mentality is prevalent throughout. Social media trolls are taken to task in the title track Computer Warrior, it explores how people’s attitudes are different online than in real life. People say stuff they would never have the courage to say out loud.

It’s a concerning digital wasteland we are leaving our kids to navigate, as a parent it’s a worry you know? I guess educating our kids is the best way to keep them safe. There’s a lighthearted dig at us metal heads in the track Gatekeeper, cos we kind of are all gatekeepers to an extent right? I know i bristle when I see a Kardashian in a Slayer shirt but then are kids seeing the shirt and then finding the band and having their lives changed for the better? It’s hard I think for us to allow others into our club, probably because for so many of us it’s provided a safe haven in hard times.

It’s been a companion when we never fitted in so I get the gatekeeper mentality, we should maybe just be more aware of it! That’s why I never really got the whole “wimps and posers” thing…cos for me metal was always for the wimps you know ? Like it’s ok if your not tough, it’s ok if your not sporty, it’s ok if you don’t fit in cos James Hetfield’s right hand has got your back! This answer is gonna piss some people off I can tell.

The main thing with this record is that I’m really trying to say something, bare my soul a little. There’s enough metal songs about fantasy and horror and sci-fi, i figured I would mine a different seam. I hope people will listen to the words and relate to them directly, no metaphors here.

5. How did Trevor’s involvement come about?

So Trevor and I have been FB buds for a while and we hooked up after Haunt played Bro Fest and had a chat there. He’s always given me little bits of advice and generally been supportive. I posted the song Confess on my insta and Trev picked up on it, said he loved it but not the digital drums, he then said I should let him drum on it….obviously being a Haunt fanboy I jumped at the chance. At that time there were just 2 songs, Trevor called and we agreed to do an Ep, that then grew into an album!

It’s been frantic! Hence why I’m not bored! So he’s drumming on it, also he’s done an outstanding job producing it, especially considering what he had to work with because as far as recording goes I’m pretty clueless, and being on the other side of the Atlantic it’s not like he can just press record and say “play that bit again” he’s also dropped some killer backing vocals on this so if your a Haunt fan it’s gonna have a familiar vibe to it for you. It’s been a massive learning curve too, as a producer Trevor won’t just fix your mistakes, he’ll fix them but then call you to explain what you did wrong so you don’t mess up again. That’s been a huge help to me, lots of free lessons!

6. The goal of Oath is capturing the ‘80’s garage metal band’ feel. Is that an era of metal that you find the most appealing? If so, why?

I guess, I just like metal that has feel and vibe, I don’t care if the performances are perfect, i think a lot of modern metal is very cookie cutter, cut and paste, leave the settings on the desk for the next band. My favourite records sound like early 80s Maiden, Angelwitch, Cirith Ungol, I like to hear a mistake, a raw performance, hissing guitars. That being said in terms of sound and production this record represents a huge step up, we still have that garagey vibe but it’s gonna be a lot more pleasing to the ear. It’s an honest sounding record and it seems like in metal circles that kind of vibe is coming back, I guess because more bands are embracing the DIY thing.

7. How well do you think Oath handles the modern pressures of being in a band? Basically, doing everything yourself!

Up till now iv done it all myself and it’s enjoyable! It’s really satisfying seeing people enjoy something that you have created from the ground up, that being said I have had help from labels to get product out and I think you need that unless you have cash. Now working with Trevor it’s not just me and the main benefit there is you get some objectivity, someone slightly removed that can give a good honest opinion, as a one man band you have no one to reign you in which can be a blessing and a curse.

8. Do you feel as though you’re well positioned to handle the stress and demand of social media? It’s pretty much a requirement these days!

It is and it’s not easy, algorithms change all the time. I research it a lot and I’m always watching videos on how to grow social media. For me it’s more important because socials are kind of like my equivalent of a gig. I try and post as regularly as possible. The key thing for me on social media is being available, if you comment on one of my posts I’m gonna reply and we will have an interaction. I think that helps build fan loyalty and I enjoy the contact too.