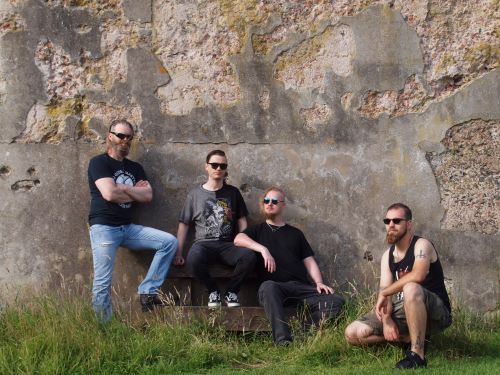 Games, Brrraaains & A Head-Banging Life are pleased to bring you an interview with power/thrash metal band, Helestios.

1. How did you get started as a band?

We exchanged some ideas with guys already few months earlier but its fair to say Helestios was formed in early 2020 and assumed it’s mission, direction and sense of movement since then. Coincidentally enough the outbreak of deadly plague happened and Umbrella corporation took over the world governance soon after and ever since we are trapped in homes and scared of undead to come and feed on us… So through this time we got our debut album together and managed to get some positive attention from likeminded metal listeners which is awesome!

2. How would you describe your sound?

Well it’s probably better to let others decide and make comments on this one as for ourselves we’re happy with it and focusing more on thematics in music which is another great topic on it’s own.

3. What bands/artists would you say have influenced your style of music?

Every decent metalhead will agree there are certain bands you just can’t avoid. And so they’re always somewhere at the back of your head regardless. We didn’t try to mimic any particular band or act – it was more like a journey of events and feelings that we wanted to put in through the album and so we mainly focused on that.

4. Has the rise of YouTube & music streaming helped or hindered you as a band?

Today’s online streaming capabilities are just great in terms of reaching out to people. I guess there’s always a downside and in this case it’s probably the income of bands and what perhaps is less spoken about – the fact that now there are so many bands out there and dozens of platforms – it can be really challenging to find the artist. As paradoxal as it may sound but with having more means to get exposure there’s now more chance to just not get noticed, simply because there’s so many artists compared to, say eighties or even nineties.

In our case – we’re trying to focus on making good music and then let the people decide if it’s any good!

5. What do you enjoy doing when you’re not making music?

Just standard active lifestyle – travelling, going to gigs, gym, reading, and looking for new spots to fly a drone, beer. Nothing too much out of the box.

6. What are your future plans musically? Tours?

We are slowly getting into a pace of writing material for next album and we are also looking forward to the moment when finally these ridiculous restrictions are taken off and we can do live performances. If they could allow black Friday to happen in the peak of pandemic, surely then festivals can’t be that much more dangerous, especially because nobody is forcing anyone to attend them – people choose for themselves to be out in the air and in the crowd.