Regardless of who you think the true Venom is now, as metal fans we can’t complain about getting two variations that are releasing quality albums. Venom Inc’s newest release, Avé is a damn quality album & is out now via Nuclear Blast Records. 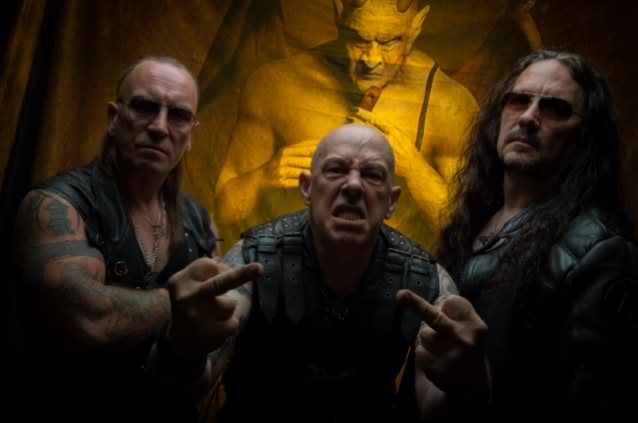 After a short gothic start, opener Ave Satanas gets the blood pumping with thumpingly heavy riffs, a gorgeous rhythmic beat & gravely animistic vocals. It’s an absolute ‘burn the mother-fucking house’ down opening track making you realise that if the rest of the album is even half as good as this, you’re in for a good time.

Distancing themselves from the black metal style of early Venom, Venom Inc have injected a more traditional metal in their sound. Tracks like Forged in Hell, Blood Stained & Time to Die scream absolute fire with blasting solos & heavy beats. It helps that Tony Dolan is causing absolute chaos with his gruff but classic sounding vocals.

There are moments though where things kind of peter out. The Evil Dead is a very ‘middle of the road’ song, neither good nor bad & probably could have been left off the album. Whereas Preacher’s chugging riff & simple drum beat is nice & catchy but at nearly 7 minutes it goes on for far too long.

Minor complaints really as the rest of the album is packed with the kind of heavy metal that sees a sneering smile creep across the lips.

The likes of Metal We Bleed & Black n Roll have a certain kind of cheesiness about them with the entire band shouting ‘metal we bleed’ in the former. They still excel thanks to a thumping tempo that gets the heart beating even faster in an attempt to keep up.

Avé is out now & can be picked up & streamed via most major shops & services including Apple Music below. Check Venom Inc out over on their website & on Facebook.