Devildriver are back! After 4 years, member changes (again), an official hiatus and a new record label they have a new album out called Trust No One. With so much going on in the background surrounding the band, could the music survive? Would Devildriver still be the thrashy, aggressive, rhythm based metal band we know and love or was it all change and were they right to warn us to “trust no one”.

Well, let’s put that one to bed right away by saying that there is no doubt this is Devildriver as you know them. Blindfolded, you would know exactly who the band was on pretty much every song within a few seconds of it starting. Whether that is a good thing or not, well, read on for my opinion.

A little background on the band first though. Devildriver were formed in 2002 by Dez Fafara who I once would have introduced as of Coal Chamber fame but in truth, Devildriver are a much better band and the one he will be and is remembered for. Originally the band were called Deathride but had to change their name for legal reasons which isn’t a bad thing. I much prefer Devildriver as a name. The band hails from California and the current members in the band with Dez are Mike Spreitzer and Neal Tiemann on guitars, Diego Ibarra on bass and Austin D’Amond on the drums. Dez is the only original member of the band and there have been multiple changes to the line up throughout the years with 6 former members listed. With all respect to the former and current members of the band, I do get the feeling that this is Dez’s band and like bands such as Cradle of Filth, it is the front man who is the only irreplaceable member of the band. 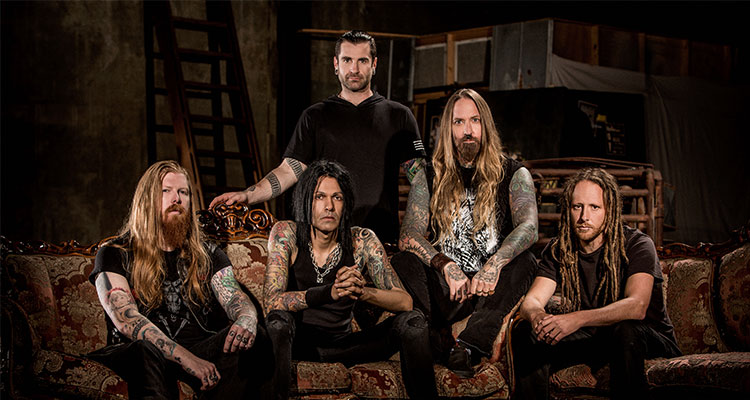 After 4 full album releases prior to this one, Devildriver had become firm favourites of the heavy metal community renowned for the fast pace, aggression and brutal circle pits. They had a collection of albums that were good and a splattering of songs on each album that were brilliant with I’ve Been Sober being a personal favourite. Their last full release, Winter Kills, was probably the least favourably received though that isn’t to say it didn’t have its fans. What happened next probably explained the slightly stressed sound of Winter Kills though with drummer John Boecklin and guitarist Jeff Kendrick leaving the band before Dez announced the band were officially on hiatus so he could focus on his Coal Chamber reunion. 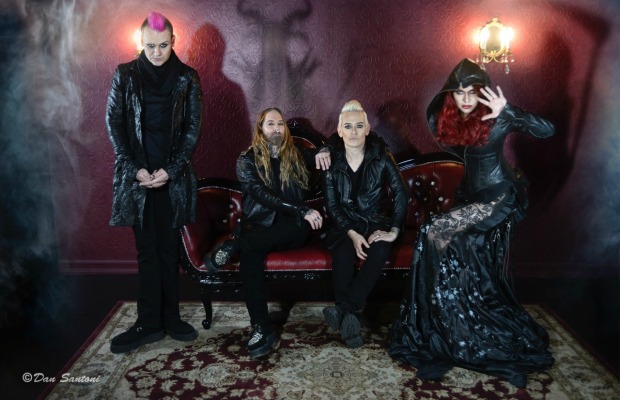 That one always confuses me. Devildriver are ten times the band Coal Chamber ever were so having them put on hiatus for a pointless reunion didn’t sit well with me or many other fans but that is done now and even Dez has stated that the Coal Chamber chapter is now closed for ever and Trust No One is released.

Trust No One, released in May 2016, has 12 tracks on it and is around 52 minutes long. I think it is also important that I point out here that I am reviewing this after a second listen. I wasn’t overly impressed on my first listen. There were some good moments but nothing that stood out but a second listen has changed my mind a bit. There are still tracks on here that I think are very generic and sometimes a little dull. My Night Sky is one I didn’t really feel much love for. Lyrically it just feels like the title being repeated a lot and while it has a nice rhythmic pace to it and some interesting moments, particularly in the intro which as an eerie feel to it, it just felt like it lost its way a little. The same can be said for Above It All which again has moments where it threatens greatness without ever making it. The drums on Above It All are great, Dez sounds particularly pissed off here but the chorus doesn’t have that catchy feel to it and the guitars are often drowned out by the vocals making it feel a little one dimensional. Feeling Ungodly is one of the fastest and heaviest sounding tracks on the whole album. The drums are mind blowing but the song seems to be lacking a main riff to carry the song along and a fourth, House Divided also ticks these boxes in having an interesting eerie intro, great drumming and a blistering pace but I don’t like the chorus and the solo seems a little forced. 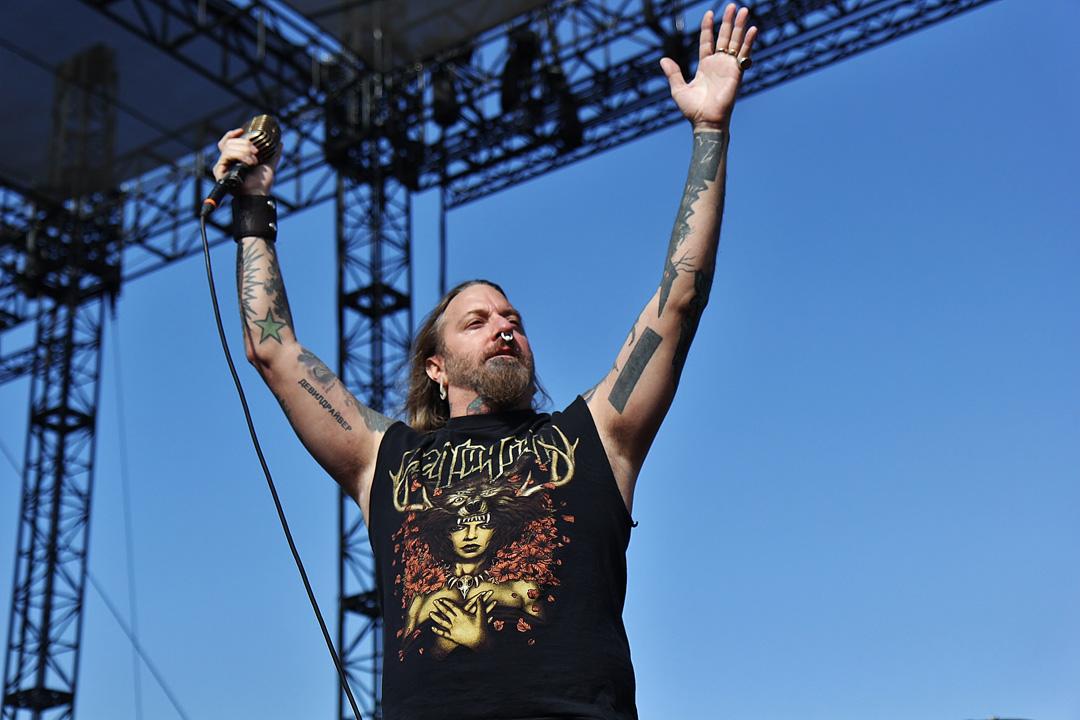 Not a good start really with me pointing out 4 tracks that I am not keen on. That isn’t to say they are 4 bad songs. They aren’t. They just felt a little bit too much like album filler.

With those negatives out of the way though, on to the positives. My favourite track on the album is Daybreak. It has a really cool intro with long drawn out guitars and more excellent drumming. The vocals are more rhythmic and catchy and the chorus is brilliantly singable. The guitars are really prominent and there is a great little line played in the background during the chorus. It switches pace up quite a bit and has a brilliant guitar solo. There are plenty of other good tracks too with the title track, Trust No One also ticking loads of boxes in having a great chorus, great solo, brilliant drumming and being brutally heavy. Bad Deeds is the shortest and fastest track on the album and will be a circle pit starter as will the final track on the album, Evil On Swift Wings which is a solid way to end an album.

There are also plenty of songs that carry that signature groove that Devildriver bring with Retribution leading the way on the groove scale. That is helped with it being one of the tracks where the bass is really prominent, especially in the intro. This Deception is also laden with groove and rhythm and even has a few experimental touches in a piano and horn intro that builds into a truly heavy yet rhythmic number. Testimony of Truth also holds its rhythm well, especially the early sections of the song and is carried along by brilliant drumming and a great guitar solo. Some more experimental intro music can be found on For What Its Worth with an orchestral feel to the intro before it kicks in with a heavy but not necessarily speedy track that again oozes drumming quality. 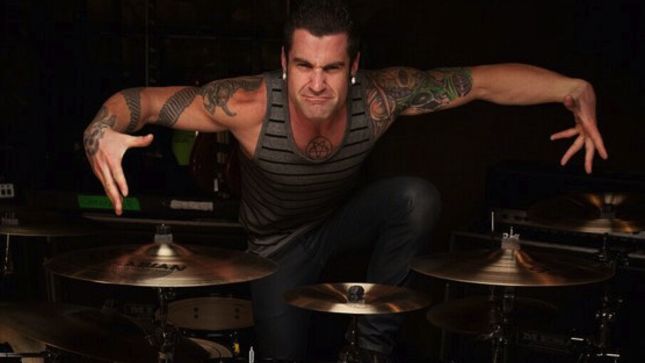 The album also seems pieced together well as well with a good first track and a good end track. The filler is in the middle and separated by good songs so that probably saves it a bit. A few of those in a row may have hurt the album a bit too much.

The real highlight of this album though comes in the drums. They are often the most memorable thing of many of the tracks on here so the replacement drummer, Austin D’Amond is a great addition to the band and they haven’t suffered too much from the loss of John Boecklin.

So there you have it. I like it. I don’t love it but I do love a couple tracks on here with Daybreak, Trust No One and This Deception probably being the stand out ones. The rest of the album is fine with some good tracks and some average tracks but they are all unmistakably Devildriver. If you want to see a band pushing boundaries and trying new things, this isn’t it and they aren’t it but as much as I like that in bands at times, you do need bands who just populate the genre with good metal and I guess that is what this is. Good mosh pit ready metal.

Trust No One is a good metal album with a couple highlights and a couple lowlights and plenty of songs that probably sit too comfortably in the middle. It is good to have them back as a band and I am glad to hopefully see the back of Coal Chamber for good now so that Devildriver can settle back down and hopefully push on from this. I urge you to give the album a second or third go if you didn’t like it much the first time round. I found that it grew on me. The drums were often brilliant, vocals are often solid and aggressive, bass, when heard, is often strong and guitars are often excellent with many solos littered throughout.

Devildriver – Trust No One (Napalm Records)

0 thoughts on “Album Review: Devildriver – Trust No One (Napalm Records)”