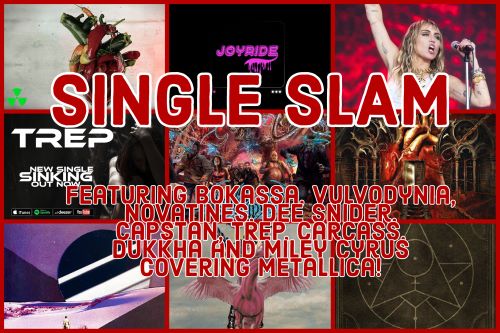 This week’s single slam features Bokassa, Vulvodynia, Novatines, Dee Snider, Capstan, TREP, Carcass, Dukkha and Miley Cyrus Covering Metallica. You can read our thoughts about the latest singles from these bands below.

Bokassa – Careless (In The Age Of Altruism)

After recently signing with Napalm Records, irrepressible Norwegian power trio Bokassa are fully charged and ready to set everything ablaze on their upcoming album, Molotov Rocktail, out September 3rd, 2021 via Napalm Records. The band kicks things off with their raucous first single “Careless (In The Age Of Altruism)”.

‘Careless (In The Age Of Altruism)’ was one of the first tracks written for Molotov Rocktail and a single candidate from the get go because of its crunchy riffage and affective hook. As with ‘So Long, Idiots!’ our protagonist has become more and more disillusioned with the world, and tries his best to avoid it, while existing comfortably in his own bubble. We also think it may be the only song that includes the word ‘Didjeridon’t’?

A bouncy and catchy effort that is undoubtedly all about its hook, Bokassa are having a bit of fun with this one. All while having enough meatiness to the riffs to keep it on the heavy side. That bloody chorus though. It will really get stuck in the brain.

This single is definitely one we’ve really been looking forward to releasing. It showcases a very different side of Vulvodynia that we are very proud to finally be unveiling! Praenuntius Infiniti is a concept album and ‘The Eternal Wasteland Of Galaxies’ is a small chapter where our main character has swallowed the world and all events henceforth are taking place in his belly! We hope critics and fans alike will accept this new sound and concept and fall in love with it as much as we have!

Gawd damn, there are very few bands who slam as hard and as intensely as Vulvodynia. The new album is going to be killer, that much is sure but if you need any more convincing then this absolute beast will do it. However, importantly what this track also does is show how the band is moving forward. In particular techy flourishes and a bit more melody. It’s still utterly face-melting heaviness but with a much more confident mix of sounds and ideas.

Produced by the band at Factory Studios in Bristol, explains lyricist Jamie Beale about Joyride:

The sheer corruption, greed and contempt that the ruling elite has over the world. We live in a reality where billion dollar companies are literally setting fire to the planet for short term gain, while politicians skirt around the bigger picture in order to increase the digits in their bank accounts. So many of us idly stand by and watch these horrors unfold time and time again, as if the destruction of our home is nothing more than a television show, filmed in front of a live audience. Joyride is about waking from the daydream, and standing up on our hind legs and demanding that it is time for real change, because without it, we are nothing”, explains lyricist Jamie Beale.

Three minutes of high-voltage rock with a punchy and punkish statement. Anyone who looks to the ruling class with disgust can find plenty to connect to here. Even if the lyrical content doesn’t interest you, the aural energy the band exudes will. Animated and passionate rock music with a memorably catchy chorus. A strong song from Novatines. Check it out here.

Dee Snider and Corpsegrinder? Why the hell not!?

This is a track with some serious heft to it. Heavy and fast with the two vocalists playing off each other in quite a unique way. It seems as the older Snider gets, the heavier his music is getting as this has thrash and speed metal energy. Albeit with the addition guttural death vocals provided by the legendary Cannibal Corpse frontman. It’s a head-banger and the kind of collaboration you never knew you needed. Check it out here.

It’s an outlier. It’s the one song on the record that’s a classic ‘Fuck you’ about someone shitty I knew who really took advantage of me and treated me poorly.

You don’t need to know who the ‘fuck you’ is aimed at to feel the sentiment behind it. The early solemn tone builds and builds towards a punchy, impactful anthem. The riffs are serrated, the vocals are powerful, and the bass and drums are super thick. It’s a fist in the air track with tones of metal power, exemplified by a ferocious sounding breakdown. Check it out here.

TREP are a 4-piece heavy rock band (with metal & prog elements) from South Wales. They have released the first single from their new EP ‘Renewed’.

The opening riffs and bombastic bass/drum combo at the start of this track has an air of the Panteras about it. However, with the arrival of the smooth and powerful vocals, it gets way chunkier leading to a pretty bombastic chorus. Darker and heavier, the disciplined rhythm goes on and becomes more and more infectious. A great introduction to this new EP, TREP’s Sinking is a bit of a banger.

Taken from their upcoming new album ‘Torn Arteries’, the British death metal legends that is Carcass has released the single Kelly’s Meat Emporium.

Relax, Carcass are not chilling out in their old age. Instead, they seem to be getting tougher and rougher. As this new track sees them incorporate more grind elements into their powerful style of old-school death metal. There’s nothing dated about this track though and it still sounds like a Carcass moving forward rather than stagnating.

If the album as whole has even a quarter of the noise that emanates from this track then we’re in for something really, really brutal. Check it out here.

French modern metal band Dukkha are back with their new single: Karoshi, produced by Convulsound Productions (Thibault Bernard). This second single follows “Giant Storm” unveiled in early 2021, and illustrates a return to the musical roots of the band, mixing heavy riffs and introspective / melancholic melodies. The video will be premiered via YouTube on July 1st, 2021.

About this track, Dukkha says:

Karoshi is musically in line with our first album “Legacy”, while offering a much more detailed sound atmosphere (directed by William Edery), a classical instrumentation, fast riffs and a clean melodies where the harmony of guitars is put forward. The clip, directed by Aurélien Mariat, is a huge leap forward for us because it is the first storytelling clip that we are producing with Dukkha. Karoshi tells the story of a man psychologically and physically enslaved, we called on several of our relatives to give life to the protagonists of the song.

Karōshi (過労死, literally “death by overwork”) refers to the sudden death of executives or office workers by cardiac arrest, stroke, or suicide as a result of overwork, burnout, or too much associated stress. Karōshi has been recognized as an occupational and professional disease in Japan since the 1970s.

How’s that for some inspiration? Dukkha taking that and being inspired to create a modern melodic heavyweight track. Karoshi is a beast of frenzied riffs, blistering hooks and grinding beats with meaningful bouts of melody. You’ll go from savage circle pitting and wild head-banging to pensively staring at your shoes while the emotional weight of the harmony takes hold.

Then at around the 3-minute mark, Dukkha shows off something that makes their brand of metal that little bit more unique. The sound of classical string instruments adding even more grandness to an excellent offering. You will be able to check it out here.

Elton John, WATT, Yo-Yo Ma, Robert Trujillo, and Chad Smith all contributed to Miley Cyrus’s new cover of “Nothing Else Matters,” from the Metallica tribute record The Metallica Blacklist. Along with Miley Cyrus, 52 other artists “spanning an unbelievably vast range of genres, generations, cultures, continents and more” perform a unique rendition of their favorite song from Metallica’s self-titled fifth album, also known as The Black Album, in honor of its enduring impact over 30 years.

The Metallica Blacklist is out on September 10th 2021, with proceeds going to over 50 charities.

All the proceeds for this album are going to charity, that alone makes it worthwhile. We get it though, as we’re not particularly interested in hearing 5 different versions of Enter Sandman or Nothing Else Matters. However, the idea of having a wide array of artists covering classic Metallica songs is at least intriguing. Hence why the Miley Cyrus cover has been included for review here.

Cyrus should need no introduction. One of the world’s biggest popstars even if you’ve lived in a cave all your life, you’ll have heard of her. She probably came swinging in on a wrecking ball. Love her or loathe her, she has an incredible voice and it is put to great use here. She sounds great here and she throws a lot of energy and passion behind the track. It’s the standout element as the Nothing Else Matters makeup overall is kept intact (mostly).

Instead of the guitars and drums being at the forefront (although they are there and more prominent in the latter part of the song) it’s all about the piano and cello. The former played by the one and only Elton John and the latter by Yo-Yo Ma. Do you need us to tell you know good they are?

Here’s the thing… aside from an unnecessarily dragged-out extended ending, it’s Nothing Else Matters. It’s a great song performed by great artists but it’s never going to replace the original. Although it might gain Metallica a whole new set of fans.