In 1980, somewhere in the world a rock fan will have taken to the streets in a ripped and/or dirty pair of tight jeans as a middle finger to society. Ten or twenty years later and every fashion conscience teenager goes out at some point to their local Weatherspoon’s for a bottle of WKD wearing the same things but now, it is fashionable.

You may find this hard to believe but punk, rock and metal are accidentally some of the most fashionable music scenes out there. Without ever trying to fit in, the fashion styles embraced by the metal world to distance themselves from societal normalities eventually get claimed by society as their own. Rock and metal moves on to a different style to differentiate themselves again before that new style gets claimed and so on and so on.

Just think about the ripped jeans, cargo shorts, denim patch jackets, oversized baggy jumpers, t-shirts with rude slogans and horror styled imagery, wallet chains, military styled boots, skate trainers, wrists covered in bracelets and bands and even to how common place tattoos and piercings are now. I am not claiming these things to have been created by fans of rock and metal, just embraced by them, but all of these things have also crossed over into being embraced by the rest of the non-metal world.

So many pairs of ripped jeans, converse, Dr. Martens and Vans will be out there in the closets of Justin Bieber’s fans. The once frowned upon tattoo now shows on the bodies of so many Madonna fans, though often only in the form of star or a butterfly, and, though more likely to be colourful, so many Avril Lavigne fans have wrists adorned in bangles, bracelets and old laces.

The rest of the world owes a huge thank you to us and rather than singling us out as, at times, weird looking, should show gratitude for the inspiration we deliver. We should be elevated.

There are some styles however that they have, quite rudely, been missed to date. Some styles that they deem too outrageous or outlandish to copy despite their willingness to worship people who wear dresses made out of pork chops. The list below are the more inventive creations yet to be claimed by popular culture. I keenly look forward to the day that Burtons and New Look start stocking these alongside their black t-shirts with sparkly guitars on them.

Cradle of Filth make great use of horror and vampirism in their image which acts as the perfect back drop to their black metal music. The screams and shrieks of the front man Dani Filth are amplified by the clothing he and his bandmates wear. While their outfits have been tweaked over time, often to suit the concept of the album they are working on, my personal favourite was the vampire styles of the older Cruelty and the Beast days. Lots of leather and chains to go with jet black hair and pale faces mixed with this music makes quite an impact when seen live. While we do have the Goth look, it has never taken off due to a complete lack of leather, or even PVC, available in high street stores.

Turisas look fantastic dressed in their famous Viking gear. Wearing furs, armed to the teeth with swords, axes and shields while painted in red and black war paint the look they have chosen adds legitimacy to the music they play. Imagine how different it would be if they were all just wearing shorts and t-shirts? Surely every man out there wants to dress up like this on their way to the local store to pick up some sushi? Make it happen high street!

So Slipknot originally claim to have started wearing boiler suits and masks to avoid the fame of their faces being visible which “accidentally” lead to their masks and boiler suits being possibly the most recognisable outfits in the world of music. Whatever your thoughts on that, it works brilliantly for them and suits their brutality perfectly. While the masks have changed a lot over the years, it is the early iterations of these I remember most fondly and, being the first ones, they are also the ones that had the most impact. While boiler suits are available from many hardware stores, the full effect really only comes from the adding of the mask and unless it is Halloween, they are not easily found……………………yet.

To be fair to GWAR, they are actually exiles from other planets so while we may find their costumes as a little odd, they could be the norm “back home”. Either way they have huge visual impact. Looking like X Rated Power Ranger bad guys, I think they look amazing and if these fashions ever get picked up by those of a trendier persuasion, all the dull moments in life will be instantly brightened. Just imagine how much more exciting a bus journey home from work will be? Or how about that long wait for a delayed train while an irate commuter yells at a worker while wearing these outfits? Let’s hope. 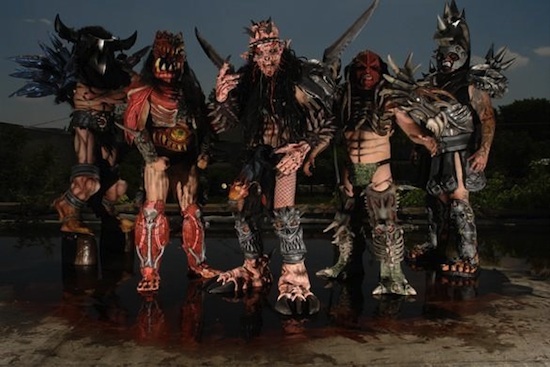 Finally, I give you the style of Ghost.

A band who are a bit like musical marmite to many people, as in you either love them or hate them, but one thing everyone agrees with is that they look amazing. Visually they make a huge impact and people definitely sit up and take notice. Just take a look at their recent Grammy appearance. Heads were turning all around them as they appeared in public in full outfit. In comparison to some of the crazy clothes worn by “celebrities”, they looked pretty normal actually but we are yet to see any of these clothes in high street stores!!

So there you have it, after years of ripping off the intriguing and inventive fashion sense of the metal community, these could be the next trends to appear on a high street near you. There are many more bands who also do their bit in regards to how they look such as Behemoth, Mudvayne, Dimmu Borgir, Mushroom Head and many, many more.

Anyway, let’s face it, I would rather see my daughter out on the streets dressed as a member of Ghost then as a fan or Beyonce or Shakira any day.