Halloween is a remake/reimagining of the 1978 horror film of the same name written, directed and produced by Rob Zombie; it is a reboot of the Halloween film series, making it the ninth installment of the franchise. Working from John Carpenter’s advice to “make the film his own”, Zombie chose to develop the film as both a prequel and a remake, allowing for more original content than simply re-filming the same scenes.

Michael initially cooperates with Dr. Loomis, claiming no memory of the killings; his mother, Deborah (Sheri Moon Zombie), visits him regularly. After a year, Michael becomes fixated on his paper-mâché masks, closing himself off from everyone, even his mother. When Michael kills a nurse as Deborah is leaving from one of her visits, she can no longer handle the situation and commits suicide. 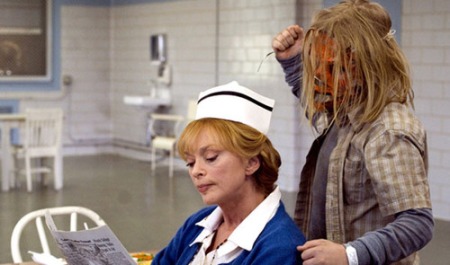 For the next fifteen years, Michael (Tyler Mane) continues making his masks and not speaking to anyone. Dr. Loomis, having continued to treat Michael over the years, attempts to move on with his life and closes Micheal’s case.

Later, while being prepared for transfer to maximum security, Michael escapes Smith’s Grove, killing the sanatorium employees and a truck driver for his overalls, and heads to Haddonfield. On Halloween, Michael arrives at his old home, now abandoned, and recovers the kitchen knife and Halloween mask he stored under the floorboards the night he killed his sister.

The story shifts to Laurie Strode (Scout Taylor-Compton), and her friends Annie and Lynda on Halloween. Throughout the day, Laurie witnesses Michael watching her from a distance. That night, she heads to the Doyle residence to watch their son Tommy. Meanwhile, Lynda meets with her boyfriend Bob at Micheal’s childhood home. Michael appears, murders them, and then heads to the Strode home, where he murders Laurie’s parents, Mason and Cynthia).

Having been alerted to Micheal’s escape, Dr. Loomis comes to Haddonfield looking for Michael. After obtaining a handgun, Loomis attempts to warn Sheriff Brackett that Michael has returned to Haddonfield. Brackett and Dr. Loomis head to the Strode home; with Brackett explaining along the way that Laurie is actually Michael Myers’ baby sister Angel.

Can they get to Laurie before Michael does? I won’t spoil the rest of the movie for anyone that’s interested in seeing it.

Firstly, let me just say that I personally think that many peoples issue with Micheal’s childhood and the scenes involving his redneck family are very valid indeed. While I do think some of the scenes are intriguing and Daeg Faerch does a good job as a young Michael the problem that arises while doing this with “Halloween” is that it comes into conflict with the concept of Michael being purely evil. Although I can understand what Zombie was trying to do by exploring Micheal’s background, it contradicts the whole point of the original. By providing a reason and displaying a human character on screen, you give the character a soul – and despite what Zombie may claim, this does NOT make Michael scarier. It makes him an average movie serial killer: a guy with a messed up life as a kid who snaps one day and goes on a killing rampage. Giving Michael Myers this kind of background does nothing but humanize him which completely steals his character of any intrigue or mystery and it’s that mystery that made him so damn scary in the original.

Another huge issue that I found was that other than two or three characters, it’s very difficult to feel bad for many of the people that Michael murders. In most cases they are portrayed as arrogant, grotesque human beings and I couldn’t help but feel a slight sense of joy seeing them get their comeuppance.

Character development is another problem with Zombie’s Halloween. During the first two acts of the film I was made to believe that Michael was the main character of the movie but suddenly during the third act we are introduced to Laurie and it feels kind of rushed leaving her feeling under developed and lacking any real personality that makes her stand out from her group of friends. Now don’t get me wrong, I think Scout Taylor-Compton does a fantastic job with the Laurie character considering the time she has but it could have been handled better. The reason why this is such an issue is because it leaves her character feeling very disposable like many of the others which is the complete opposite of the original. In my opinion, the killer of any movie should never be portrayed as the main character.

Okay, now for some of the things that I did really enjoy about the movie. Firstly, Halloween has never looked this good. The cinematography for the film is excellent and really adds to some of the more intense moments, particularly during scenes involving Michael murdering someone.

Malcolm McDowell was a brilliant choice to play Dr Loomis and ends up being probably the only likeable character in the entire film. I liked the he isn’t as clear cut as Donald Pleasance was. He has faults and also does some shady business attempting to make a profit off of the Meyers case.

One of my favourite things about Rob Zombie’s Halloween was the decision to cast Tyler Mane as Michael Myers. The man is freaking huge and is undoubtedly far more imposing than the original, check out how easily he fills up an entire doorway –

I really enjoyed the scenes that took place during Micheal’s time in the asylum; it did a great job of showing him slowly disconnecting from reality and retreating into himself. I really liked that it was established during Micheal’s escape from the asylum that regardless if you’re nice to him or not he will kill you which is shown particularly well with Danny Trejo’s character.

Finally, as a fan of some of Rob Zombie’s other movies (House Of 1000 Corpses, The Devils Rejects) I’m aware that he has a tendency to go for shock value as a director/writer with large quantities of blunt language and blunt gore. In my opinion, at some point in Halloween it goes a little too far in attempting to shock the audience with these techniques. The gore effects while impressively done are way too excessive. The language used feels forced and at times is almost unintentionally funny. A scene that comes to mind is when two of the asylum’s workers take one of the female inmates into Michael’s room and begin to take turns in raping her in front of Michael in some attempt to get him to react, it just felt really forced as if the movie was trying its hardest to be shocking but without any real substance.

I’m not sure why exactly but on three separate occasions Michael murders half/fully nude teenage girls. Why are so many of the female characters portrayed this way? One of them is meant to be looking after a young girl but instead sneaks off to get it on with her boyfriend, and we’re supposed to like these people why?

Rob Zombie’s Halloween is an entertaining movie from start to finish that’s for sure. The overall look and tone of the film is dark and a real treat for the eyes, if you’re a fan of his other work then you won’t be disappointed in that regard. The gore effects while insanely over the top are highly impressive and there are some decent kills to be seen. Unfortunately though, Rob Zombie’s Halloween fails to bring anything new to the table other than giving us a much more human Michael Myers and by doing so ends up making him much less interesting and certainly less scary. The original Halloween is a horror classic that lives long in the memories of those that have seen it and will continue to be seen again and again by new audiences and old, while I do like Rob Zombie’s Halloween there is no doubt that the same cannot be said.