The 1980’s was an era that saw many a movie make its way into the 3D realm. Many where sequels to already well established franchises such as Amityville 3D, Friday the 13th: Part III & Jaws 3-D but there were the occasional stand alone attempts that looked to cash in on the fad.

Parasite was one such movie…

Directed by Charles Band who is the owner of Full Moon Pictures & creator of the Puppet Master franchise, it also stars Demi Moore in her first major film role. There was a lot to get excited about here!

In the near future of 1992, the world has become a desolate place after some form of nuclear war took place. Dr. Paul Dean is forced to create a parasite that attaches itself to the host & drains them of their life. His captors are the Merchants, a group that have risen to power in place of the American government.

Dr. Paul manages to escape with the parasite he has created & goes on the run desperately trying to find a way to destroy it. Unfortunately for the good doctor he has a parasite inside of him & a Merchant bounty hunter is on his trail. 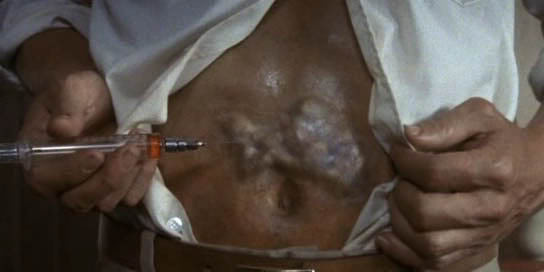 While taking some time to relax at a shanty town he is attacked by a group of punks (straight out of the Warriors) who steal the canister that holds the parasite inside. Can you guess what they decide to do?

The actor, Robert Glaudini has a constantly perplexed look on his face, like he’s not sure just what is going on or how he should be reacting. Demi Moore out-acts him easily even if her role is hardly one that will be remembered.

The really memorable role is the one of Miss Daley, the owner of the hotel that Dr. Paul stays in. She is a little bit cheeky & a serious horn-dog. It’s hilarious mainly because of how little reaction she gets from Dr. Paul. She throws herself at him, suggesting that he can pay for his stay with ‘other’ services & all he can think about is playing with his parasite!

The rest of the cast are forgettable with paper-thin characters (the female punk is just there to show of her boobs) except for Ricus, the leader of the punks who actually has a bit of a backstory involving the Merchants!

Parasite’s effects are a mixed bunch, the parasite itself doesn’t look great but there are moments that thrill (such as the full on body escape early on in the movie). It’s not particularly gory but the sight of a large worm like parasite chewing into flesh might leave you feeling a bit queasy.

Where Parasite really excels though is with its 3D camera work. Now this wasn’t seen in 3D but like always it’s easy to see where those moments would have been. In the 80’s & early 90’s all 3D effects inevitably were just things being pointed towards the screen. In Parasite that is exactly what you get but with some nice slow motion & interesting angles added. It makes it look so much more professional which for a film this cheap really adds a lot to the overall quality.

Parasite is let down by it’s boorish location, terrible lead character, irrelevant plot points & abrupt finale. It could have been a monster movie to remember but instead it just joins the list of bad 3D horrors from the 1980s.