Once again we find ourselves at the final Friday the 13th movie & once again it isn’t. Although credit has to be given for trying to stick to the title, The Final Friday as there was 8 years between this & Jason X.

Jason goes to Hell opens like most Friday movies with no explanation about how Jason is still alive. This is particularly confusing if you remember the ending to Jason Takes Manhattan where he was drowned in toxic water & reverted back to a boy…a seemingly dead boy.

A woman has returned home at Crystal Lake & takes a shower; it’s a convenient moment to throw in some nudity very early on. Quickly the power is cut & she is under attack from a new looking Jason. His mask looks fused to his face now & he has bulked up even more. It’s a good look.

Jason pursues her & just when he catches her…floodlights come on! Yes, something different is actually occurring in this film. Jason has been led into a trap & is attacked by a large number of FBI agents who pump a lot of bullets into him before blowing him up.

I was quite surprised; I mean they blow him into pieces! How the hell is he coming back from that!? Silly me… 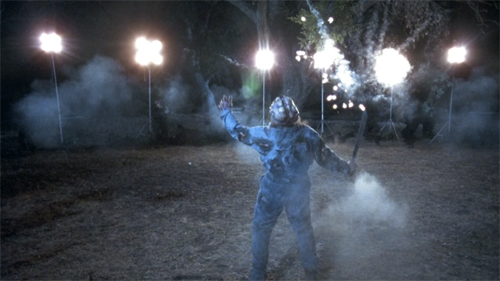 Jason’s body bits are taken to a local morgue for autopsy where Jason’s heart is revealed to still be beating. The coroner is overcome by something & eats the heart becoming possessed by the spirit of Jason. This guy I referred to as Dr Jason.

In this new body his killing spree begins anew killing the police guards after they say some nasty things about Jason’s toughness before killing a group of teens having sex in the woods. The gore is really turned up here as he literally splits a woman in two. The 90’s were a glorious time for blood & guts.

Wondering where this is going? So was I but thankfully we have Creighton Duke, a bounty hunter out to finish Jason off, who happens to know exactly what Jason’s plan is. It seems as though Jason wasn’t an only child…he had a sister & he plans to turn her to the dark side unless Luke joins…wait, sorry, wrong film. Man, I wished I’d watched Return of the Jedi instead; even the fucking Ewoks are preferable to most of this film!

Anyway, Diana (his sister) had a daughter (Jessica) who has a baby. Jason plans to be reborn through one of them but conveniently it’s only a Voorhees that can truly kill him!

Jason plans to kill Diana & Jessica before using the baby to be reborn. At this stage in the movie I was incredibly bored; it lacks excitement or tension while being overly complicated. With Jason possessing the coroner followed by a police man (Cop Jason) followed by a TV reporter (TV Jason) it lacks the excitement that normally comes with the arrival of the masked menace.

It’s just one big chase movie with Creighton Duke there to fill in the blanks. The dude is really under-used as he is one of the better actors but lack of detail about his history with Jason & his motivations means you won’t care when he is bear-hugged to death.

The whole Jason soul transfer thing seemed a bit silly (a black worm thing coming out of the mouth into the other) until we finally see what happens to the body that has been abandoned by him. This was one of my favourite scenes in the entire movie as the body begins to melt & dissolve…it looks amazing! 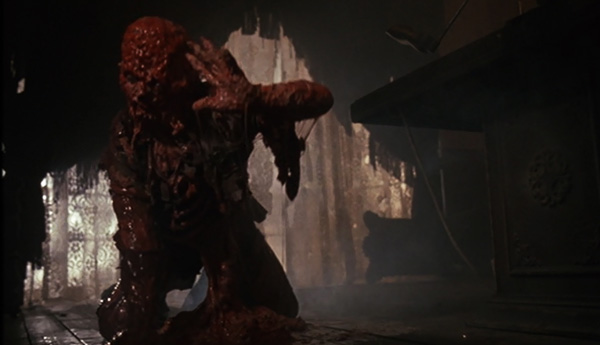 The final 20 minutes are when things finally pick up with the number of gory & nasty deaths increasing. Someone gets their brains squeezed out of the top of their heads while another get their head plunged in deep fat fryers. It’s great stuff & helps keep your attention as we move to the finale.

After killing Jason’s latest possession a baby Jason crawls out of his neck & finds Diana’s body in the basement where he is finally reborn. Jessica, having been given a magic dagger by Creighton Duke manages to stab him with it.

This causes all of the souls Jason has accumulated over time to be released & hands drag him down to hell. That’s our movie! Jason is in hell & a final shot of the mask reveals it to be empty…until Freddy Kruger’s gloved hand reaches out & grabs it. Brilliant surprise ending!

You see the plan was to do Freddy vs Jason as early as the 90’s but issues arose that meant it wouldn’t happen for another 10 years. 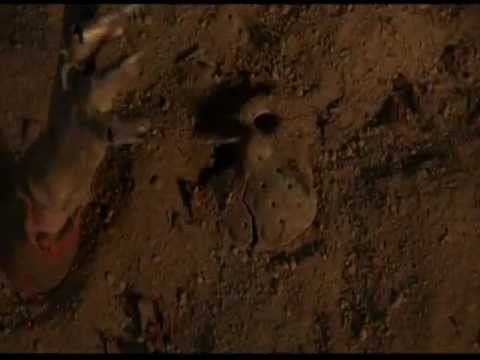 So the one & only Friday the 13th movie made in the 90’s goes out with a bit of a bang even if most of the movie is boring as hell. You see the whole soul transfer thing is just too much, it’s nonsense which is saying a lot for a series like this. Without Creighton Duke I don’t know who would know what the hell is going on, large sections of the movie are dedicated to him explaining it.

Most of the actors do a serviceable job in their roles but the most enjoyable thing about this movie is the gore. I never thought I’d say this but…not enough Jason!

9 down 1 to go, the series lasting this long is amazing…I’m blown away that audiences kept coming back & studios kept fronting the cash!