Things have taken a turn for the worst in the Friday the 13th series; Jason has had enough & needs a holiday. However if the opening shots of a run-down Manhattan are anything to go by I would probably avoid going there.

Funny thing is the movie does for most of it, regardless of the title not much of this is actually set in the city. 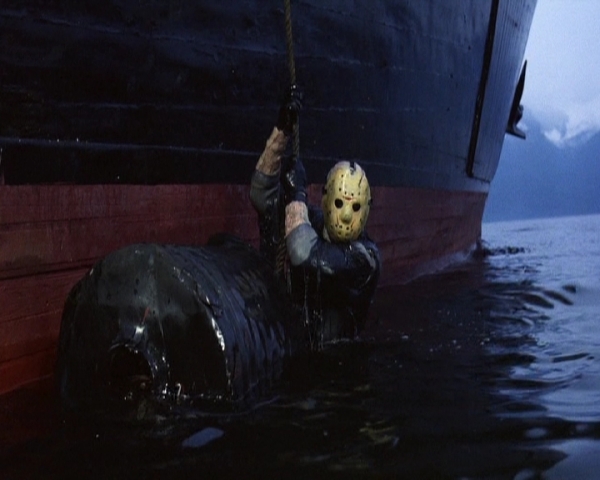 Starting with 2 teens on a small houseboat doing what most do in a Friday movie, have sex & exchange awkward dialogue. The boy tells the story of a young Jason drowning in the lake below them (the shots of the event though are confusing as the boy drowning doesn’t have a facial disfigurements & looks like a normal child). Attempting to scare his girlfriend he lowers the anchor & dons a hockey mask like Jason wears. The anchor gets stuck on an electrical wire running through the lake before coming to rest on the partially covered Jason.

It creates an electrical spark that once again reanimates the killer who escapes the lake & climbs aboard the boat. Finding the mask he puts it on & promptly kills the pair. It has to be said that Jason’s look is still really good, it doesn’t quite fit with how you looked in the last but I can forgive that in a series filled with errors & poor continuity.

The two kids Jason killed were due to meet up with a bigger group of kids on a graduating cruise. The SS Lazarus is due to cast off as the boat arrives at the dock with Jason on board. He sneaks onto the cruise ship & off they go!

A bit more effort is put in to try & flesh out the different characters but they’re still all cardboard cut-outs based on their actions, names don’t mean a thing. The female lead seems to have a backstory regarding a fear of water & a drowning of a young boy but it’s not made clear until the end.

Anyway it’s not long before Jason is killing them aboard the ship anyway. It’s unclear exactly what his motivation is here? I mean why did he even leave Crystal Lake? A creepy deckhand tries to shed some light on it with a pointless rant about Jason finishing the job. It makes no sense, is never resolved & his lines are so poorly delivered you won’t care through the laughter.

Regardless his killings don’t take long to be discovered & after he sets the engine on fire the few remaining survivors take to a lifeboat (should be worth noting that Jason was good enough to pull a fire alarm though – safety first!). At this point the movie is 50 minutes in & we are nowhere near Manhattan… 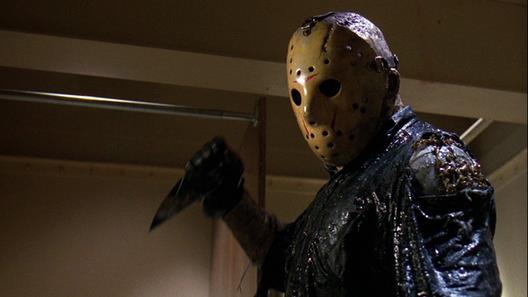 The survivors manage to make it to Manhattan in the rowboat & arrive at a seemingly un-used docks area. Jason who appears to have swum is shortly behind them, guess he learned how all that time sitting at the bottom of Crystal Lake.

We get a brief moment of humour as Jason appears confused by a giant ice hockey mask that resembles his own but it’s not long before he is hunting down our survivors throughout the docks. He’s not their only problem though as 2 minutes after landing they are robbed at gunpoint & our visionary girl is dragged off to be raped.

Thankfully our hero Jason stops the potential rapists before they can start their act & she escapes. What follows is possibly my favourite death in any Friday the 13th to date as Jason enters a boxing fight. There was never any question that he would win but I had to applaud his one punch, head knocked off clean approach! Rocky wouldn’t have stood a chance!

Finally the visons are explained as we see that she met the young boy Jason (who now has a deformity although still not as severe as the past films) while being taught to swim in the worst way possible, thrown into a lake & told that if she doesn’t learn the dead boy is going to get her…no wonder she’s scared of water.

Jason continues to pick them off leaving just two who escape into the subway. This is quite a fun sequence as the arrival of Jason on a busy train doesn’t cause even a stir from the tired & miserable passengers. It seems far less American & more the London way, eyes down…no talking.

With less than 15 minutes remaining of the movie we finally arrive at the busy centre of Manhattan. Jason has finally arrived & can start enjoying his holiday but first he has to just deal with these pesky kids.

Thankfully they find their way to the sewers, a convenient place that is flooded every night at midnight by toxic waste. Jason should probably not add this area to his ‘places to visit’ while on holiday here but he follows them anyway.

Seriously, this movie was the worst advert for Manhattan in the late 80’s.

The resulting chaos that occurs in the sewers does give us another real face Jason moment but it is terribly comical & hard to take seriously. I don’t know why they went with that look but it is so stupid.

In fact the entire ending is just stupid…considering what has occurred over the last 8 films that shouldn’t be a surprise but it is. Jason drowns in the toxic waste (I thought he was a zombie?) that looks a lot like water & when it recedes his body is of a little boy.

Why? Who knows & who the fuck really cares at this stage? 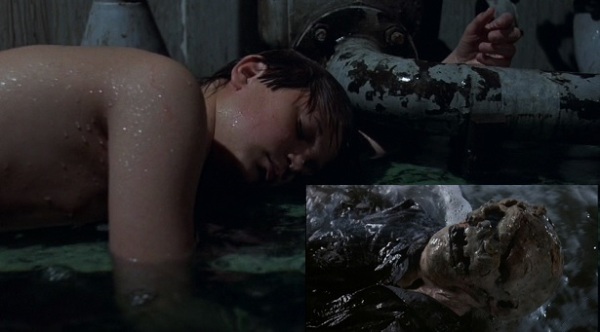 Wow…the series has hit a new low with very little redeeming factors to enjoy here. Normally I would get a kick out of the deaths but other than 1 or 2 there isn’t much to get excited about. This was once again another Friday the 13th that was supposed to end the series. Funny, the next one is supposed to do that as well.