Ah, the video nasty list, a list that any self-respecting horror fan should be aiming to work their way through eventually. A list of movies that were decided (by those not in any position to judge) to be morally wrong & dangerous for society. Not all were banned in the 80’s & many were just heavily cut.

It says a lot about progress that most of these movies are freely available completely un-cut these days & are often celebrated for what made them notorious. Island of Death is one such movie that can be viewed in all its’ awful glory. It’s a movie with goat rape, loads of sex, homophobia, racism & some fairly nasty deaths. Enjoy…

So Christopher & Celia seem like a nice, normal happy couple planning to enjoy their holiday on a small Greek island. They explore, get to know some of the quirky inhabitants all the while taking pictures of their exploits. So far, so normal…

Turns out that the pair are a bit mental & enjoy nothing more then a bit of sex & murder. Their sadism is matched by their belief that they are on some sort of Christian crusade to rid the world of sin. They are laughably hypocritical but that makes it all the more compelling to watch.

For example, after a local flirts with Celia, Christopher gets her to have sex with him while he takes photos from a distance. His clear enjoyment turns to rage & attacks the man crucifying him before pouring paint down his throat. Nasty…. 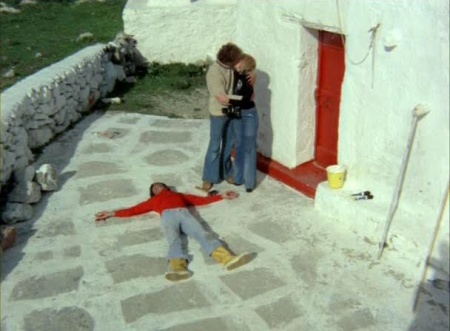 That is but one of the many nasty moments in this movie. By today’s’ standards they are quite tame & at times look so fake (keep an eye out for the stereo-typical black cop who gets thrown out of a plane with a rope round his neck – it is clearly a dummy). One of the most notorious moments sees Christopher’s advances on Celia rebuked so frustrated he goes outside, finds a baby goat & promptly rapes it before cutting its throat.

It’s moments like this that do shock as they are unexpected & in stark contrast to the idyllic locations. These shock moments happen a few times throughout but sometimes stray into more amusing territory although I doubt that was the intention.

One such moment sees Christopher about to bed down with an aging woman when he decides to urinate on her. Her reaction is one of enjoyment though & he is enraged by her perversion (I know, he’s an idiot). The end result is a decapitation with a bulldozer…

Sadly where the film is inventive with its deaths it falls horribly flat everywhere else. The acting is horrible by everyone but none more then Celia who is as lifeless as plank of wood. Funny enough she hasn’t acted past 1978… 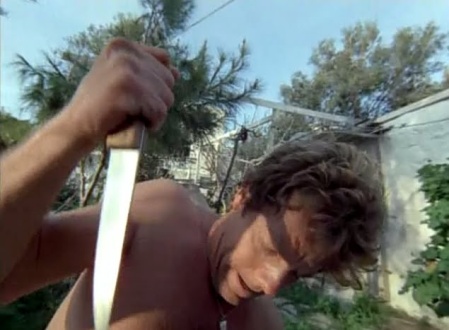 The dialogue is a source of constant amusement & is cringe-worthy at best. The gay characters have some of the worst of it & are as stereo-typical as they come. I can put up with all of that but what i can’t put up with his the loud & obnoxious music. It is played constantly over important scenes & really loudly to the point of irritation.

There is little gore even if some of the murders & deaths are quite hardcore. The worst most likely being the burning of a gay woman’s face off & while there is plenty of nudity its 80’s style of soft core (if you’re wondering what that means just think – bushes & very few naked dudes, only ever naked women).

For having some inventive deaths that are borderline brutal at times as well as some unexpected moments Island of Death deserves a watch. It’s badly acted with awful dialogue but if you can get past the irritating music & lack of gore then you might find yourself enjoying this more then you expected.