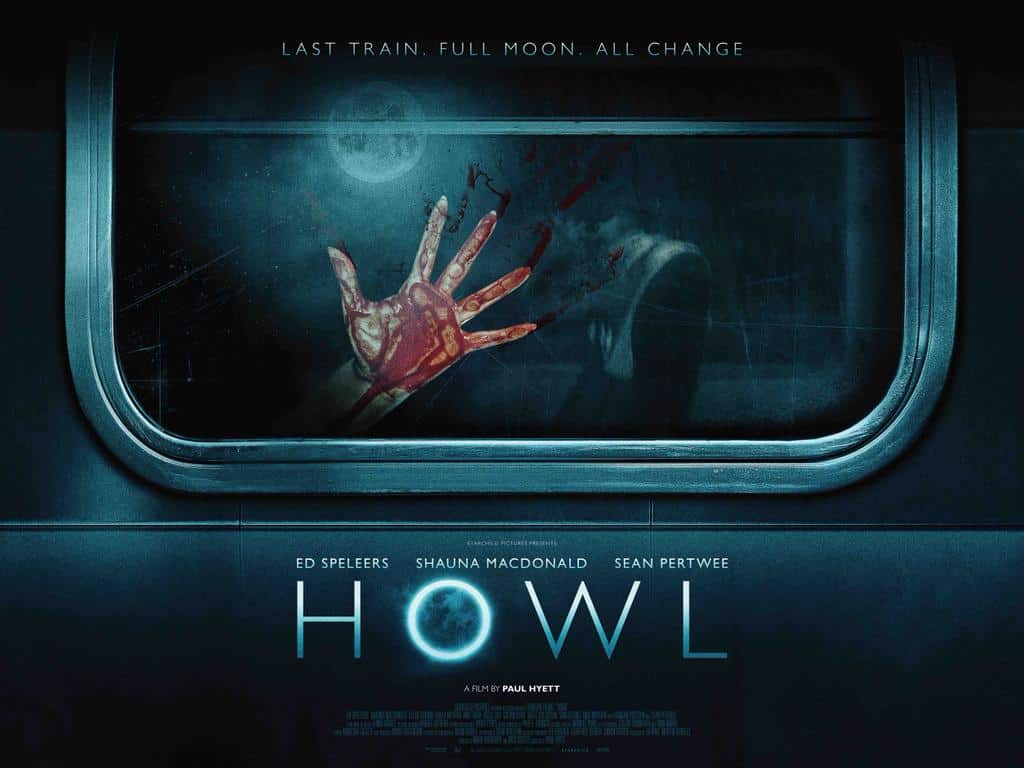 My least favourite genre of horror are werewolf movies, they are so limiting & rarely entertain. There just isn’t that much that is scary about a werewolf & often the best tact is to go for a more tongue in cheek approach (An American Werewolf in London/Dog Soldiers).

Howl looks to change that with a story based more around characters & their survival as they come under attack from werewolves while travelling on a late train night service from London to Scotland.

Joe is a train guard recently rejected for a supervisor position & feeling a bit down on his luck. His shift is on the late night service out of London & as he makes his way through the carriages we meet all manner of horrible passengers. Anyone that works within that industry can have a degree of sympathy for Joe here.

Alongside Joe & the driver we also have staff member Ellen, who dishes out snacks & food. Joe is in love with Ellen but she clearly doesn’t feel the same way. While talking the train suddenly comes to a juddering halt in a remote forested area. It seems as though something is on the track & the driver needs to investigate.

Tony, the driver (Sean Pertwee in an absolutely wasted role) gets out of his cab to find the body of a deer on the track; he is than killed violently by something unseen. With the train not moving, the driver missing & the passengers getting quite irate it’s up to Joe to try & find out what has happened but it’s not long before the train & its passengers are under attack from the creatures outside.

I had high hopes for Howl but ended up disappointed…again. The biggest problem lies with the villains of the piece, the werewolves. Now I quite liked the idea of making them less based in fantasy & going for a more realistic approach, kind of like a mutation but the end result is laughably poor. They spend far too much of the film teasing the survivors when it seems as though they could rip through the train at any point.

You won’t get a good look at the werewolves until near the end of the movie & for good reason. In the end I wish I hadn’t as their deformed hairless bodies’ just look wrong for the level of chaos they’ve caused up to this point.

A scratch or bite from one of these creatures sees the person infected but it is more reflective of a zombie infection. It spreads quickly & but instead of the infected mirroring the creatures outside they seem to only grow sharp claws & big teeth. The scene in which the old lady who has succumbed to the infection terrorises the survivors is hilarious, she looks so stupid.

Some great acting helps rescue what is a boring movie a lot of time. The characters of Joe & Ellen are interesting even if they are predictable, un-requited love in a horror movie tends to result in either moments of heroicness or comedy cold, sadly it’s the former here. The rest of cast are decent but terribly unlikable at first. It makes it hard to connect to most of them when they decide to band together for survival.

My favourite character though was Adrian, the charming bully of the group who cares only for his survival & to hell with the rest of them. The scene where he kicks one of the women off the train into the waiting arms of a werewolf had me grinning from ear to ear.

The ending is groan-worthy stuff as the hero gets to save the day (kind of), rescue the girl & the bad-guy gets his comeuppance.

It also manages to create a massive issue:

The werewolves are still out & about during the day. The forest is brightly light & they are still hunting. I get that it’s less traditional & more infection style but why put so much emphasis on the full moon? The more you think about it, the less this movie resembles a werewolf movie.

Very disappointing but not without good moments, the cast do well & the gore flows nicely. It’s just a pity that the creators didn’t embrace werewolf lore & go for a more entertaining & less serious movie.