Flesh Eaters from Outer Space (originally titled A Taste for Flesh & Blood which I much prefer) is a low budget B-movie horror that will offend through its sheer awfulness. Is it gory? Yes but that’s about all you can enjoy in this chore of a horror flick.

A strange craft is spotted orbiting earth & a shuttle sent to intercept it. The astronauts investigate the alien ship & are promptly killed leaving one guy (David) alive who returns to earth with an alien aboard. Back on Earth the alien escapes killing everyone in its path. 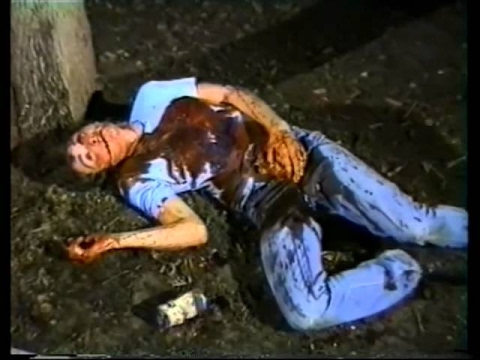 The military try to find out more from David & lock him up in the meantime. As the alien begins to cut a bloody path across the countryside a high-ranking officer realises that it has to be stopped & David might be the only one who can. He secretly releases him, gives him a convenient tracking device & stresses the importance of stopping the flesh-eating alien.

David is a total badass & relishes the mission to avenge his fallen brothers but this task might even be too much for him. While tracking the alien he meets Sandra, a local psychic who has been dreaming of the alien attacks. She is unwilling to get involved though as she has a daughter to protect.

That all changes though when her daughter is attacked & killed while leaving school, Sandra teams up with David to kill the flesh eating alien & save the planet!

So where do I start? When I say low-budget I mean looowww budget. This could have been filmed on a camcorder it looks that bad. The cast are nobodies who can’t act if their lives depended on it. I don’t know whose worse…David’s horrible attempts to come across like a total badass but actually make him look like a rude, arrogant asshole. His inability to take no for answer from Sandra is worrying & he gets a bit hands-on in a local shop. I actually thought he was going to slap her at one point.

Sandra though this somehow worse, barely able to express an emotion that isn’t anything but dumb surprise. Her daughter gets brutally murdered & you wouldn’t know she gave a damn after 5 minutes. I’m not saying she has to be weeping the entire rest of the movie but she could at least act like it affected her!

The alien is an over-sized costume that looks more like the creature from the black lagoon. Images are fleeting & it is kept in darkness for the most part. Every attack has this repeating shot of its face up close with this irritating noise it makes. By the end of the film that noise will be the only thing you really remember & you’ll wish you didn’t.

Stupidly the huge alien is able to sneak up on people too, it makes no attempt to conceal itself or move stealthily.

The gore flows as you would expect in a movie like this as people are slashed by its claws & devoured in a bloody mess. It’s the only real highlight of the movie even if far too many deaths happen off-screen.

Probably best you avoid this one.