Starting off almost directly after the last movie, a local man uncovers the bodies of the adults murdered in Gatlin. The surviving kids are treated with care as they are thought to have been under the influence of the Isaac, the boy preacher from the first movie.

The people of the nearby town, Hemingford agree to adopt the kids to help them get over the trauma. Not everyone is convinced of the children’s innocence though…

Meanwhile hack reporter, John & his teenage son Danny are on the road looking for stories. John & Danny clash a lot on their journey but end up stopping at Hemingford after hearing about the kids from some rival reporters. John sees a story in it & after telling his son not to get involved with anyone proceeds to get involved with the local bed and breakfast owner.

Danny rebels (“I gotta tell ya bub!”) & ends up hooking up with local orphan, Lacey.

Elsewhere the surviving kids are still trying to continue on with the teachings of ‘He Who Walks behind the Rows’ but their faith is beginning to waver. That is until group leader, Micah, is possessed by the entity & encourages them to continue what they started.

The kids start knocking off the adults while standing in groups & being creepy…you know how this goes. John continues to dig for a story & ends up uncovering a subplot involving poisoned corn!

It’s not a bad Children of the Corn movie by any stretch but it does lack imagination. The story is not unique & loses direction quickly…the children’s behaviour would cause any adult to raise an eyebrow but these adults seem oblivious to everything.

There are moments of black comedy that just fall flat…I don’t know what they were thinking but Children of the Corn movies don’t exactly make you laugh…at least intentionally.

Most of the deaths are drawn-out affairs as well although praise has to be given for 2 in particular…the nose-bleed scene in the church is incredibly gory & out of place to the rest of the movie. The other is the final death of the movie & involves a harvester & a body being pulled into it. Nice!

Those effects look great but there are many others that look terrible. For some reason we get to look through the eyes of He Who Walks Behind the Rows & it turns out that it has Predator vision. It also turns out that Native Americans know about the entity & of course, only tell people when they need to know…. 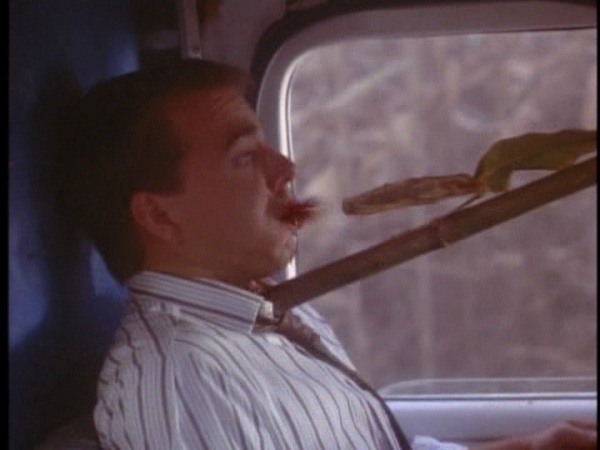 Anyway, the movie stutters along as the last of kids kill the adults in a variety of ways (all while adults wring their hands saying Lordy, Lord…what is going on in our little town!?). They not a convincing bunch at all but nothing in comparison to John & his son who just stink up the screen every time their together.

Their supposed father & son relationship, strained or not, is unconvincing & the road to redemption pointless. I didn’t care if they reconciled through adversity, I wanted to see them both made into harvester fodder.

Not going to go down as one of the best Children of the Corn movies or one of the worst. It has moments that are worth watching but as an overall package feels unnecessary (don’t they all?) & padded out.

Children of the Corn II: The Final Sacrifice