I don’t mind a bit of ska rock but I have never really listened to an awful lot of it or become a fan of Less Than Jake. There is no real reason for that, just one of those bands you sometimes miss, but with tickets for this show being sold for a tenner and there being multiple bands, well, why wouldn’t you go? In fact of the five acts playing at Brixton Academy, I have only heard of Less Than Jake and may not know a single song from any of them. This could be bad…….

So it is a Thursday night in Brixton and most people are arriving after a hard days, or at least a days, work. Doors open at 18:00 though I didn’t arrive at the venue until just after 19:00. Thankfully it meant I missed any queuing but it also meant I missed all of the first act and most of the second. The first act was a DJ set performed by Matt Stocks who I know nothing about. A quick internet search shows he is affiliated to Team Rock, as in the Metal Hammer group, so while I may have enjoyed the music he played, I don’t feel like I missed anything as I don’t really see the point of a DJ in a live music venue. Especially as the PA would normally be blasting out tunes before the bands came on anyway so there isn’t much of a difference. The second act on are a Japanese/American ska punk band and are called Kemuri. They have been around for a little while by the looks of things and focus their lyrics on positivity which is a nice idea. I only caught a single track right at the end of the set but it was catchy, full of energy and made me take notice.

The lead singer in particular, Fumio Ito, was dancing like a mad man and it was infectious to watch. I wish I had seen a bit more as I am sure I would have liked it.

After all that up tempo enthusiasm, I was quite looking forward to the next band up. Mariachi El Bronx are actually a side project from a rock/hardcore band called The Bronx. The difference being that when they play as their alter egos, they play Mariachi music. They came on stage to rapturous applause and I quickly realised they were very well known and very popular. The band, which were about 9 members strong, started off with their Mexican inspired music and it was really catchy but then problems started. At least from where we were sitting, whenever the horn section started up, the rest of the band was completely drowned out. I could see a violin being played but I couldn’t hear it just like I could see a guitar being played like it was muted. The horn section was so deafeningly loud, it was, at points unlistenable. When the horn section quietened down for a bit, the music from the rest of the band was fun and energetic but that led to another issue. The singing. While the singer, Matt Caughthran, had a nice voice and was very able, the singing was slow and drawn and seemingly at odds to the energy from the rest of the band. 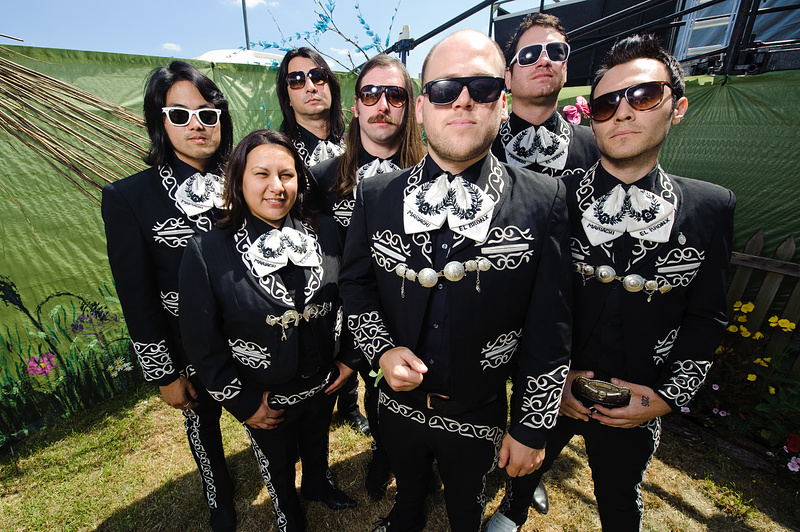 While I have no doubt that as a band they may represent Mariachi music brilliantly and are exceptionally talented as a group, I felt that the energy gathered by Kemuri in just the one track I heard was drained by Mariachi El Bronx and I was pleased to see them leave the stage. After this I must admit I was a little concerned that the next band may leave me in tears as they were a reggae band called The Skints and I don’t really like Reggae music. They are from London though and I am willing to give most things a try, especially when I have already paid for a ticket, and I am glad I saw them. The Skints managed to be quite enjoyable. Seeing them play their style of music was a first for me and I was impressed with how talented they are, how much fun a lot of their tracks were and how good with the crowd they were. 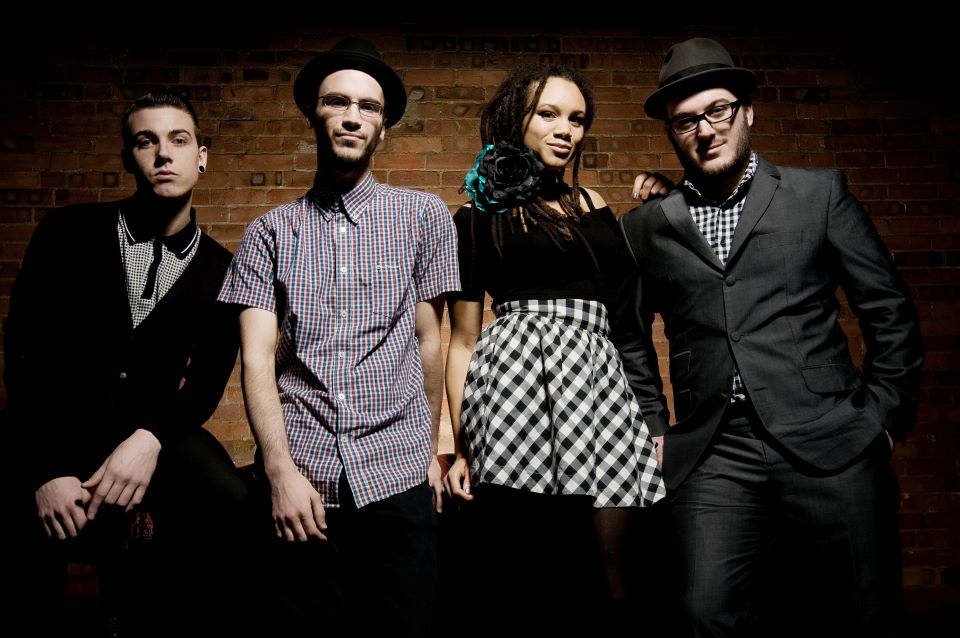 Playing music to dance to, not to headbang to, they rattled through track after track keeping the crowd engaged with banter and looking like they were having a great time. It probably helped me in that there were slight cross over elements into other genres including rock and punk with some turned up guitar work too but I was really impressed with the immense talent of Marcia Richards who as well as being a lead vocalist, played keyboards, samplers, the flute, the alt saxo and what appeared to be about twenty other instruments. I imagine I was behind her in the evolutionary queue where talent was doled out and they had ran out of any for me.

Thanks to The Skints, the energy in the room was back up to max in time for the main event, Less Than Jake. Not knowing the band well myself, I was a little surprised by how much anticipation was building in the crowd. They are obviously popular and that should surely bode well for the show I am about to see. The band arrive like a whirlwind of energy, running laps of the stage and building the crowd up into a frenzy. They burst straight into song with Last One out of Liberty City and have the whole crowd going mental. They really do pack a punch in regards to energy. Not being a fan, I wasn’t familiar with any of their songs as they announced they were planning to play a lot of old stuff tonight. While that pleased a lot of people, there were also others who wouldn’t have minded some of their more recent stuff too. Lead singer, Chris DeMakes works the crowd with decent banter though I must admit I find his voice a little boring. It works for the band and it works for the songs though I guess. As they worked their way through tracks such as Overrated (Everything is), Five State Drive, Sugar in Your Gas Tank and Happyman, I must admit also to finding it all sounding a little messy when all the instruments went for it at once though. I guess maybe that is one of the things with this sort of music so when guitars, drums, vocals, bass, saxophone and trombones all blast at the same time, it can sound a little incoherent live. Still, a minor complaint as the band continue to have a lot of fun and keep the crowd involved.

Less Than Jake throw everything they could, literally, at the Brixton crowd with cannons shooting tissue and streamers at the crowd, fans being invited on stage for a drink and a dance and their cartoon/puppet character (I don’t know what his name is) running about on stage too. More well received tracks keep the momentum moving with tracks such as History of a Boring Town, Good Enough and Gainesville Rock City all getting an airing to bring the band up to a close. Weirdly, thinking back, I think I find myself enjoying the band more when their second singer and bass player, Roger Lima, takes over duties which kind of reminds me of how I feel about Blink 182. So, with the band now done for the night, we get a nice little piece of nostalgia in a crowd actually chanting a band name and forcing them back out for an encore rather than all just standing there and expecting it. The band listen and come back out for another three songs and the crowd show their gratitude by being louder and more raucous than even before. The Rest of My Life is played followed by Look What Happened are played before finally, the last song of the night is one I recognise and now know is called All My Best Friends Are Metalheads. The band finish for good this time with fireworks, streamers and party poppers going off everywhere and both they and the fans look like they have had a blast. Great energy, okay songs but wonderful fun.

So that brought the night to a close. I got to see a collection of bands I have never seen before, some I don’t want to see again and some I would be happy to see more of but overall I think Fireball have pulled off a great little show here. Less Than Jake were the star but then they were meant to be. Their energy and ability capped a really fun night, despite my fears before the show. The Skints will also live in the memory for a while showing me something I haven’t ever seen before. Making our way back out on a warm night in Brixton, the one common thing I can see on everyone’s face around me is a big beaming smile and isn’t that what music is all about.