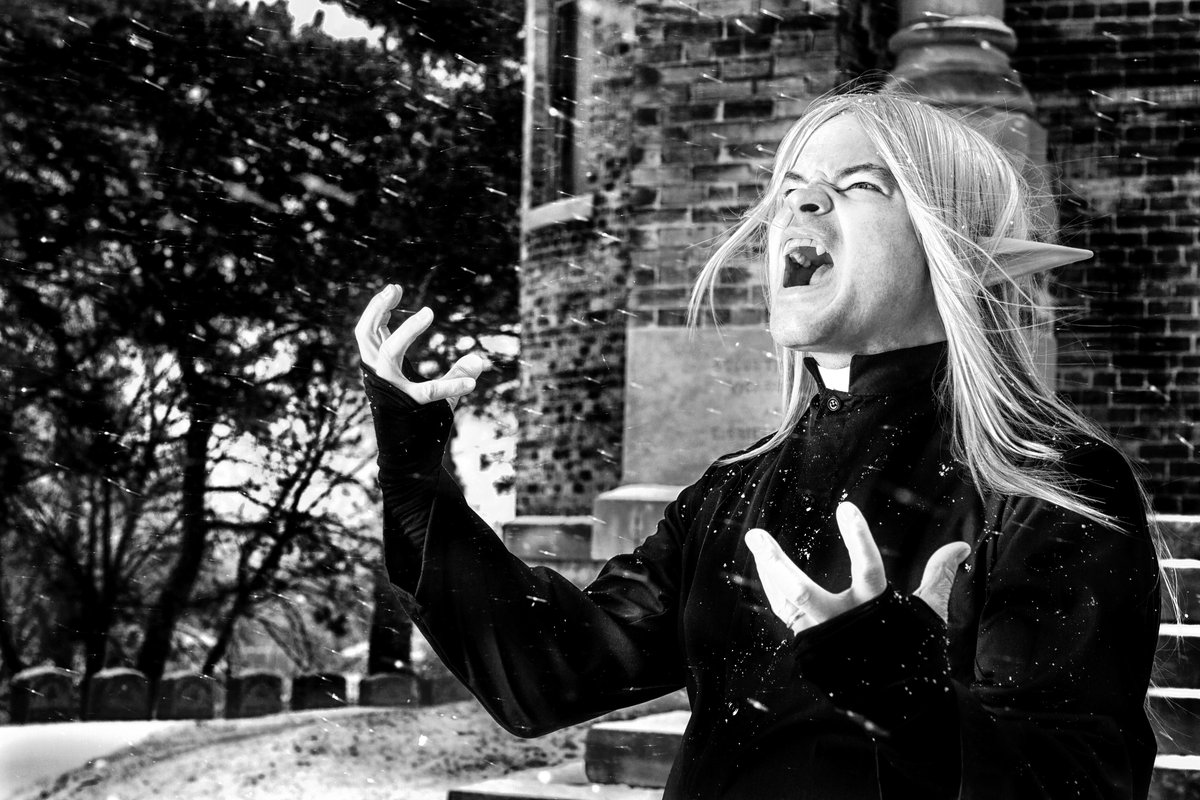 The character Unearthed Elf is some kind of cursed elven vicar of doom from the Shadow Realm. An entity from the netherworld that exists in the shadows. An antihero in the underworld dimensions. Keith claims to have seen this character in a vision while looking into a mirror in a strange old abandoned house. He felt a strange calling to become this entity in real life, and have it be a singer in a metal band. Many of the lyrics are based on visions and dreams that occurred during this time period.

The result is distinct brand of “old meets new” epic fantasy doom metal that is melodic, catchy, fun, and ideal for headbanging.

If you’d like to read a review of the excellent debut album, Into the Catacomb Abyss you can do that by clicking here. We here at Games, Brrraaains & A Head-Banging Life were lucky enough to be granted an audience with the mysterious wanderer.

1. We are fascinated to know just what has brought you to our world. Why now?

My dearest friend… Seven million years have passed. This is the time it takes for an element such as The Necrosteel to be forged. Through the incantations and opening of portals in your realm I have finally been summoned to continue this eternal quest for steel. The silence must now be broken on this path of vines, thorns, and oxidized wrought iron that is our lives and our story.

2. As this is our first journey into the catacomb abyss, what can we expect?

O my fellow wanderer to The Abyss… A mighty and epic conquest awaits thee on this journey to the deepest dimensions of a world where few may tread. It shall be known that thy path may be fraught with the largest and most ornate underground passageways and cathedrals, the emptiness of the void far below as we ascend to the moonlit Shadow Realm, bombastic volcanoes of pure doom where gauntlets are forged, cobweb-laden mausoleums in which an ancient spiral staircase leads you to the largest most cavernous catacombs, buried pyramids and tombs of absolute cursed dangers, and long-forgotten landscapes of arcane mystery and wonder.

3. Who or what would you say has influenced the music you’ve created?

When you walk through the oldest cemeteries in your realm, listen beyond the silence and you will hear the stories they tell; the whispers on the wind, the soft song of sorrow, the excitement and energy that permeates the atmosphere as nightfall draws near. See the inscriptions carved in stone, hear the voices of the statues. Yearn to be free, embrace the night and ascend to the starlit sky.

4. Are we going to hear from you again in the future? Are you planning to visit other lands & play your music to weary travellers?

The Catacomb Abyss is an unthinkably enormous and complex structure. Not all of it dwells within the same plane of existence. There are many twists & turns. The quest is not over, even once The Necrosteel is acquired.

5. What does the Unearthed Elf do when not singing tales of the catacomb abyss?

Regenerating on the Plane Of Elemental Air.

6. Finally, just what is the Necrosteel?

Thou speaketh of The Necrosteel! It is an element forged in dragon’s breath, infused with wyvern poison, and quenched in the sorrowful tears of the dead. Surely using alchemy may we craft something truly powerful from it, don’t you think?

If you’d like to know more you can check out the Unearth Elf website or visit the Facebook page. You can pre-order the album now ahead of it’s October 31st 2016 release. Just click on the link below.

Pre-order Into the Catacomb Abyss.