“The Lord won’t betray you, he’s the best”

One of the more famous ones that is still banned in the UK is The Beast In Heat also known as SS Hell Camp. Utterly devoid of anything resembling entertainment, it quite simply is one of the worst movies to ever be made.

Set in a small rural town in, it tells the ‘story’ of a group of Nazis coming under constant attack by rebels who are part of the local townspeople. Dr Ellen Kratsch is called in to try & root out the conspirators after they blow up an important supply route. She is experimenting on men, creating man-beast hybrids, allies to the Nazi army that will have no fear & feel no pain.

One such experiment has created ‘the beast’ who is like a wild animal. To encourage him Kratsch feeds him aphrodisiacs & gives him young females to have his way with.

Looking to find out just who the rebels are she orders her men to go to the town & capture all the young women. Her plans are to torture them to make them give up their men & her methods are very, very unusual. 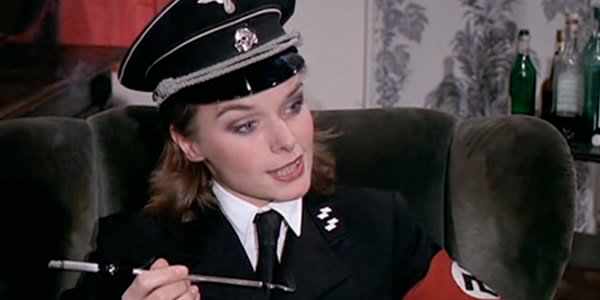 For the most part not a lot happens throughout this horrible movie. It’s incredibly boring with badly dubbed conversations. There wasn’t even an attempt to match up lips to words & often characters mouths are still moving seconds after the words have ended.

Add the shoddy editing & camera work, the terrible lighting, the overall cheapness & what you have is a nearly-unwatchable film.

At first it’s hard to see just why this movie caused such outrage (as is often the case with many on the Video Nasty list) but every so often it will drop in a scene that makes you go ‘ah, that’s why’.

Scenes like the Nazi inserting his pistol into a young girl’s vagina then pulling the trigger. Another where we see electrodes hooked up to another woman’s vagina all in close up (remember this is the 70’s) but probably the worst of the bunch is the scene where the beast rips off clumps of a woman’s pubic hair before eating it.

These scenes are bad, pointlessly designed to shock & offended but that in itself isn’t really the big problem. Sexualised violence wasn’t new but here they often go on for such a length that it will start to make you uncomfortable. Listening to the beast grunting while he rapes a women who screams non-stop for minutes at a time is just awful.

Take all of this & mix in the Naziplotation & it actually becomes quite clear why it was banned. Should it still be? On the imagery alone…no. However it’s such a terrible movie it really shouldn’t be seen by anyone.

It’s hilariously bad at times but not in a charming way (except the priests dubbed lines, he kills me). It looks terrible & the acting is diabolical. There are a lot of shooting scenes throughout & everyone dies in comedy fashion. No blood, no bullet holes, just arms up & slumping over or in the case of one old lady…lie down carefully.

It’s difficult to see this through to the end but it’s not like it’s worth it!

The Beast in Heat/SS Hell Camp