Four friends are on route to Coachella but decide to stop off in LA to look for satanic stuff. Seth & Elise are a pair of goths who want to experience the occult while Chloe & David are just along for the ride.

Elise in particular takes the whole ‘satanic’ shtick very seriously & arranges for them to stay in a particular hotel room where a woman killed herself. She also drew a satanic symbol on the wall in her own blood before dying. It costs an extra $20 which should be a serious warning sign about the hotel itself.

On their way, they hilariously get lost & have to stop to sort directions out. It’s hilarious because David forgot to turn his sat-nav on. Except a moment before it was directing him perfectly fine. This stop is all so Chloe can see a distant figure high up in a building seemingly warning them to stay away.

Naturally she dismisses it & never thinks to zoom in on the picture she snaps on her phone of the figure.

So as part of their satanic hunt they visit a shop that sells all kinds of oddities but run afoul of the moody owner. Afterwards Seth & Elise decide that it would be fun to tail the owner & see where he goes. David agrees that it’s something to do (in LA they are apparently struggling to find things to do) & Chloe puts up minor resistance.

They follow the owner & witness a satanic ritual that involves a female sacrifice.

They interrupt it, escape but Seth leaves his phone behind. Back at the hotel they receive a call from the girl who would have been sacrificed. She agrees to give them back their phone when they meet up with her.

Seeing that she is homeless Chloe talks the rest into letting her stay with them at the hotel for one night only. Sure, that seems absolutely the right thing to do with a complete stranger. Don’t even worry about the ritual she was part of the night before!

Predictable with some of the dumbest character decisions possible, Satanic thinks it’s way cleverer then it actually is. The acting is decent, in particular Sarah Hyland as Chloe & Steven Krueger as David. The latter of the two seems like your average jock at first but shows a depth that is unfortunately completely forgotten about by time the film reaches its conclusion.

Visually the film has style, it shows a dark side of LA that implies satanic ideologies are just bubbling under the surface. Unfortunately, it constantly drops interesting possible narratives to wrap up a story that no-one actually cares about. 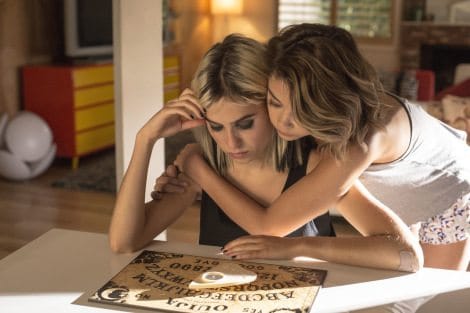 There are no surprises here, particularly as the movie opens showing a scene from the actual end. This new favourite trope of horror writers/directors needs to stop. Let us be surprised by what happens at the end of your movie!

Regardless it’s still basic step by step stuff leading towards a payoff that is boring & confusing. While not completely unwatchable it squanders any & all potential it has by focusing its efforts elsewhere & making the characters an absolute bunch of idiots.