WWE Champions is a combination of the pageantry of the squared circle & the match 3 game system. A system that has seem many a greedy & lazy developer pull in bags of money.

How, you might ask? Well, being a free to play game you jam pack your game with unreasonable amounts of in-app purchases. You make the game seem super-nonrestrictive for the first few hours (in some cases far less). You dish out rewards & prizes early as incentives to carry on playing. Then you up the difficulty factor to such a degree that gamers either stop playing, wait out the lengthy timers or dip into their wallets.

No-one begrudges a developer of a good free to play game getting a bit of cash this way. If they’ve created something that is fun, has plenty of replay value & is an actual rewarding experience then they deserve a return on that.

The problem is often that they are lazy copies of other more successful games but with a supposed ‘unique’ take on it. As if such a thing was possible with a gem matching game. The other problem is the greed involved. It has now become common place for developers to litter their games with in-app purchases that reach up to £80.

Just think about that for a second…£80 for a one-off purchase that still doesn’t fully open the game to you. The items you receive for that disgusting amount will have a finite supply. It won’t seem possible at first but whatever you gain for that amount will go.

It is a system that has proven to be incredibly successful though & I will never understand why. It’s also the system that WWE Champions employs.

The first 2 hours in the game are great as you get to grips with the gameplay & the menus. You’re led by the hand through the modes nicely while unlocking numerous characters for your roster. Wrestling fans will have a wry smile on their faces when they see that the first characters you unlock are The Rock, John Cena & Roman Reigns. Subtle, WWE.

WWE Champions combines a wrestling match with matching gems. You match 3 or more to do moves on your opponent resulting in damage. Match colours associated with your special moves to build them up before unleashing devastating damage. It’s turn based so once you’ve had your moves, your opponent dishes out his. It does a decent job of capturing the WWE action. Linking moves together that results in big damage & swings the match in your direction. 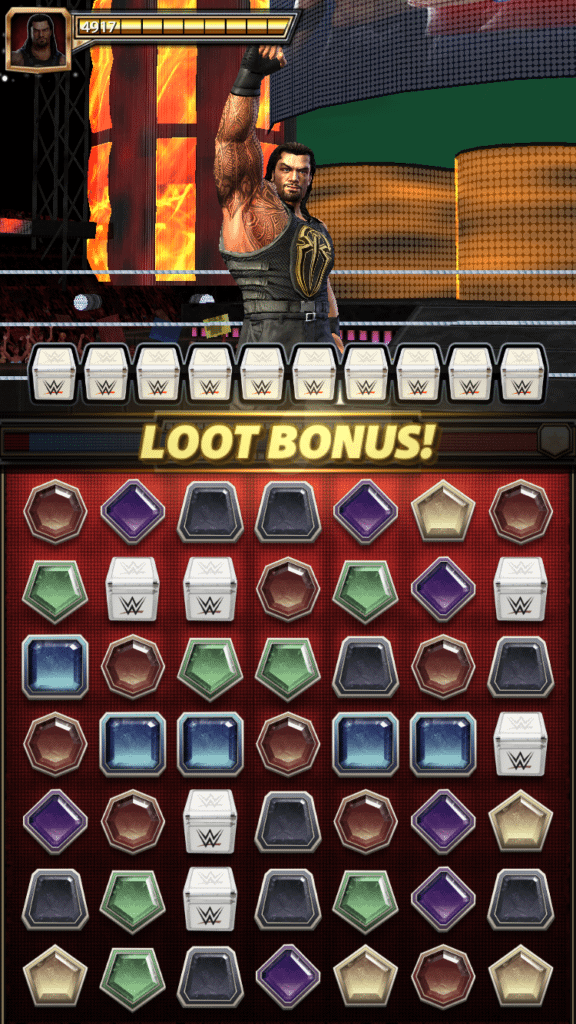 Certain moves allow pins to be attempted where your opponent has to match gems to equal the amount of damage you delivered (vice versa for you if you get pinned). If after 3 match attempts the damage counter isn’t at 0 the bout will end with the referee having counted the 3-count.

It’s surprisingly simple to get to grips with, You’ll quickly learn that it’s often quicker & easier to just work on lowering their health until it reaches danger then hit them with a finisher you’ve been saving. It’s the most effective way to defeat opponents & with an ever-increasing difficulty you’ll have to actually plan steps.

Even with all of that you’re still at the mercy of the randomness of gem matching. The random gem drops after you match mean you can often take massive damage in a short amount of time, forced to watch in dismay as your opponent fills his special move bars in quick succession.

Damage received after a match ends will result in that superstar needing healing. You can do this using health packs or by waiting it out. Health packs are limited in number but will regenerate over a period of time. You can of course get more by spending some real cash on the insane amount of in-app purchases but I’ll get to that later.

The game comes with several modes:

The road is the main single player content where you take part in a specific circuit/tour fighting different superstars until you reach the boss. Matches are awarded stars depending on how you did & earning 3 stars in each match unlocks hard difficulty. Then you have Limited Time Tours & of course Versus Mode. As content goes it’s fairly decent & the constantly changing Limited Time Tours helps keep things fresh.

Early in the game you’ll find yourself flying through battles earning rewards & new superstars with ease but like most free to play games it comes to a grinding halt with certain superstar types needed to actually do battle. Levelling up your superstar is an important requirement if you are to be able to progress but it’s a very limiting process. Far too many different elements are needed to make any significant changes later & you’ll quickly run out of gold coins (the main currency) forcing you to replay the same fights in a hope to gain meagre returns.

Unless your spending real money early on your progress will come to a halt. Its fun factor disappears & all you’re left with is the nagging feeling that you’d have to spend some serious cash to get anything out of it. We’re not talking about a couple of quid here, we’re talking big money.

In-game coins that can be used to level up your superstar & enhance their abilities. Cash are the premium currency & can be used for a multitude of things but mostly speeding up gameplay. For example, should your superstar lose you can continue the match for 50 cash with a new full health bar.

Cash comes at a cost; a real money cost & surprisingly WWE Champions bucks the trend by offering different prices! Hear me out, almost all free to play games follow the exact same pricing structure for their in-app purchases. The cheapest being between 79p & £1.79 while the most expensive normally costs £79.99.

If all of that wasn’t bad enough the game also has a number of timed packs that you can purchase. The Striker Enhance Pack is the most expensive (as of this date). It comes with 12,500 cash, 250,000 coins, the Godfather’s stylish hat & a load of consumables. I know what you’re thinking…. that’s a hell of a lot stuff in return for just a measly £100.

…but here’s the super important thing.

All of these items are consumable, you can spend them as quickly as you possible can. You’ll be left with nothing but further progress in the game. You can have a big roster of superstars that are all super high level but you paid to get them there. There isn’t any effort put in…you literally paid obscene amounts of money to be better than everyone else in a game that has a very limited shelf life anyway.

This madness continues to amaze me & to see a multi-billion-dollar company like WWE attempt to rob its fan base like this is disgraceful.

All of that aside, it can be fun game for its first few hours but it has no longevity because it has no variety. You’ll fight the same superstars over & over again just with higher health bars & attacks. Like most WWE games it already feels out of date with superstars included that are long gone from the company (King Barrett/Ryback). Most importantly though it’s just a gem matching game when you peel away the wrestling layers.

You’ll likely get a kick out of it for the first few hours. However you’ll quickly realise that WWE Champions wants your money. It’s not going to stop trying to pry open your wallet every time you load it back up.