A prequel to Wolfenstein: The New Order, The Old Blood follows B.J. Blazkowicz on a mission to once again infiltrate Castle Wolfenstein and obtain a top secret folder containing the location of Wilhelm “Deathshead” Strasse from the castle’s commander, Nazi archaeologist Helga von Schabbs.

Set in an alternate history of 1946, the game throws you neck deep into Nazi occupied territory that harbours dark secrets of an ancient past.  While it may feel as if you’re trapped in one of the worst places imaginable, you’ll soon discover that with the arsenal available to you and the fact that Blazkowicz is a one man Nazi killing machine; it may just be the Nazis that should be afraid.

Wolfenstein: The Old Blood changes little from the basic gameplay of The New Order. As such, it is an action-adventure shooter game played from a first-person perspective. To progress through the story, players take on enemies while navigating throughout levels. The game utilizes a health system in which players’ health is divided into separate sections, “health” and “armour”, that regenerate. If an entire section is lost, players must find and use a health pack or body armour piece, to replenish the missing health. 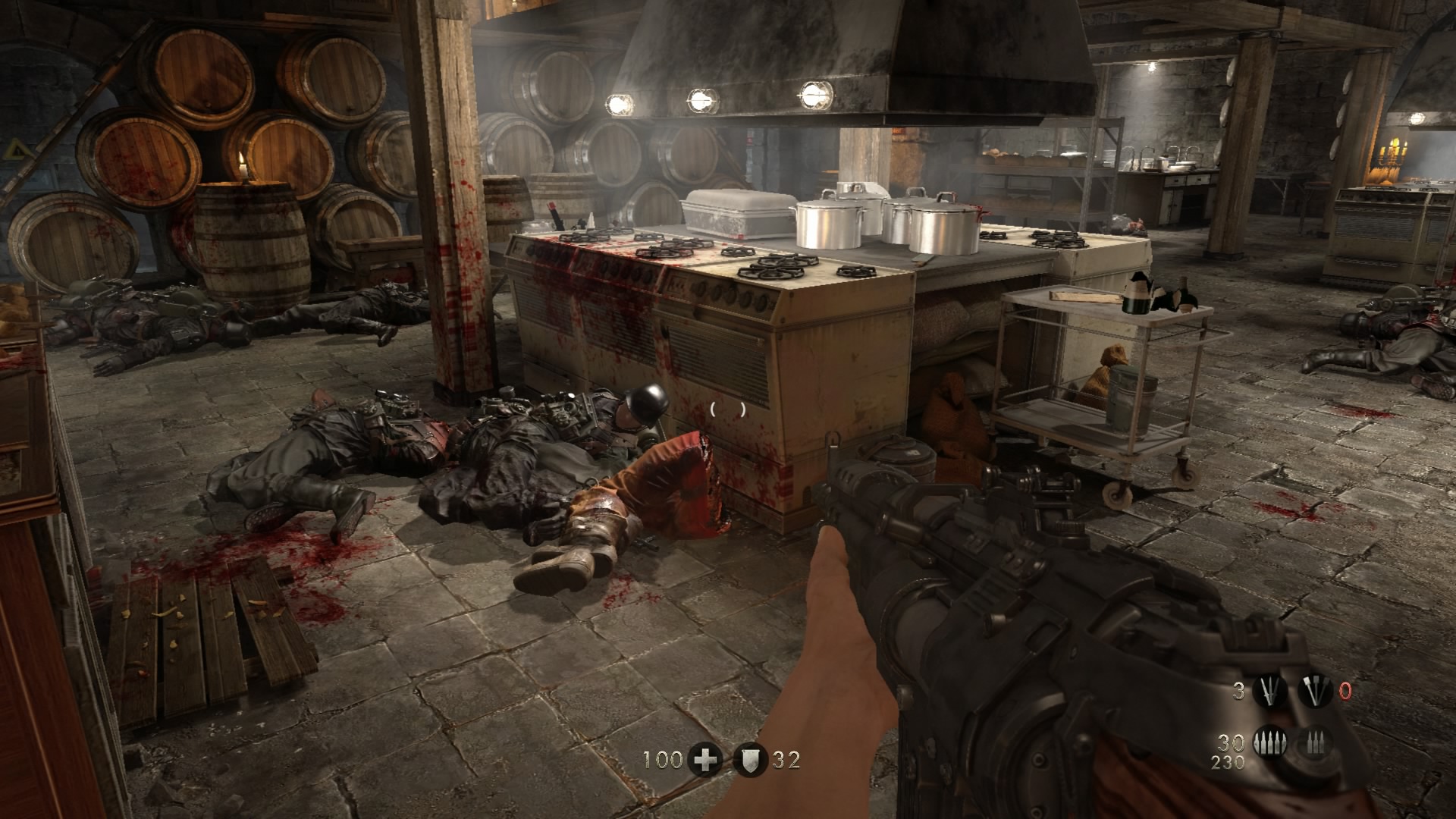 The game features a variety of weapons, including pistols, shotguns, and explosives, most of which can be dual wielded. A cover system is also present; players lean in and out of cover instead of the more common system where players lock into cover. 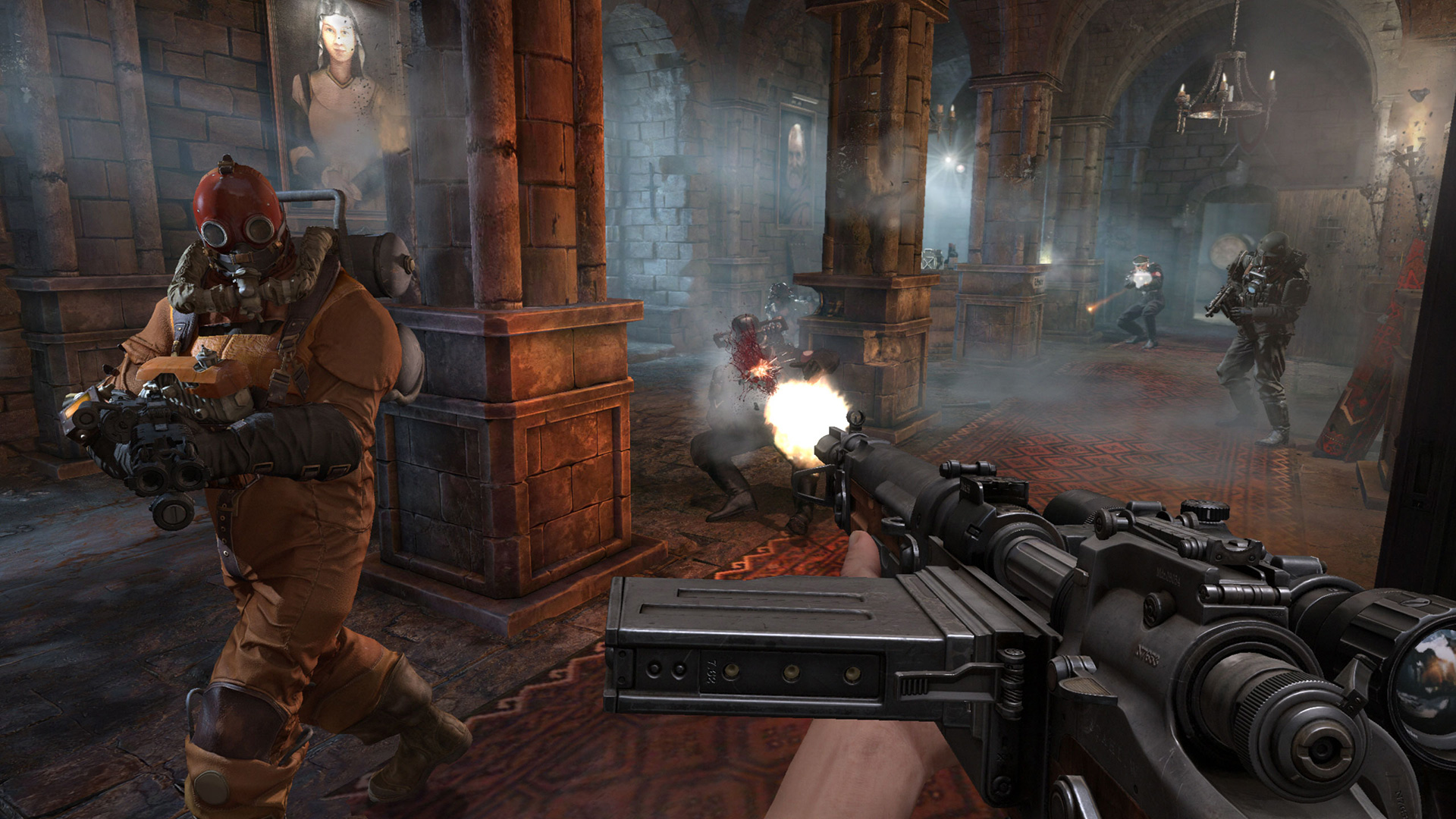 Entering the castle disguised as SS officers, B.J. and Wesley fail to find the folder and are captured by Helga’s lieutenant, Rudi Jäger, a massive and sadistic dog trainer who feeds captured prisoners to his mechanically augmented canines. While Wesley is dragged away by Rudi for interrogation, B.J. succeeds in escaping the prison cells and fighting his way through the castle. B.J. eventually locates Wesley strapped to an electric chair used by the Nazis for torture. Before B.J. can rescue Wesley, Rudi activates the chair and electrocutes him to death. Jager then feeds Wesley’s dead body to his prized albino dog, Greta, and straps B.J. into the chair, electrocuting him as well. B.J. breaks free, injures Rudi, and kills Greta. 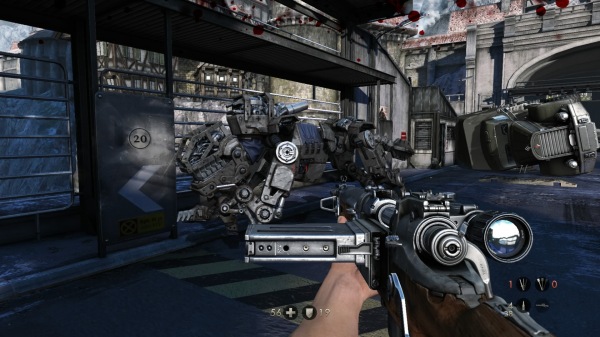 Escaping the castle, B.J. travels to the nearby village of Paderborn and meets up with the local German resistance leader, Ludwig Kessler, as well as Kessler’s assistant Annette, a young Jewish girl whom Kessler is sheltering from the Nazis. After some further events, B.J. makes his way to the village of Wulfburg, where Helga is conducting an archaeological excavation attempting to find a hidden underground vault containing occult knowledge previously possessed by King Otto I. 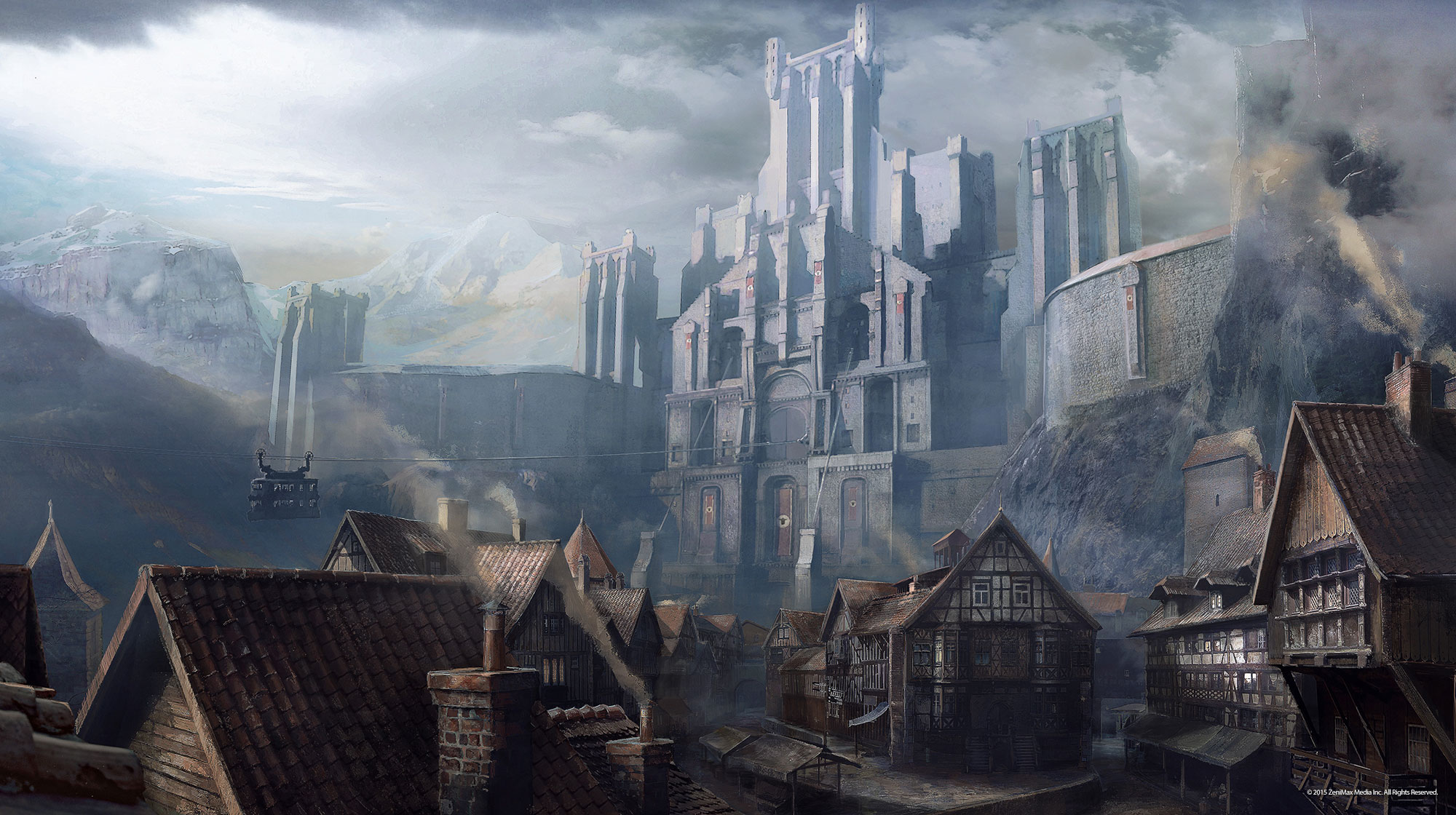 Later in the game, the opening of the vault releases a gas that causes anyone that dies within the vicinity of Wulfburg to reanimate as hostile, burning, zombies known as “shamblers”. B.J. fights his way through the burning ruins of Wulfburg while fighting through the zombified Nazis and civilians who died in the earthquake caused by the vault being opened. 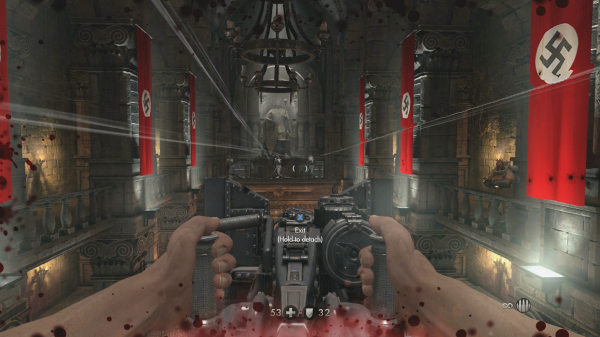 Can B.J. stop Helga once and for all before she manages to release “The Monstrosity” in hopes of controlling and using it against her enemies? 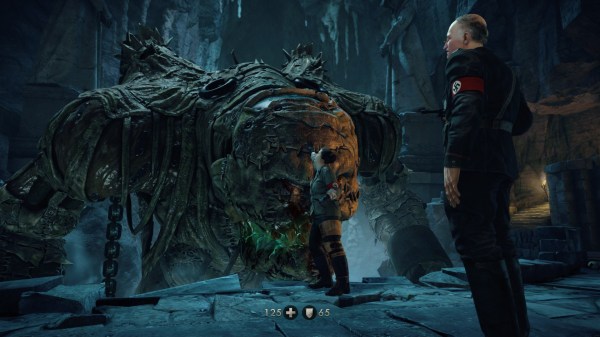 Wolfenstein: The Old Blood is quite simply more of what I loved about The New Order. Its tense, explosive, violent gunplay is as satisfying as ever; laying waste to Nazis has never been this much fun.

The guns are absolute beasts of destruction, they’re well designed and feel great to wield around and fire; it makes you feel like a badass. Stampeding B.J. towards a horde of Nazis while duel-wielding two huge automatic shotguns leads to only one thing, a bloody mess. What I’m trying to say is that the gameplay overall is highly action-packed and as solid as a shooter can possibly be. 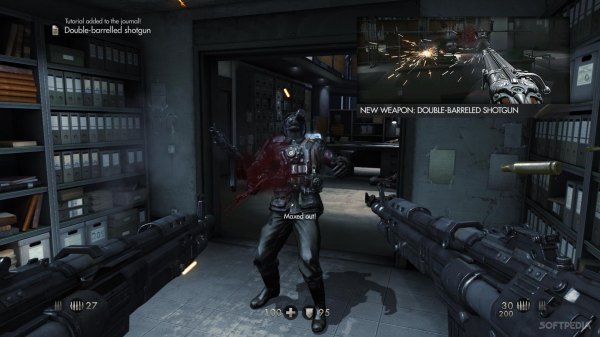 The Old Blood also introduces several new weapons to Blazkowicz’s arsenal, the most notable of which is the new melee weapon, a pipe which can be split into two parts. In addition to being the implement of many amazingly gory executions, the pipe is also used for the new wall climbing mechanic. 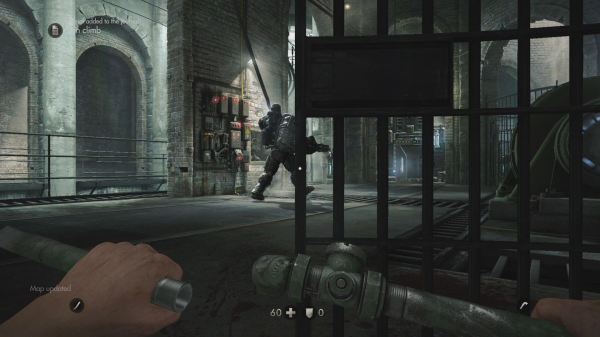 One of the things I enjoy the most about these games (other than nailing headshots on Nazis) is the truly fascinating look at the mysterious Nazi war machine and their heavy interest in the occult and unearthing darkness.

Believe it or not but killing Nazis does start to get a little old after the first 500 and thankfully the game mixes things by throwing Nazi zombies at you. It’s a nice change up even if they offer little challenge against your arsenal of destruction. 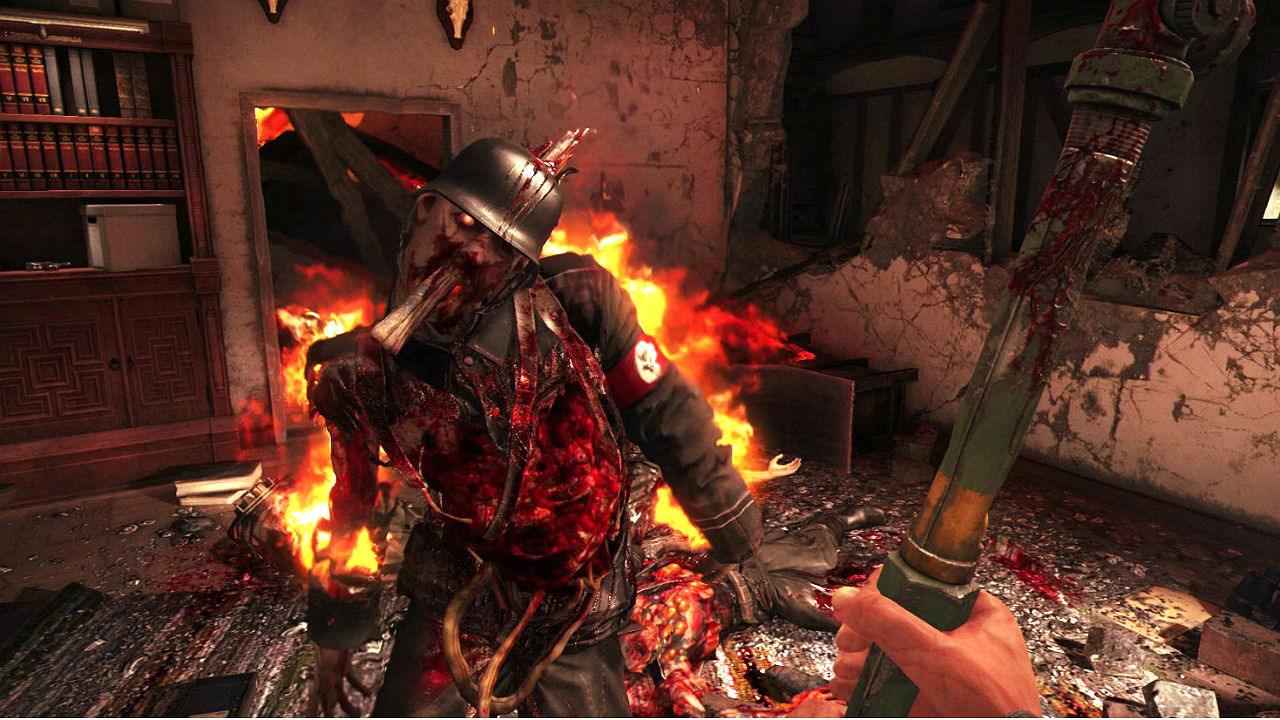 I really like Blazkowicz as the protagonist, he’s quite one dimensional but his narration of the events taking place add some nice depth to his character. The Old Blood does introduce a couple of secondary characters that seem interesting on the surface but are given very little screen time that it’s hard to truly invest in their stories.

If all of the above wasn’t enough, The Old Blood is one of the best looking shooters on the Xbox One. 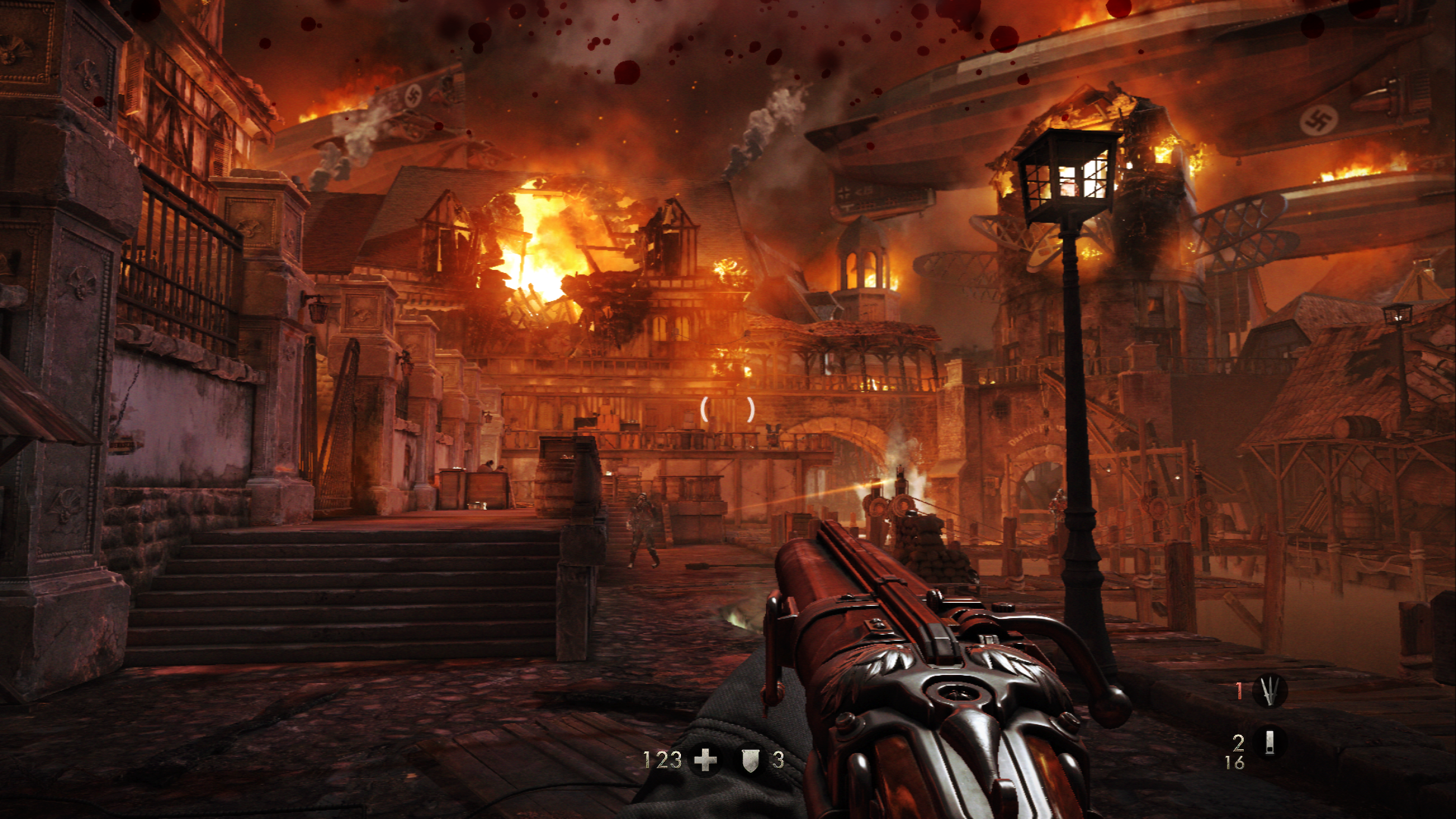 Making another return are the nightmare levels that take gamers back to lovingly recreated levels from Wolfenstein 3D. Each sequence is hidden somewhere in each level, provides a nice diversion, and issues a reminder to just how far the series and genre has come. 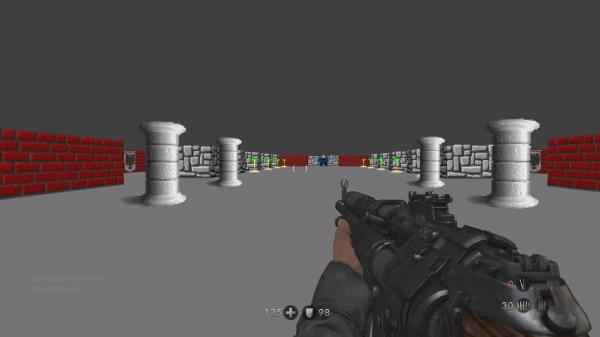 Additionally, there are challenge maps which are unlocked by completing combat scenarios in levels to which they are attached; there are ten challenge maps that you must gold medal. The only way to earn this gold medal is by playing the level on either I AM DEATH INCARNATE! or ÜBER difficulties and doing very well.  Obtaining a gold medal in each of these challenges isn’t easy, many will find it impossible as it requires you to headshot just about everybody but you’ll feel a huge sense of satisfaction when that gold pops up after the points of totalled.

Wolfenstein: The Old Blood is a fantastic prequel that ends in a way that leads nicely into The New Order. The gunplay is as fun and satisfying as any that I’ve ever played and the story, while quite simplistic is still very interesting and compelling due to the subject matter. It drags in places but will throw a new weapon or something else at you before you get a chance to get bored.