What did I just watch? What the fuck did I just watch? Ok, let’s do some simple maths here…From Dusk Till Dawn: Season One is 10 episodes long. Oh yeah, imagine my shock & horror to find out that not only does it have a second season but it also has a third, someone take the fucking wheel.

Am I being harsh? Have you seen it? If you have let’s be honest here, it is terrible. Stretching an idea out to such an extent that it snaps & whips you in the face leaving you bloodied, bruised & even more confused.

If the show is to be its own thing…why is most of the first season a remake? Why does almost every scene get redone in a different & worse way? Why do some of the better moments from the film get dropped for another lengthy ‘talky’ bit? Why spend 7 episodes building towards the vampire scene in the bar only to have it last 5 minutes? Why make the preacher character not just unlikable but kind of creepy? Why cast Jake Busey as sex machine? Why snake vampires? Why does it get so complicated? 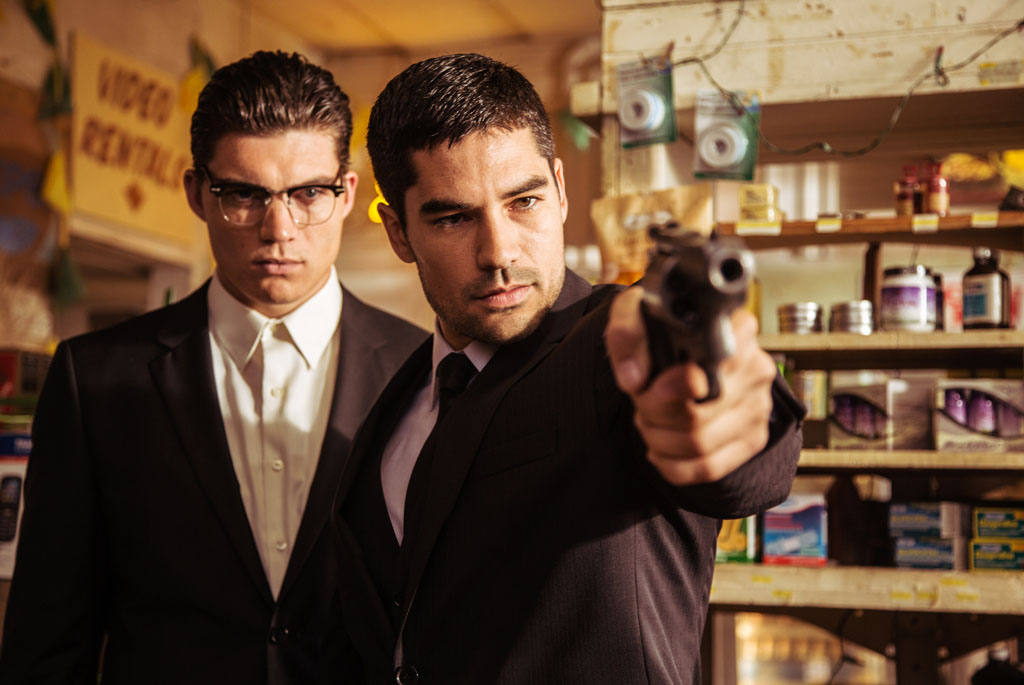 The thing is I get it, I can see what the plan was here. The movie had enough mystery surrounding it that an expansion of that was definitely a good idea. A series that focuses on the vampires & their history set after the events of the film would have worked a lot better. I doubt it would have been great but it wouldn’t have been this abomination.

Instead we get the plot of the original movie stretched out over 7 and a half hours with new plot twists, new characters & a background story involving a cult. Every time it looked like the series might be brave enough to forget about the movie altogether, we get another scene or line of dialogue jammed in awkwardly. It’s a mess, all over the place with a total lack of competent story-telling.

The Gecko brothers, Seth (D.J. Cotrona) and Richie (Zane Holtz) are criminals on the run. They robbed a bank & ended up killing several people as well as a few policemen. After running into Ranger Earl at a gas station, the brothers kill him too but get injured in a shootout with Ranger Freddie who vows to get his revenge on them for killing his mentor.

The brothers are heading for the Mexican border where they will meet with the mysterious Carlos who is going to help them escape. The pair end up taking the Fuller family hostage (Jacob, the father (Robert Patrick) and a preacher who has lost his faith after the death of his wife, his adopted son, Scott & his daughter, Kate or as he calls her, Katie-cakes. Its so fucking creepy. 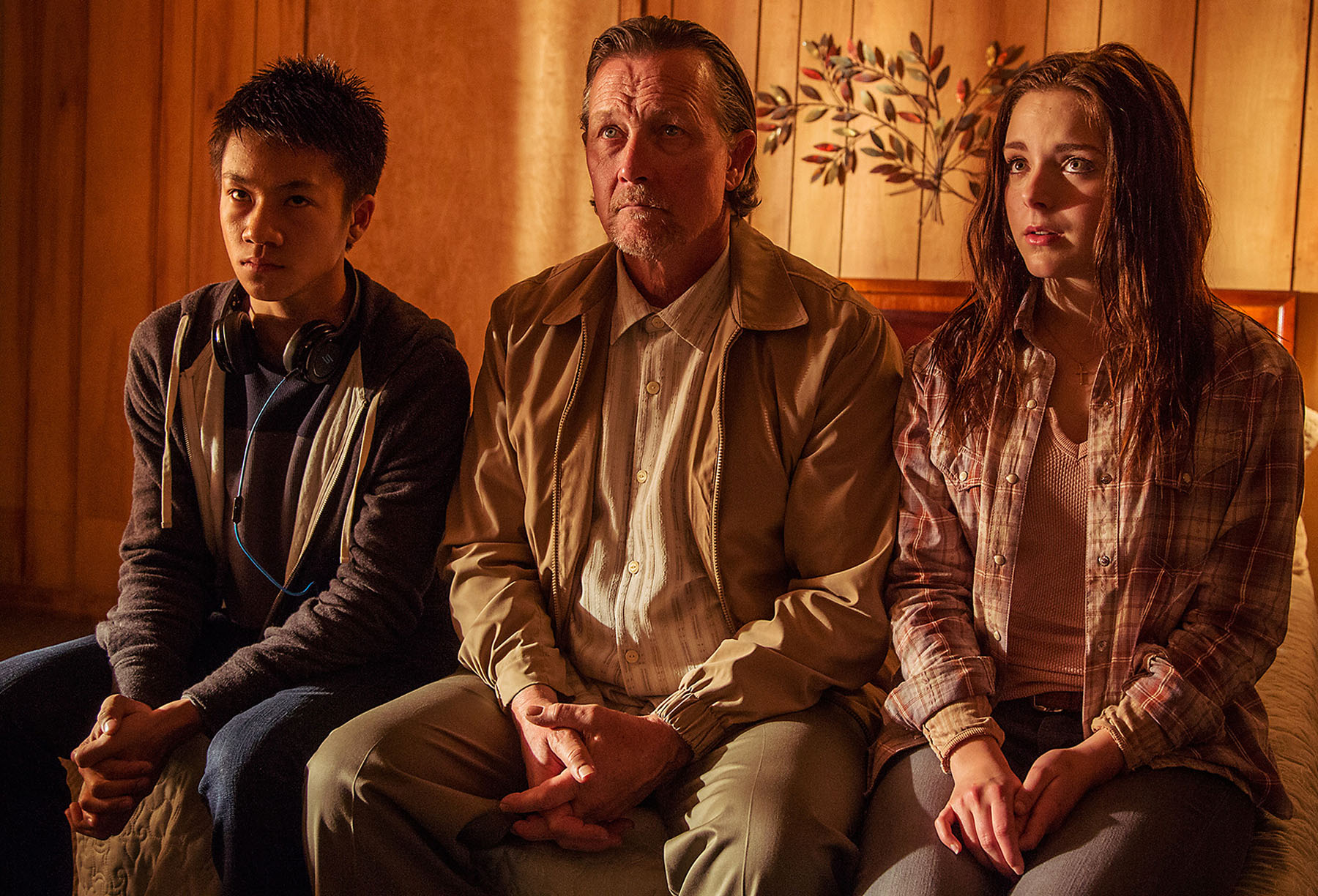 The group get across the border, eventually (I told you this show is dragged out) & go to a dive bar/strip joint called the Titty Twister & await Carlos’s arrival. Meanwhile Ranger Freddie has left his wife & baby daughter, attacked other policemen & snuck across the border to try & catch the Geckos.

I get it, he wants revenge but abandoning his wife & baby daughter just to avenge his mentor? Losing his job & realistically looking at some custodial time? Calm the fuck down, Freddie.

Anyway, if you know the plot of the movie this bar is actually a front for hungry & evil vampires. Here it’s kind of the same thing except they have a kind of snake-like thing going on instead. All of this occurs in Episode 7. Yeah, 3 episodes from the end & it finally gets going…albeit briefly (this show adores stopping and starting).

So what else is going on? Not a whole lot to be honest. Seth & Richie are constantly at loggerheads & I found that frustrating as I never believed that they loved each other. Richie’s psychotic tendencies have been completely played down to be replaced with a kind of psychic link. Yeah, you read that right.

Jacob Fuller wants his family to reconnect since the death of his wife but is struggling mainly because of poorly written, repetitive dialogue. He holds secrets back from his kids that inevitably bite him in the ass even though there is no reason to withhold the information from them. We’re not talking about toddlers here, these are young adults, and they could have handled it.

The biggest disappointment (beyond the snake-vampire thingies) is Kate who is such an average actress given very few important scenes, who rarely fights back & spends way to much of the time screaming. Scott is forgettable, so much so that his death is off-screen (although he does get to be a vampire this time). All interest was lost though when he has a vampire strop over never being fully accepted into the family. Teenagers huh?

Seth & Richie…they’re both good actors & pretty convincing. They both look a bit too young to have the experience that is suggested here but it’s a minor complaint in a series filled with major complaints. It’s not really their fault that a lot of what made the Gecko brothers cool in the movie has been pretty much removed here. Seth tries to channel his inner-Clooney but it falls woefully short & Richie never stood a chance of out-creeping Tarantino.

Midway through episode 9 I realised this show wasn’t going to get any better. That I had seen the best it had to offer (first episode & part of episode 7) & that all I could hope for was a satisfying finale.

Ha, guess what? In what must have been their desperation to leave themselves breathing room for the second season we get the most unsatisfying, unexciting finale they could have come up with. Nothing is resolved really, loose ends aren’t tied up & once again it takes stuff from the movie & makes them worse.

I don’t know who could enjoy this show. The idea behind it is sound but the result is so poorly executed that I can’t believe it has lasted this long already. Slickness doesn’t make up for a terrible story. 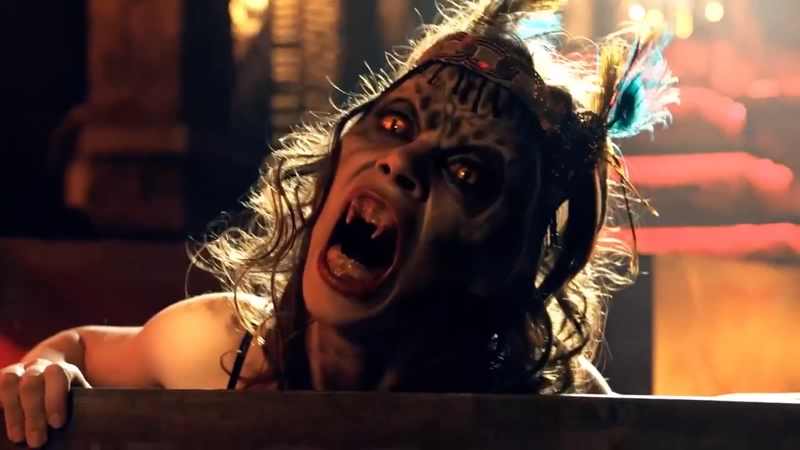 I sighed with relief when the end credits rolled than panicked when I saw it was about to start episode one from season two. I might need some time before I can watch that one.

From Dusk Till Dawn - Season 1

0 thoughts on “TV Series Review: From Dusk Till Dawn – Season 1”