Steredenn, in the words of the developer, is a frenetic and chaotic space shooter, carved in big beautiful pixels with insane boss battles. Embark in your ship and engage the fight against dreadful space pirates in a never-ending combat for your survival. The game is fast, addictive, hard and action-packed.
Some of that rang true for me. It is quite beautiful and pretty fast but mostly, it is just hard. Frustratingly so.

Steredenn seemed like a strange name but a little research shows that it is actually a translation from the language Breton which is spoken in Brittany in France and loosely means Stars (though Steredenn is the singulative). The game is brought to us by Pixelnest Studio who are a French company based in Rennes. They have a little history on PC and Steam in the shoot-em up (shmup) arena though this is their first venture to current gen consoles.

Like many of the “indie” games that have arrived in recent times, the game is quite beautiful to look at. It seems the lack of funds available to these smaller guys forces them to look for alternative ways to make their game look good such as hand drawn, painted or, as in the case of Steredenn, an arty pixel style. It looks good though and is just pixelated enough to make it look retro without ever feeling retro while the backgrounds a big, bright and full of colour. The game loads quite quickly and you definitely get the feeling that they have gone for a very basic, uncluttered, less is more game here. There is a small menu with just a few options and the smallest of tutorials with very little back story. That back story is what you would expect – you are the pilot of a spaceship and are in training (the tutorial) when you come under attack and start the game. That is your lot but to be fair, there is little point in a story in a game like this especially as there are no really obvious breaks in levels to further that story. Training teaches you to move up, down left and right and how to fire your main weapon as well as switch to and fire your secondary weapon. That is it for the controls so it really is a simple game to pick up and play. 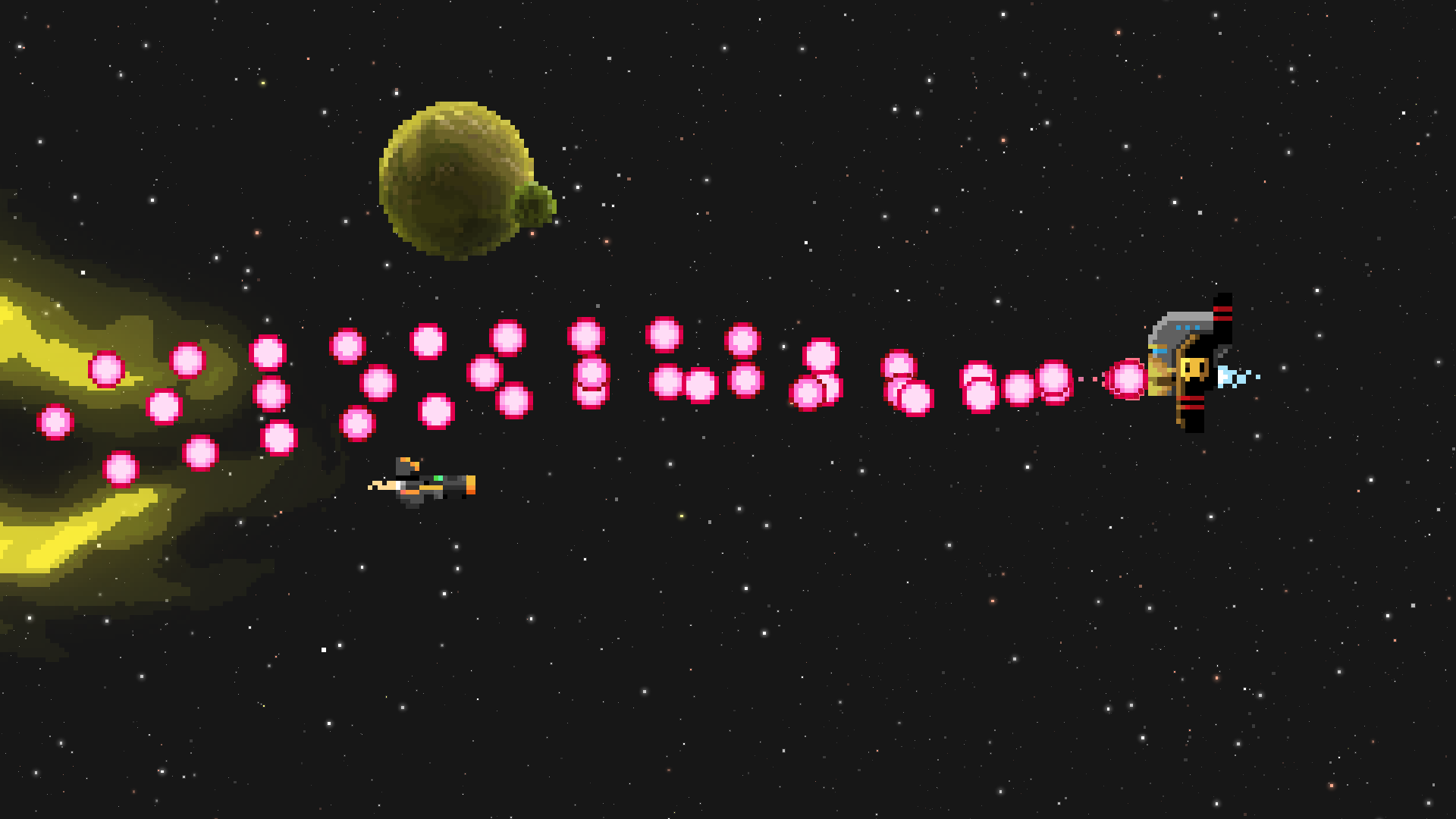 Steredenn works sort of like an endless runner game. There is no real end and no real levels and instead you work across this infinite loop which is broken up by boss battles. The levels are mostly randomly generated though after enough time playing, you will start to notice slight patterns in the generation. To try and add a bit more excitement to the game within each section and before you hit a boss there are certain types of enemy drop ships that, when destroyed, drop a new weapon. These drops are random and you can choose whether or not to pick it up as they are not always of benefit. The weapons are pretty cool. You start off with a standard blaster that shoots a stream of bullets directly out in front of you and can upgrade through many weird and wacky alternatives from the standard shotgun, rocket launcher, 3 way and 5 way blaster through to weapons that turn your ship into a giant saw, clamp or give you a huge laser. Generally the best weapon to have depends on the section of the game you are in and that makes it really difficult as the drops are random. You could be really struggling with your blaster, get a weapon drop, pray for a long range laser but get a saw.

As well as weapon power ups, you do also get the chance to upgrade your ship once you beat a boss. The fragments he leaves behind turn in to a set of power ups of which you get to choose just one. There are a fair few of them such as a couple extra health points, an increase in power, and an increase in laser energy or even in increase in the power of a weapon though make sure you actually have that weapon first. I remember choosing to have powerful rockets a couple of times before realising it doesn’t give you rockets, you have to already have them to make it powerful.

Sounds like a great game right? Well, maybe not. Here is the problem I have. The game is hard but not hard to the point of being challenging. It is hard to the point of being extremely difficult for the casual market (maybe even for the non-casual market). As far as I can see there are around 10 bosses to face to complete a single loop of the game and start back at section 1 and so far, with hundreds of attempts, I have never beaten the 3rd boss. I have never even come close to beating him. I would say, if I have played this game 100 times then I have made it to the 3rd boss three times before being obliterated, beaten the second box maybe 10 times and beaten the first boss maybe 20 times. In fact, in the majority of games I have played of Steredenn I have died long before reaching the second boss. The game demands luck and demands perfection. There are no health pickups and no healing. To heal, you need to make it to a boss, survive him and then you start the next section with full health and repeat. When you die, there are no continues and no ways to upgrade your ship or weapons to make you stronger for the next run. You simply start all over again, fail again, start again, fail again etc….

Why there isn’t an “easy” mode is beyond me. I can imagine how much I would have liked this game if each time I died, I levelled my ship up a little so I grew in strength and made it a little further but none of that exists. Instead I have played this game for hours and not made it through more than a fifth of it and unfortunately never will. 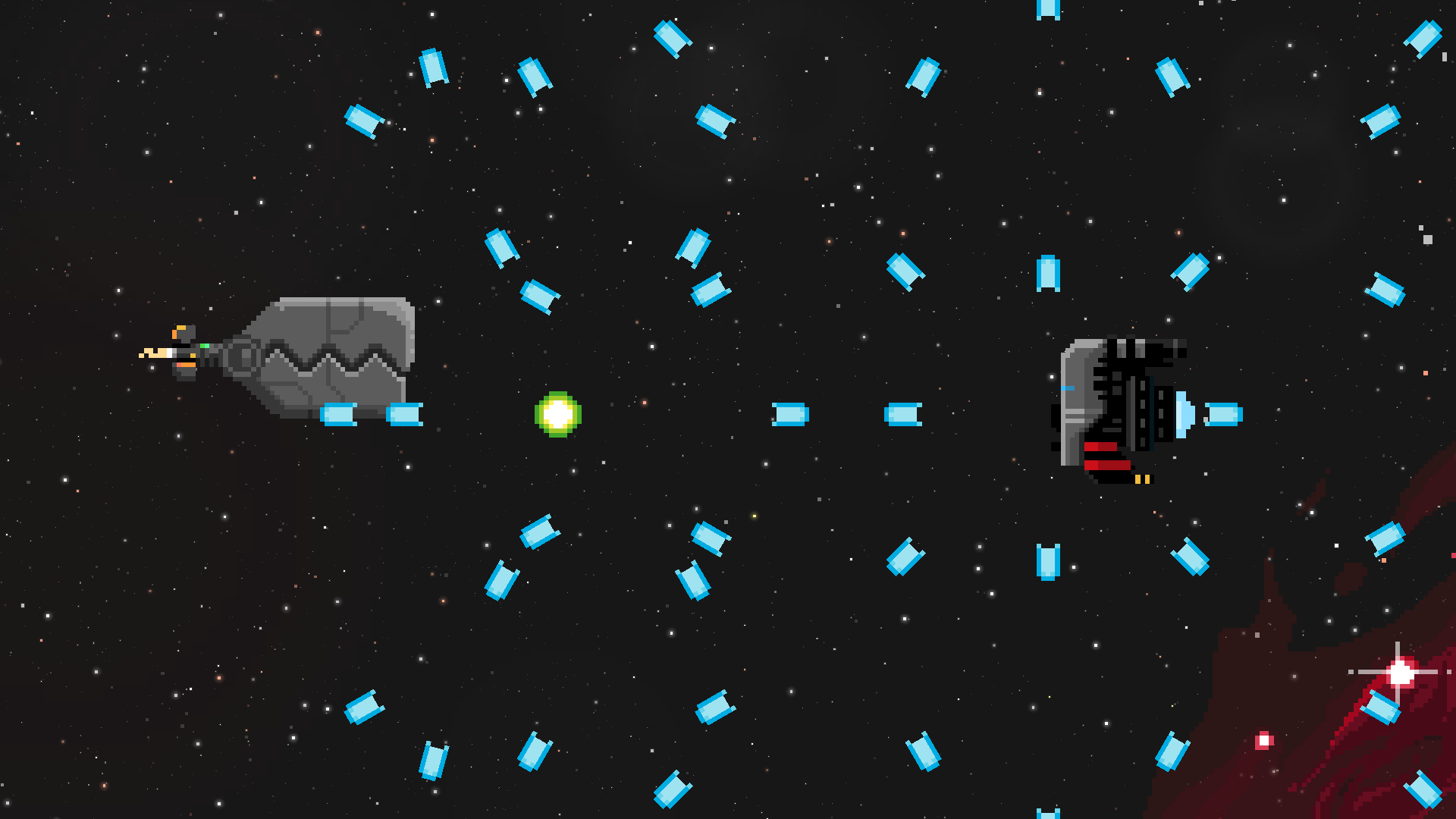 That is a huge disappointment to me as I find this game really appealing. It looks great, the music and effects are big, loud and rocky and the controls are as smooth as can be but it is just way too hard.

Checking the other menu options didn’t help me much either. There is a “Daily Challenge” mode where you and every player get the same set up and try to survive and score the highest position on the leader board. This is a little more fun as at least you feel like everyone is probably dying a lot here though I doubt many would envy my leader board position. As you start this mode with random weapons, you can sometimes feel quite capable, for a few minutes at least.

Other than that, there is a mode where you get to fight/practice the bosses you have beaten – just for fun. This confuses me as surely it would have been better to allow me to practice fighting the boss who I can’t beat not just the two that have already been beaten. As for the bosses, from what I have seen they are as lazy as can be. The same boss is used for every level end that I have reached but he just grows in size and has different weapons. You get a small one, then the same guy who is a little bigger and so on. Maybe they improve as you make it further but a few different boss designs would have been the way to go here and wouldn’t have been too difficult.

Despite all of this, I do actually enjoy playing the first section of this game and most of my frustration is born from my desire to experience more. I am just so disappointed that I probably won’t make it much further than I already have as I really want to.

I understand now that this game was not meant for me and I am lucky to have been given a copy for reviewing but, as the epitome of a casual gamer though perfectly capable, I am certain that a great many people of my skill level paid good money for a game here that is not meant for them. If you are an expert at games like this, I think you are probably in for a real treat as this will challenge you but plays really well but for anyone who feels they may not be an expert gamer, either prepare for a very small amount of gaming or just steer clear.

I actually feel pained having to score it this low as when I started playing this, it felt like it was going to be an 8 or 9 out of 10 but loads of attempts later with barely any progress have killed it for me. Well done to Pixelnest for making a great looking, responsive and challenging game but they must know that unless they cater for everyone, they are tapping in to a much smaller market. Steredenn looks like it is for everybody but it really isn’t and that is a real shame as it could have been brilliant.