Steppy Pants is a walking simulator, yep, that is a thing, that jumps on board the currently popular naming convention like Crossy Road or Flappy Bird and the like. Silly name aside, developers Super Entertainment have put out a simple game that is frustratingly addictive.

This review relates to version 2.1.1 specifically.

In Super Entertainment’s own words – “Learn to walk….again! Steppy Pants, the most realistic walking simulator you will play this year! Keep your cool when faced with insurmountable odds, like reckless drivers and an inexplicable ability to step on sidewalk cracks. You will laugh, you’ll cry. You’ll remember just how much fun you can have walking down the street”. 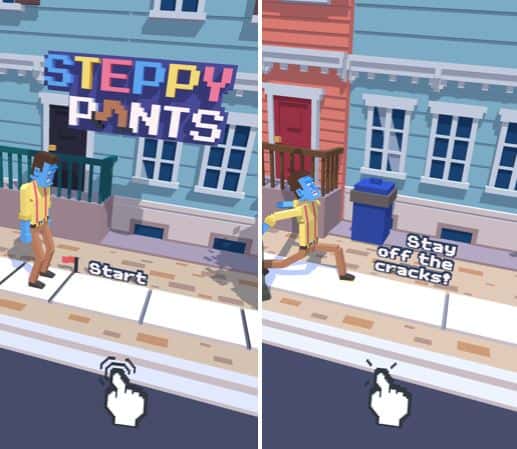 That statement is dripping in sarcasm and irony of course but it is fun. The aim of the game is to walk forwards. Sounds simple enough but it can be a challenge. Tap the screen and his leg will lift, release the screen and he will put it down. Tap again and his other foot will lift, release to put it down. Congratulations – you are walking, so just keep going. Keeping going is where the difficulty comes in. The sidewalk is littered with hazards. The real skill comes in putting your foot down at the right time, avoiding the hazards.

Hazards range from dynamite to cracked paving slabs which will all trip your character up and see them flop to the floor like a rag doll. There are also zebra crossings of sorts where you will have to time your crossing to not get hit by the oncoming traffic. On top of that the paving slabs are unevenly spaced and putting your foot on any of the gaps between slabs will see your walk come to an end. Get a high score by making it as far as you can. A decent walk will see you pass a checkpoint where you will restart from so you don’t find yourself stuck repeating the same bit over and over. 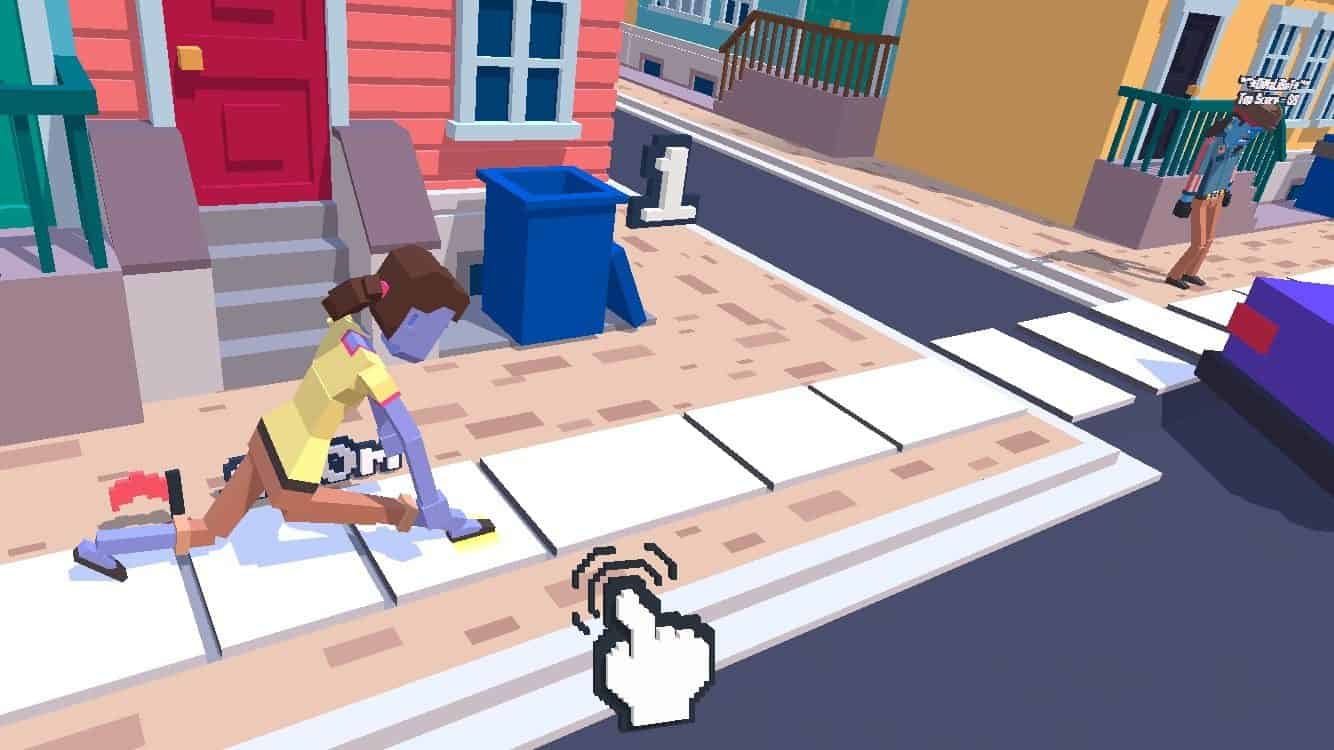 These little changes in scenery are welcome and of course the difficulty ramps up the further you get. This is usually just through more hazards and smaller spaces between paving slabs. As you try for those high scores, you also get to see other characters standing to the side at the point where they failed. These are a great little motivator to push you on to try to bypass their score. There are also a few different levels with increased difficulty that are unlocked by making progress in a previous stage, just to add some more to the longevity.

As you play, you will get gifted with coins every few hours. You can also collect a few on your walks but there aren’t many here. Get enough coins and you get a chance to win an outfit or piece of an outfit. This is done by way of a comical little visual where your character is shot off down the road  and whatever piece of pavement you land on contains your prize. Pointless but a nice little comic touch. The outfits don’t actually have any impact on gameplay at all but there are lots to collect so add an extra element of depth to the game.

The graphics are blocky animation, like Crossy Road and are good to look at. Lots of bright colours and animations take place as you walk down the road to keep it interesting. Musically you get the repeat of  a little jazzy number and effects when you fail.  Another nice touch is that the last few steps of each run record as a GIF which you can share directly to social media or email accounts. You can spend real money on add-ons that are all costume related. These appear as groups of people you see along the sidewalk while playing. You can click on them, or not, and buy a range of new clothes. They are completely unobtrusive though and you don’t need to, to get maximum enjoyment from the game.

One negative though is that Steppy Pants really seems to eat battery life, more so than many other games I have played. You can almost see your percentage dropping as you play. It is a short burst sort of game though so this wont affect you too much, You are unlikely to play it for hours on end, more of a ten minutes, the stop and then pick up and play again a little later. 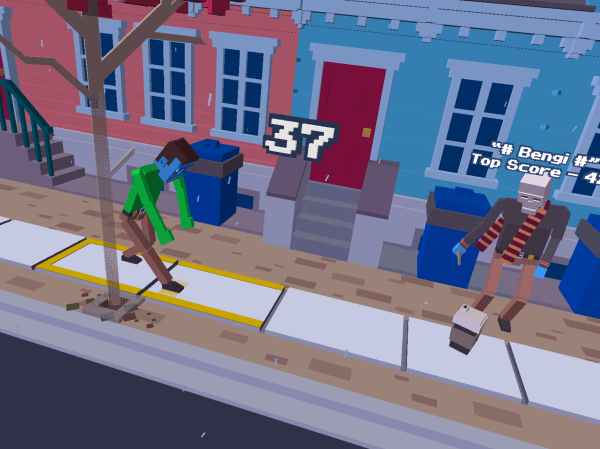 While it is neither a positive or a negative, I would also point out how similar this game is in structure to Crossy Road. Obviously it is very different in gameplay. Also in the angle at which you play. The way you get coins, though, feels the same. The menu buttons are the same. As is the little snapshot of a GIF which looks identical. Even the way you win prizes has similarities. It kind of feels like you are playing a zoomed in version of Crossy Road because of that.

Still, what you get with Steppy Pants is fun little bursts of gameplay packaged in a bright and colourful game. It is great fun to play. There are so many costumes and extra levels available, you will get loads of game time out of it. If your battery lasts that long of course. No ads, no reason to spend real money unless you want to, Steppy Pants is a true free to play game in every sense of the word.

Steppy Pants is available on iOS and Android. You can find out a bit more of it, and get download links from the Steppy Pants website here.